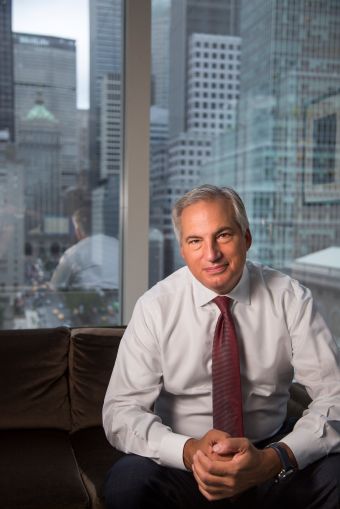 Roughly 30 years ago, Michael Colacino, now the president of the global commercial real estate services firm Savills Studley, stumbled upon an idea that was ingenious and straightforward enough for almost anyone to understand it:

Bundling up leases and selling them to investors—just like securitized mortgages.

It’s the trillion-dollar idea that has still not come to fruition.

At the time Mr. Colacino was dismissed by veterans of the industry who said he didn’t understand how leases work and how complicated they can be.

“I came to Studley to get the kind of street cred to be able to understand it. Now I know how these leases work,” he told Commercial Observer. “I got distracted and ended up running the company.”

In the early days the industry was slow to adapt to technological change. Mr. Colacino said even halfway through his career, using an Excel spreadsheet was considered an “avant-garde analysis.”

“If you can input the lease into a database, there’s no reason why you can’t underwrite it and slice and dice it,” Mr. Colacino said.

Mr. Colacino concedes that leases can be complex documents that include clauses about damage and destruction, insurance and non-disturbance provisions. However, those obstacles are not insurmountable. His solution: separate leases into two sections, one that breaks out the fundamental economics of the deal and can be standardized and underwritten and the other for everything else.

“The probability of it eventually happening is absolutely 100 percent,” he said. “The mysterious part is why it hasn’t already.”

But sprawling corporate campuses, shopping malls and even trophy towers are lumpy assets. It’s expensive for owners to get in and out of them and it’s difficult to monetize the consistent cash flow that’s generated by leases.

That’s why some, including Mr. Colacino, believe the corporate real estate world needs to take a page out of the residential real estate playbook. They’re pushing to securitize leases, packaging them up into different pools and selling them off to investors to finance more development.

It’s already been done on an enormous scale in the complex and cumbersome housing industry. More than $5 trillion of residential mortgage-backed securities were issued by government agencies between 2011 and 2014 alone, according to data from Freddie Mac.

Meanwhile, issuers of commercial mortgage-backed securities originated $106 billion in loans in 2014, according to the Mortgage Bankers Association.

And there is a long track record for securitizing assets completely unrelated to real estate—everything from student loans and box-office sales to Michael Jackson’s music collection. Moreover, leases have been securitized on countless physical assets like printers, copiers, furniture, industrial equipment and even jetliners.

David Rose, who has been dubbed the “father of angel investing in New York,” said he wouldn’t be surprised at all to see lease securitization in the next five years.

“We are in a world of exponentially-growing technology. Financial markets are always looking—especially in boom times—for interesting new approaches to investing,” said Mr. Rose, the chief executive officer of Gust, a global funding platform for early-stage investments.

Industry executives, academics and investors that CO spoke to for this story confirmed that commercial real estate leases are not currently being securitized on a wide scale. And there are several good reasons for why that is.

Unlike residential and commercial mortgages, corporate leases are not standardized. They are riddled with options that make them cumbersome and potentially risky to securitize.

“It never got off the ground because it just didn’t make a tremendous amount of sense in the structural complexities of it,” said one senior CMBS executive at a major global bank.

Moreover, leases aren’t backed by physical property that can be seized if the tenant fails to pay up. That creates far greater risk in a bankruptcy situation, especially because bankruptcy courts can allow struggling tenants to escape from lease obligations that are deemed less than critical.

“I’m not sure what the fallback is if the lessee stops paying,” said Huxley Somerville, group head of U.S. CMBS at Fitch.

There’s also the challenge of scaling up to a batch of lease securities large enough to offer investors the kind of duration, geographic and tenant diversity they’d be looking for.

“To do securitization you really need a pool. It’s hard to get a portfolio of commercial buildings together to do this,” said Steven Hirsch, a former Morgan Stanley executive who now works as an advisor and consultant in structured asset-based finance at Greenwich, Conn.-based merchant bank AMG Capital Advisors.

The other problem is it’s not totally clear there is a need at the moment for another source of commercial real estate financing. It’s not very difficult for sensible projects with good sponsorship to secure financing right now, industry insiders say. And thanks to near-zero interest rates from the Federal Reserve, borrowing costs are extremely attractive. It may not be like the heady pre-crisis days, but builders have plenty of options.

One key option is the CMBS market, which is already providing financing with an eye on lease incomes. In many ways, these securities are present valuing future lease streams.

“It’s a very buoyant market right now. It’s very robust,” said Mr. Somerville of Fitch. “There’s a lot of liquidity—probably too much.” He pointed to declining underwriting standards and more aggressive assumptions being made to support loans.

“The CMBS market is very hot. I’m not sure why now would be the right time to” securitize leases, said Stijn Van Nieuwerburgh, director of the Stern Center for Real Estate Finance Research at New York University.

Mr. Van Nieuwerburgh said that while securitizing commercial leases is theoretically possible, he fails to see the “business logic” behind it and questions the appetite for these exotic investments.

“Why on earth would they invest in these commercial lease securities if they could invest in CMBS instead?” he said. “I don’t see what kind of need this addresses that CMBS does not.”

Still, there are indications that lease securitization is at least being explored in some corners of the commercial real estate market.

“A very large retail and CMBS bank” recently made a preliminary inquiry with Fitch Ratings about putting credit tenant leases into pools of mortgages, Mr. Somerville told CO. He said he hasn’t seen a pool of credit tenant leases in at least the past decade, although real estate investment trusts used to be active in this space through unsecured bonds.

Mr. Somerville declined to name the specific bank, although he agreed the description fit Wells Fargo. The San Francisco-based lending giant also declined to comment on whether it made such an inquiry and declined to make an executive available for an interview about this topic.

Citigroup and J.P. Morgan Chase would also fit this description as large retail banks with a CMBS presence. However, people familiar with the matter said neither bank made a recent inquiry with Fitch regarding credit tenant leases. Both Citi and J.P. Morgan declined to comment.

Credit tenant leases make up a relatively modest corner of the overall lease industry, with only about $2 billion to $3 billion of such deals done each year, according to data from CBRE.

In this type of real estate financing, the landlord uses lease payments to secure a loan. The leases are typically “hell or high water” and typically, triple-net leases. The tenant is responsible for paying the costs on the property, including taxes, without the ability to cancel the contract.

The overall corporate real estate market is far larger. The total inventory of U.S. commercial office space stood at about 10.5 billion square feet as of the end of June, according to the research firm CoStar. Based on an average quoted asking rent of $22.72 and a seven-year lease term, the size of the total lease market is about $1.6 trillion, CoStar estimates.

“This is not chump change,” Mr. Colacino said. “It’s an enormously valuable asset that should be handled the way other assets are.”

That suggests a degree of sophistication the commercial real estate market may not be accustomed to. Mr. Colacino pointed to the tools and techniques that have become the norm on Wall Street and are favored by increasingly influential real estate players, including private-equity firms and REITs.

Enter LiquidBricks, an intriguing start-up that’s determined to use sophisticated technology to solve these vexing problems.

“We think to truly bring liquidity to the real estate market you’ve got to go after the lease problem,” said Dan Doney, who stepped down as chief innovation officer at the Defense Intelligence Agency in July to join LiquidBricks as chief technology officer.

“It is a potentially enormous marketplace,” Mr. Doney said. “If you can securitize property usage rights, you can create a mechanism that has enormous power, enormous scope and can reach very broadly.”

LiquidBricks wants to use blockchain—the powerful technology that underpins Bitcoin—to forge “smart contracts.” Blockchain has the ability to create decentralized trust agreements that can be easily verified and are irrevocable.

Mr. Doney said LiquidBricks has “really cool” proprietary technology that will allow the platform to create securitized baskets of income-producing assets (like leases). Those baskets will be liquid and can be priced by agents on behalf of the marketplace. He declined to be more specific because the company is in stealth mode until later this year and wants to maintain its first-mover advantage.

It’s easy to see how LiquidBricks and other efforts to securitize leases will face huge obstacles and deep skepticism from within the industry. The odds are clearly stacked against them.

Mr. Doney acknowledges he and his colleagues are “underdogs” and it’s very early in these efforts to securitize leases. However, he believes in the next five to 10 years this area will experience “explosive growth,” much like the peer-to-peer loan industry is enjoying now.

He believes lease securitization will emerge one of two ways: either a “Grade A-Plus” package of super high-end leases are packaged together at the top or there’s a grassroots effort led by a start-up like LiquidBricks.

“I would say it’s something whose time if not has come, is coming,” said Mr. Rose.