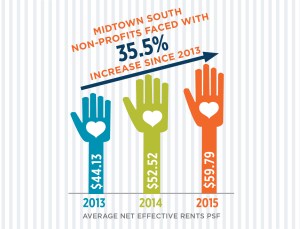 Nonprofits historically have gravitated to areas like Midtown South, where real estate was less expensive. But during the current expansion cycle, demand for space from other industries like the TAMI sector (technology, advertising, media and information services) has pushed Midtown South rents to historical highs. This has caused nonprofits to face significant rent increases, as net effective rents for this sector has jumped 35.5 percent in Midtown South since 2013. At $59.79 per square foot, average net effective rents for nonprofits in Midtown South are the highest of the three major markets. The higher rents have caused leasing activity to plummet in this market for nonprofits, with less than 50,000 square feet leased this year.

Nonprofits leasing space in Midtown are faced with a $53.52 per square foot net effective rent average, which has had the smallest increase of the three markets over the past three years, at only 8.5 percent. Leasing activity for this sector continues to dip in Midtown as more tenants migrate to less expensive areas of the city.

Downtown net effective rents for nonprofits are the lowest at $40.48 per square foot, a 26.9 percent increase from two years ago. This has caused many nonprofits to lease space in Lower Manhattan, where this sector has leased over 1.1 million square feet over the past 18 months, more than Midtown and Midtown South combined.