Peebles Corp. Hit With $10M Suit for Cutting Out Partner in Deal [Updated] 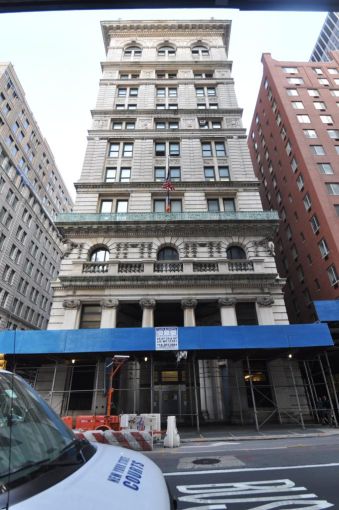 A Brooklyn-based developer is suing Don Peebles for millions in monetary damages for allegedly breaking ties on the redevelopment of 346 Broadway in Lower Manhattan.

This is the second instance this year where a former colleague has accused Mr. Peebles of shifty business practices at the building between Leonard and Worth Streets.

The Hoeg Corporation, a Brooklyn-based developer led by Daniel Hoeg, is suing Mr. Peebles and his Miami-based Peebles Corporation for allegedly terminating a joint venture the two formed to win the bid to redevelop the city-owned 346 Broadway as well as 22 Reade Street and 49-51 Chambers Street near City Hall. Mr. Hoeg is seeking at least $10 million worth for damages, according to court documents.

Mr. Peebles “blatantly reneged” on the agreed terms, the June lawsuit filed in Brooklyn Supreme Court Alleges charges, opting not to consult Mr. Hoeg and partnering with Elad Group instead.

The New York City Economic Development Corporation put out a request for proposals in 2012 on the Civic Center buildings, the lawsuit says. The two originally formed a joint venture for 370 Jay Street in Downtown Brooklyn in the spring of 2012, which the venture ended up losing out on. They set their sites on the Civic Center buildings, and were allegedly slated to split the benefits of the properties evenly: The Peebles Corporation would take 75 percent and The Hoeg Corporation 25 percent.

Mr. Hoeg claims in the lawsuit that he led the bidding process with the EDC, and shaped how each property would be repurposed. “Among other things, Hoeg Corp. identified the properties, cultivated relationships with key EDC personnel, drafted a detailed proposal and selected and retained architects, attorneys, engineers, contractors, land use and landmark experts,” the lawsuit says. Mr. Hoeg also tried buying the parking lot next to 49-51 Chambers Street for redevelopment as well.

Barry Friedberg, the attorney representing the Peebles Corporation, filed a motion to dismiss the case last month with documents that say Mr. Hoeg was paid as a consultant on the project. He told Commercial Observer that it was preposterous that the company would give that big of a stake to an adviser. “Mr. Hoeg was a low-level consultant,” he wrote in an email to CO. “His company was hired primarily to assist with the preparation of documents provided to the NYC EDC. It is implausible, to say the least, that a major real estate development company like The Peebles Corporation would agree to give a consultant 25 [percent] of a multi-million deal on a handshake.”

Things took a turn when Mr. Peebles in February 2013 decided to buy 346 Broadway for about $160 million without consulting Mr. Hoeg, the suit charges. Two months later he broke the joint venture between the two, according to the lawsuit, and opted to partner with Elad Properties—giving the Israeli investor a majority stake in the property—which was in the works to become a combination of condominiums and a boutique hotel. Mr. Peebles retained a 35 percent stake in the building, which the lawsuit estimates will net his company a $130 million to $170 million profit.

Things only got worse for Mr. Hoeg, he claims in the lawsuit, when he found out a deal to buy 49-51 Chambers Street fell through, leaving him “dismayed.”

The original lawsuit includes a letter as an exhibit from the Peebles Corporation to then-EDC President Seth Pinksy that says the two were partners in the joint venture.

In the motion to dismiss, Mr. Friedberg argued that a joint venture between the two was never formed in writing. “His company was a consultant paid a monthly amount to assist as directed,” Mr. Friedberg told CO. “At best, the assertions are allegations only, and those allegations are contradicted by the documents attached to the motion to dismiss.”

It’s not the first time that players in this deal have cried scandal at Mr. Peebles. His former head of development, Daniel Newhouse, sued the company in January, claiming Mr. Peebles promised him a 5 percent stake in the building, as The Real Deal previously reported. When Mr. Peebles sold the controlling stake to Elad, however, Mr. Newhouse claimed he never received his promised take. That case was tossed out in June, but the former executive tried to appeal the judge’s decision, TRD reported. The appeal was withdrawn and the case was settled, according to Mr. Friedberg.

Update: This story was updated to accurately reflect the amount of damages sought, as well as a comment for the Peebles Corporation’s attorney.