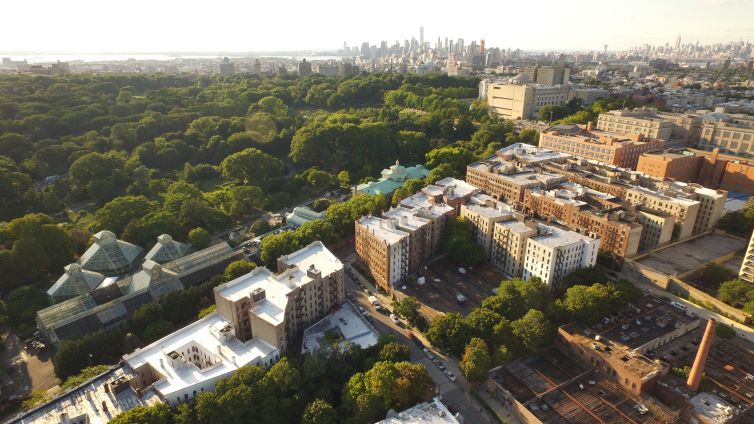 Want to build next to the Brooklyn Botanic Gardens? This might be your one and only chance.

That’s because the 22,000-square-foot plot at 111 Montgomery Street in the Crown Heights section of Brooklyn is hitting the market for a potential developer looking to likely build condominiums. The site has the zoning potential for 168,000 square feet of residential development, according to TerraCRG, the Brooklyn-based brokerage tapped by PWR Holdings, which is also the owner of LIVWRK, to market the property. With an asking price in the mid-$40 million, the team showing the property are highlighting it as a rare chance to build around Prospect Park.

“This is really one of the only parcels in North Prospect Park that’s available,” said Ofer Cohen, the founder and president of TerraCRG. “It’s a no brainer. We think residential developers are going to be really open to this offering.”

Mr. Cohen—who’s marketing the site with colleagues Melissa Warren, Dan Marks, Peter Matheos, Michael Hernandez and David Algarin—noted that development had been heavy across Prospect Park in areas such as Park Slope, and that this Crown Heights section was prime for the taking. It’s walking distance from the Botanic Gardens as well as the park and other area landmarks serve as a built-in amenity to residents.

Brooklyn has been in dire need of condo units in the $1 million to $1.5 million range, Mr. Cohen told CO, as a result of pent-up demand for rental units throughout the borough. The site at 111 Montgomery Street was previously studio apartments heavy, which Mr. Cohen added would likely change with a new developer.

The plot is zoned for 162 units in a 12-story building, according to marketing materials by the brokerage. That breaks down to 38 studios, 65 one bedroom units, 53 two bedroom units and six three bedroom units. That comes out on average to roughly $1,150 per square foot, which Mr. Cohen said stands well below $1,800 per square foot in other areas of Brooklyn.

Mr. Cohen said that a developer coming in would likely stretch that out into larger units, some being three bedroom. Either way, he added, the developer would be tapping into the gap of buyers looking for a relatively affordable condo—particularly young families looking for that first home.

“You have a demand from condo buyers for these kinds of [properties],” he said. “There’s a real need for families moving into Brooklyn to buy apartments within the $1 to $2 million range.”