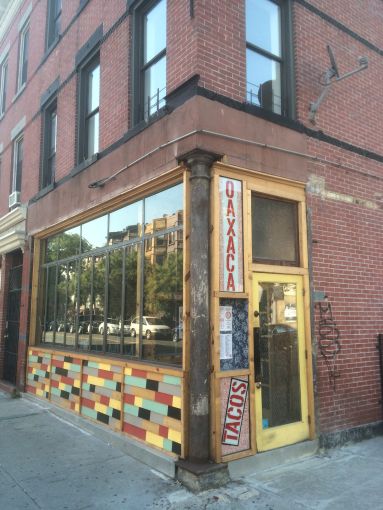 It wasn’t very long ago that if Fodor’s wanted to make a Brooklyn restaurant its top-ranked eatery, one would have expected something in Williamsburg—maybe Bushwick, if we were talking about Roberta’s.

Nobody should have been surprised when it named Crown Heights’ Barboncino pizza parlor at 781 Franklin Avenue as its top-ranked restaurant in the Aug. 17 list of where to find Brooklyn’s best pizza—signaling that we now live in the golden age of Crown Heights dining.

Indeed, it’s not just Crown Heights but Bedford-Stuyvesant and Sunset Park that are getting in on the act, with restaurateurs gobbling up space as fast as commercial properties hit the market.

Oaxaca Taqueria recently leased a 1,000-square-foot property at 478 Halsey Street at Lewis Avenue in Bed-Stuy. And it will soon open a 1,500-square-foot eatery at 406 Rogers Avenue at Sterling Street in Crown Heights.

This marks the second restaurant for the taco specialist in Bed-Stuy. The first, at 1116 Bedford Avenue at Quincy Street, opened in early 2014. With these locations, Oaxaca will have seven locations in Brooklyn and four in Manhattan.

RKF’s Alex Beard, who represented the landlords in the Bed-Stuy and Crown Heights Oaxaca deals, said that the taqueria’s owners are “getting a foothold early.”

Mr. Beard noted that the appeal of Brooklyn north lies in its ornate townhouses, which are similar to those in Park Slope and Prospect-Lefferts Gardens. The neighborhoods serve up a mix of popular retail stores, restaurants and bars, along with locally owned businesses.

And, of course, the emerging submarkets have cheaper rents. For now. Mr. Beard noted that rents in Brooklyn north may be 15 to 20 percent higher than a few years ago.

“It’s very challenging and difficult for a restaurateur, especially a chef-driven operation, to afford most Manhattan rents,” said Brooklyn retail specialist Geoff Bailey of SCG Retail. “When you’re talking about $300-a-foot rents throughout Manhattan for a 2,000-square-foot space and that’s a small restaurant, too, that’s a significant amout of money.”

When City Farm Corp. considered Brooklyn locations in which to establish Fawkner gastropub, which opened in Boerum Hill this past Saturday at 191 Smith Street, the principals started with a search in Crown Heights, according to one of the co-owners, Jim Carden. But the sites the team was interested in, he said, either weren’t on the market or their conditions weren’t right. Then a broker introduced the owners to the current Smith Street location.

Now Brooklyn-centric City Farm Corp., which manages The Bell House in Gowanus, Union Hall in Park Slope and Floyd in Brooklyn Heights, is interested in opening a place in Bed-Stuy.

“That’s the next place we want to explore,” Mr. Carden said. “People have been giving us locations in Bed-Stuy we need to look at. From what we understand, there’s a lot of opportunity there.”

Of course, as these neighborhoods have been heating up, the rest of Kings County—more typically associated with its dining scene—seems to only keep drawing more and more hotshot chefs with creative ideas.

Fredrik Berselius, the chef behind the now-closed, Michelin-starred Aska, is planning to open an Aska-inspired restaurant at 47 South 5th Street near Wythe Avenue in Williamsburg. Carla Hall, the former Top Chef contender and a co-host of The Chew, will soon be opening her first restaurant, Carla Hall’s Southern Kitchen, at the Columbia Street Waterfront.

“Brooklyn is becoming more popular, period,” said CPEX Real Estate Brooklyn maven Timothy King. “Any time you have an influx of new residents, those people need all kinds of services and [above all else] is food.”

But for a lot of chefs, Brooklyn is a good testing ground for new concepts.

“It’s an area where chefs and restaurateurs can explore,” Mr. Bailey said. “They have a market where economically they can take different risks or try out different things that might not be as proven.” (A case in point is two-year-old Shalom Japan at 310 South 4th Street, which serves “authentically inauthentic Jewish and Japanese food in South Williamsburg,” the restaurant says on its website, and has included such combos as matzo balls with ramen.)

World-renowned chef Enrique Olvera is nailing down a deal to bring his Mexican eatery Cosme, which has a location on East 21st Street, to 3,500 square feet at Industry City, sources previously told CO. And Burger Joint, which has a Manhattan outpost at Le Parker Meridien on West 56th Street, is also in serious negotiations for 1,000 square feet at the Sunset Park development.

Casual Italian hotspot Parm, named as one of the 101 best places to eat in North America by Newsweek, is in the process of building a new location in Williamsburg (to open in two or three months), at 162 North 4th Street, and one in Downtown Brooklyn (opening a couple of months after the Williamsburg one), at 202 Flatbush Avenue by the Barclays Center.

“We’re really, really excited to bring Parm to Brooklyn,” said Jeff Zalaznick of Major Food Group, which owns and operates Parm. Thus far, there are three full-size Parms in Manhattan and a counter at Yankee Stadium. Parm will also be opening a counter at Industry City, where it has manufacturing space.

Mr. Zalaznick said the company is focused exclusively on Brooklyn right now, and it has nothing to do with the rents.

“The next frontier for us is Brooklyn,” he said. “We think it’s an incredibly vibrant market. We think there’s a demand for our product there. It’s about the neighborhoods and our desire to bring Parm to Brooklyn to two very exciting, vibrant neighborhoods.”

With additional reporting by Terence Cullen.