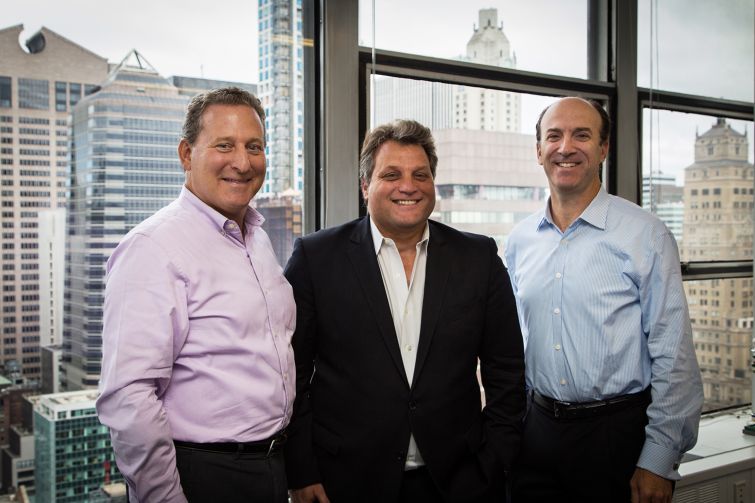 As they line up for a photo, Ken Horn shouts over to his colleague Joel Breitkopf and suggests both of them plant a kiss on the man between them, Brian Ray. The president and principal of Alchemy Properties, respectively, are all smiles and jokes with Mr. Ray, the founder of ABR Partners.

The three are in something of a honeymoon period. That’s because Alchemy is venturing beyond luxury condominium development to form a new partnership with ABR. Mr. Ray will be the lead on the new venture, Alchemy-ABR Investment Partners, while Messrs. Breitkopf and Horn will be hands-on as the new wing of the company branches out into acquisitions. New York City and South Florida will be the primary focuses, but the trio is also eyeing markets along the East Coast.

“We decided that we were in a position to move forward with a formal platform,” Mr. Breitkopf said. “So it evolved from looking at individual deals to having a platform—merging the platforms into a separate business, but related to the overall strategy of adding value. This is adding value, but with less risk, but yet the same hands-on approach that we take on the development side.”

Alchemy Properties will continue its development and condo conversions as a separate entity. (Alchemy is best known for the conversion of the Woolworth Building, which features a $110 million penthouse.) The new venture will be dedicated to acquiring multifamily, retail and office buildings. Construction isn’t the priority, but Mr. Ray said it’s something they aren’t necessarily afraid of venturing into.

Mr. Breitkopf said the company plans on buying up anywhere from 500,000 to 1 million square feet of property per year moving forward. The company will reposition the buildings and have a third party handle leasing and management of the properties. It’s not the ultimate goal to “slash-and-burn,” Mr. Breitkopf said, adding that the company plans to hold onto properties rather than turn them around for a quick profit.

‘I think my business was always leading to this type of venture. High-functioning, vertically integrated. I’ve had those types of partnerships, but this was kind of the next evolution of what we were looking to do with partners. There was no apprehension of doing it with them. It was such a good fit, the right time.’—Brian Ray

Which buildings those are haven’t exactly been carved out yet. The partnership only became official in May and is coming out to the world this week. But Mr. Ray said in the coming months that target markets would become more defined.

“We have a very broad set of parameters so far,” Mr. Ray said. “As we go, we’re refining what we want to look at. We’re just looking for really good strategic, opportunistic, value-add type things to take their real development expertise and bring that mindset to the acquisition side. It’s really just: their infrastructure is here and we’ve come in here and it’s just been great.”

And it’s been seamless, they said, trading compliments and jokes when they sat down with Commercial Observer last week. Mr. Ray has moved into Alchemy’s office on the top floor of 641 Lexington Avenue, along with an analyst and an intern. More employees are expected to come, Mr. Breitkopf said.

This was a relationship nearly a decade in the making. Mr. Ray had been working with the Alchemy team on a handful of potential deals. Messrs. Breitkopf and Ray said they found themselves talking shop at length about two years ago. (When they started dating, as Mr. Breitkopf refers to it.)

The big test on whether they could survive just about anything was a “very, very hairy deal” in South Florida last summer. The partners described the potential buy as a mess: a ground lease on two parcels, the terms weren’t co-terminus. To their relief, the deal to buy the property never materialized, but the partnership was born.

“I think my business was always leading to this type of venture,” Mr. Ray said. “High-functioning, vertically integrated. I’ve had those types of partnerships, but this was kind of the next evolution of what we were looking to do with partners. There was no apprehension of doing it with them. It was such a good fit, the right time.”

“Part of the process of having a successful partnership, we believe, is making sure everyone has a similar philosophy in terms of approaching transactions,” Mr. Breitkopf said. “It’s good to have differences of opinions and try to work through issues from a different perspective—Brian brings a great perspective to deals—but at the same time philosophically we’re on the same page on how we treat each other, how we treat outside relationships.”

Disagreements seem to be few so far, with an exception. On the eve of the U.S. Open finals, the partners have differing opinions on who has the men’s final locked down. Mr. Breitkopf believed Novak Djokovic had it locked down, while Messrs. Horn and Ray countered that it was all Roger Federer.