Now That Medical Marijuana Is Real, It Becomes a Real Estate Question 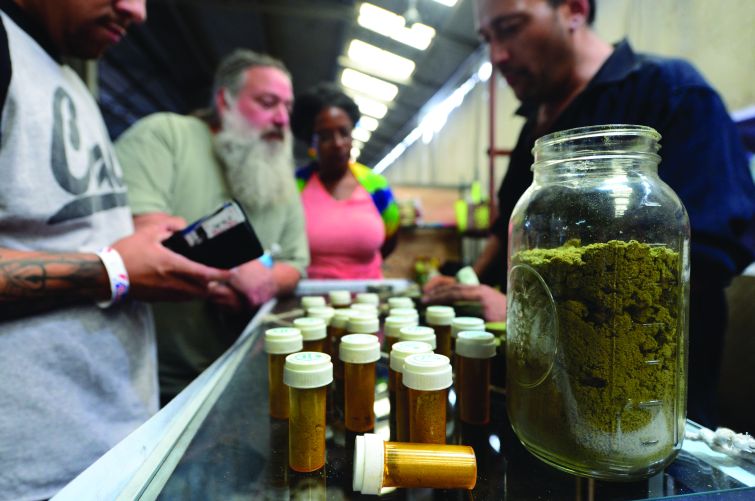 Five lucky companies were approved for a pot license last week—so medical marijuana is now a real thing in New York, with at least two dispensaries slated for Manhattan, two for Queens and one for the Bronx.

The winners had to meet very specific criteria set out by the New York State Department of Health, including paying a non-refundable $10,000 application fee and a registration fee in the amount of $200,000.

And while it is always a part of the story that’s confined to the background, the real estate of weed cultivation and distribution (the “where?” and “how much?” questions) will no doubt be a serious one in the coming months.

“New York may have a few opportunities, but prices for real estate that could be legally zoned for grows or dispensaries have increased in value, pushing up the market valuations of publicly traded marijuana real estate companies to unsustainably high levels,” said Scott Greiper, the creator of the Viridian Cannabis Stock Index and president of Viridian Capital Advisors, an investment banking firm in New York.

But moving into the pot business is not as easy as smoking a joint.

“There are a number of provisions that will make it difficult for pot entrepreneurs to profit, which includes having to hire union workers,” Mr. Greiper said.

Those provisions include employing a senior staff member with a minimum of one year of experience in good agricultural practices, a quality assurance officer who has experience and training in quality assurance and quality control procedures, and pharmacists working in dispensaries are required to complete the same four-hour education course as practitioners who have to register with the DOH in order to certify patients.

“The organizations that submitted an application understand that the restrictions are odious,” said Assemblyman Steve Katz who represents the 94th Assembly District, which includes parts of Westchester and Putnam Counties.

The five licensed pot dealers include Bloomfield Industries, Columbia Care NY, Empire State Health Solutions, Etain and PharmaCann LLC. And, for the moment, the winners expressed their satisfaction with the way the process played out.

“After 18 months of extreme effort, Etain is very proud to announce that we have been selected as one of the five organizations legally allowed to grow, process and dispense medical marijuana to the patients of New York State,” said a statement posted on the company’s Facebook page. “This is a huge victory for us, for women-owned and family-owned businesses and for New York State!”

Counties approved for a cultivation site include Queens, Monroe, Fulton, Orange and Warren.

“At the end of the day, the root of the entire cannabis market starts with growing the product,” said Michael Swartz, a senior analyst with Viridian Capital Advisors.

While Etain’s plan is to house its grow facility in Warren County and locate four dispensaries in Albany, Ulster, Westchester and Onondaga, Empire State Health Solutions plans to cultivate its grow out of the Tryon Technology Park and Incubator Center in Fulton County and dispense from Broome, Albany, Westchester and Queens.

“We are ready to start production immediately and are confident that we will meet the state’s deadline and be ready to serve patients in January,” said Dr. Kyle Kingsley, the chief executive officer of Empire State Health Solutions. “With our medical and scientific approach, in addition to our experience with medical cannabis in Minnesota, we have the expertise to produce medicine that doctors and patients can count on.”

Regardless of where they are located in New York, cultivation facilities are expected to be state of the art.

“In cultivation, we’re seeing a shift from the old world of growing in backyards and grow houses to the dawning of a new world of 200,000-square-foot outdoor greenhouses with advanced technology in lighting and water systems,” Mr. Swartz said.

But real estate considerations will no doubt come into play; in pioneering states where marijuana was first legalized, the real estate market in cannabis-related facilities has become overextended and overvalued—as made apparent during the first quarter of 2015 when the real estate sector of the Viridian Cannabis Stock Index was down 23.7 percent compared with last year when it was down 21.5 percent.

“The asset values became too expensive for many investors to make money, and most of these public companies came public in late 2013 into 2014, and as a result were faced with paying up for real estate investments,” Mr. Greiper said.

That hasn’t stopped marijuana CEOs in the recreationally legal state of Washington, for example, from expanding.

Salal Credit Union is the only financial institution nationwide that lends money to licensed marijuana companies. With $400 million in assets, the credit union has completed up to $7 million in loans since the state of Washington legalized marijuana. “We will complete another three loans for under $1 million for commercial properties,” said Bob Schweigert, the chief lending officer with Salal. “For the remainder of 2015, that’s what we have in the pipeline right now.”

Earlier this year, Salal granted a loan for $2.5 million to an investor who is leasing kitchens to legal marijuana processors to produce edibles. Other loans, amounting to $3.5 million, financed four different buildings slated to grow marijuana plants, and another producer/processor was granted a loan to purchase an extraction and labeling machine so that the company could convert cannabis to oil. “One of the uses for oil is for edibles,” said Mr. Schweigert.

New York’s program, however, bans marijuana edibles and allows only for oil extracts that may be vaporized, swallowed in a capsule or absorbed in the mouth. Not even smoking the raw cannabis flower is allowed.

Although local residents could benefit from the creation of jobs that dispensaries will create in the state, union workers will be given priority. When the Compassionate Care Act was passed last year, it included language that cannabis workers be granted the opportunity to become part of a union.

“The state has a proprietary interest to make sure that jobs created in this industry provide quality medicine to the patients, but it is also a jobs bill that ensures jobs created in the industry are full-time, middle-class work that will prosper the workers as well as the industry,” said Joseph Fontano, the assistant to the president of Local 338 in Mineola, N.Y.

That means the five winners of a cannabis license in New York face the added cost of union wages and benefits in addition to the application and registration fees.

According to the Bureau of Labor statistics, the median weekly wage of nonunion workers is $763 compared to the $970 weekly for workers who were union members.

So far, New York is the only state that has involved a union in its process of offering legal marijuana. California was the first state to establish a medical marijuana program in 1996.

Attorney Mara Felsen said she was stunned by the requirement. “I think it’s incredible that there’s a concession like that,” said Ms. Felsen, who helps clients with marijuana-related legal issues in California. “I’m not sure how I feel about such a strong-arm tactic. It’s a fascinating twist and may have been the concession that needed to be thrown to the union to gain their significant weight to get this bill passed.”

Even recruiting and temp agencies need to be designated in advance and written into labor peace agreements that are negotiated with cannabis business owners.

“Once medical marijuana is up and running, we will recruit through the unions for those jobs to satisfy that need,” said Stephen Sullivan, the president of Ms. Mary Staffing, a marijuana facility staffing agency. “It’s an extra step for us to take but it’s not a major obstacle.”

New York is among the 23 states and Washington, D.C. that has enacted laws to legalize medical marijuana. The state’s program is expected to be fully operational by January 2016, but the law only allows for five licensees who are permitted to launch one grow to supply four dispensary sites each, creating a total of just 20 dispensaries to serve the entire state of 20 million people.

The exact number that will be medically empowered to access and purchase marijuana is currently unknown as the state has not yet opened patient registration. According to its website, the DOH will issue a Registry Identification Card to certified patients with medical conditions such as cancer, HIV/AIDS, Lou Gehrig’s disease (ALS), Parkinson’s disease and multiple sclerosis.

The $200,000 registration fee will be refunded to remaining applicants who were not issued a license.

“We’re all disappointed, but when you have 43 companies applying for five permits, there’s going to be disappointment,” said Thoma Kikis, chief marketing officer for KannaLife Sciences, a bio-pharmaceutical and phytomedical company that was among those rejected. “You just have to move on.”

KannaLife Sciences’ application was just shy of 1,000 pages and the company had signed a provisional lease at a location in Downtown Brooklyn near Barclays Center.

“Every agreement we signed was contingent on a license,” Mr. Kikis said. “We are informing everyone that we didn’t get a license.”

Citiva Medical is another applicant that was denied a license.

“All of the applicants met the criteria of a license so how did the Health Department decide? How is one applicant better than the other?” Mr. Katz said. “There should have been a lottery.”

Citiva Medical’s corporate entity is based in Staten Island, and like KannaLife Sciences, the marijuana company had plans to locate its cultivation facility in upstate New York.

“We weren’t lucky enough to be selected but we will be available to any of the licensees if they would like to discuss scientific methods,” said Mr. Kikis. “We’re going to continue doing what we’re doing, which is our primary focus on the pharmaceutical science of cannabis.”

Establishing a dispensary or grow was not only steeped in politics but also space and zoning restrictions. That may be why only two dispensaries will be operated in Manhattan.

“Manhattan is challenging because grows and dispensaries cannot be located 1,000 feet from a school, daycare, church or playground,” said Mr. Greiper.