Downtown Brooklyn Vacancy Staggers, But Building on the Horizon 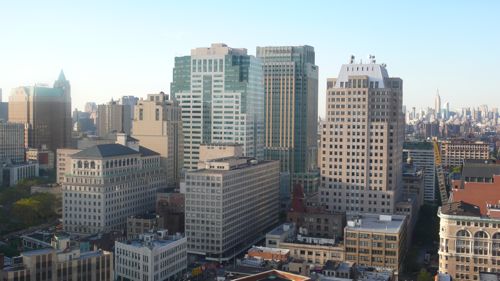 Vacancy rates for the first half of 2015 hovered around a lowly 3.4 percent of the 17 million square feet of commercial space in the area, according to a market report by the Downtown Brooklyn Partnership released this morning. While some are fretting that there isn’t enough space for new tenants, new commercial developments are slated to be built in the coming years including a major development above the Downtown Brooklyn Macy’s.

“As the Downtown Brooklyn renaissance continues on all fronts, our commercial vacancy rate is at an all-time low, and there’s a critical need for office space to meet growing demand,” said Tucker Reed, the president of the Downtown Brooklyn Partnership, in prepared remarks. “It’s essential that we focus on all the elements—commercial, residential, retail and cultural—needed to make Downtown Brooklyn a thriving central business district.”

While interest remains high for the bustling area, few office products have come online in recent years. That could start to change after Tishman Speyer announced last week that it would build 10 floors of commercial space above the Macy’s at 422 Fulton Street, although the developer has not given a projected square footage. Quinlan Development and Building & Land Technology plan on turning 41 Flatbush Avenue between Fulton Street and Lafayette Avenue into 230,000 square feet of commercial space. The development is the first commercial project in 10 years, according to the Downtown Brooklyn Partnership.

In total, the report shows, there was 336,000 square feet of commercial space under construction in Downtown Brooklyn during the second quarter of 2015. That’s a massive improvement from a quarter earlier when there’s was a paltry 26,000 square feet under development.

For Brooklyn real estate pros, new office space in the sought-after neighborhood has been well overdue.

“There is far more demand than supply,” said Timothy King, the managing partner and co-founder of Brooklyn-based CPEX Real Estate. He added that the Tishman Speyer choice to develop in Brooklyn could convince other Manhattan companies to do the same and build commercial in the neighborhood.

That recent dip was weighed down by the 80,000-square-foot lease for former Secretary of State Hillary Clinton’s presidential campaign office at 1 Pierrepont Plaza, which signed at the building in April. The report notes there were just two other big leases signed during the first half of 2015, including childcare non-profit Graham Windham, which also signed on at 1 Pierrepont Plaza for 14,000 square feet, and architect firm JFrankl & Associates which signed a 4,253-square-foot deal at 16 Court Street.

For brokers on the ground in the area like Robert Hebron, a principal of Ingram & Hebron, it’s been difficult to find even small spaces. He currently has a client seeking a 1,000-square-foot office in the area—but several options for that number of square feet would have been split on several floors. It’s even been difficult to find offices for tenants look for something in the 3,000- to 5,000-square-foot range.

“There are tenants in the market that we can’t find office space for,” Mr. Hebron said. “That’s not to say there is none. [But] compared to three to five years ago, there’s no supply.”