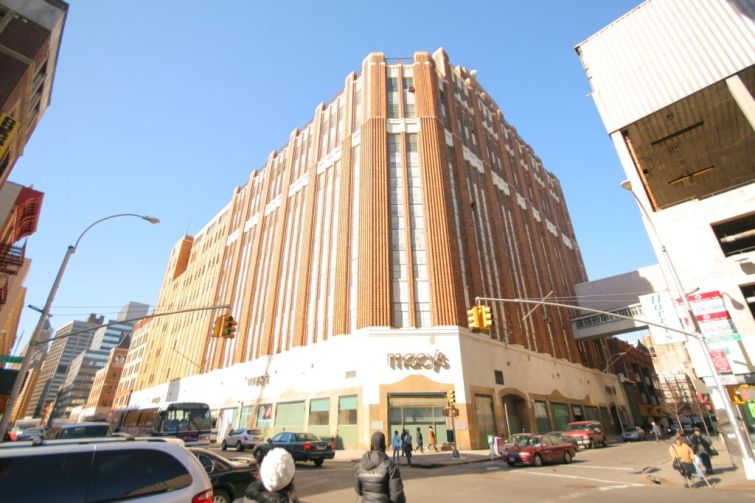 The Brooklyn real estate community breathed a sigh of relief yesterday morning when Macy’s announced it had sold off part of its building in the downtown section of the borough.

Tishman Speyer agreed to buy the upper portion of the aged 422 Fulton Street, whose main entrance is at the corner of Hoyt Street, for $170 million, and delve out another $100 million to Macy’s over the next three years to renovate its retail space. Macy’s will stay open during the renovation, which will start next year, and the department store wants the finished product to keep with the modern look of Downtown Brooklyn.

“It’s is a boon for a market that is already booming,” said Timothy King, the managing partner of CPEX Real Estate, which is based on nearby Willoughby Street. “It’s going to have a very salubrious effect on both the Fulton Mall and the Livingston [Street] corridor.” The building reaches back to Livingston Street.

Brooklynites told Commercial Observer this is a three-fold victory: a decrepit Macy’s is going to get a full-blown renovation; Downtown Brooklyn is about to see new office space; and Tishman Speyer is coming to Brooklyn.

“I think I’m going to stand at the Brooklyn Bridge with a big sign that says ‘Welcome [Tishman Speyer Co-Chief Executive Officer] Rob Speyer and team,’” said Carlo Scissura, the president of the Brooklyn Chamber of Commerce. “This is as win-win as it could possibly be.”

Macy’s announced two years ago it was putting part of the building up for sale. The store has mostly fallen into disrepair, even as other retailers popped up along both Fulton Street and the Livingston Street corridor, borough mavens told CO. Rumors circulated about the building’s fate, with business professionals growing frustrated over the lack of movement on a sale.

“Certainly on Livingston Street, it’s been a major problem that there are no windows,” said Tucker Reed, the president of the Downtown Brooklyn Partnership. “The store has been in a subpar condition for quite a while. It’s great to see Macy’s taking strides to get up to Brooklyn standards.”

Indeed, Macy’s is trying to keep up with the development-happy neighborhood. It’s going to lift some ceilings, replace the ground-floor window space and bring in more light to the upper floors.

Tishman Speyer, which has developed in Queens but never before in Brooklyn, is planning to turn its five-floor portion (Macy’s is keeping the basement up through the fourth floor) into 10 floors of top-notch commercial space, and said it could be turned into a company’s headquarters. Office space in Downtown Brooklyn has been scare, Brooklyn real estate pros said, with the prime tenancy catering to the various courthouses (think law firms, clerks and bail bondsmen) or government offices. New Class A office space, they added, was going to be its own boost for the area as it transforms from a business district to a full-on neighborhood.

“This is flagship office potential we haven’t had for a long time,” Mr. Scissura said. “Ten years from now, when companies are ready to be in Brooklyn, we don’t have space for them” without the new commercial product.

It’s not the only project the owner of the Chrysler Building and Rockefeller Center might have in the borough. The Macy’s deal also includes Tishman Speyer acquiring the department store’s parking facility on Hoyt Street—highlighting in its announcement that the site has the potential for a mixed-use development.

These Brooklyn watchdogs were quick to say that Tishman Speyer’s move across the East River is big for them and big for the borough. It’s just the latest big-name Manhattan developer embracing Kings County. Spitzer Enterprises, for example, is building a residential project along the waterfront in Williamsburg.

“As the Manhattan marketplace continues its rocket-like growth, developers of all sizes and pedigrees are looking for fertile field for opportunities and many of them are finding fertile ground in Brooklyn,” Mr. King said.