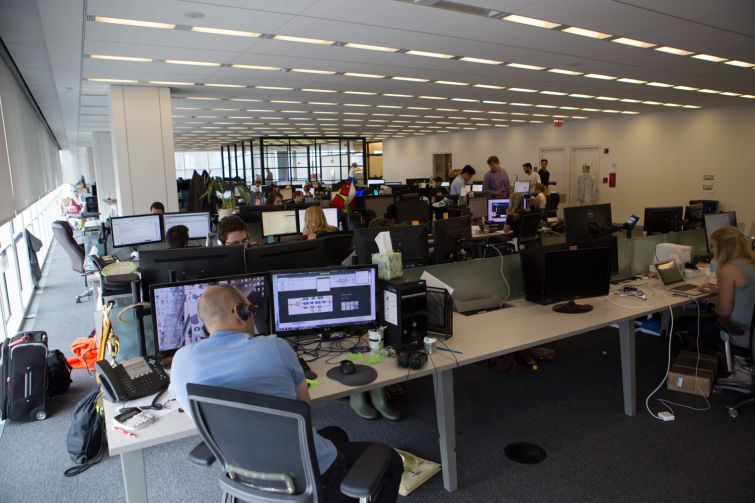 Internet analytics company Bounce Exchange, founded in 2012 by Ryan Urban, has bounced around and exchanged spaces quite a bit since its birth. The company began at an incubator at 137 Varick Street, a stone’s throw from the Holland Tunnel, where its first three employees initially set up shop. As the company experienced the early stages of its rapid expansion, the incubator no longer met its needs.

“We were the loudest people by far. They kept moving us,” Mr. Urban said in an interview with Commercial Observer.

Once that space situation was no longer tenable, Bounce Exchange moved in late 2013 into a 5,543-square-foot office at 304 Hudson Street (“our first real space,” Mr. Urban said).

“We were really happy,” said Mr. Urban of the company in its prewar Soho office building. Couches and Ping-Pong tables were brought in to enhance the office’s work-life balance.

However, once again growth forced Bounce Exchange to reassess its space; within nine months, the Ping-Pong tables and couches were removed to make room for more employees, sitting two people to each desk. Others were working from home to conserve space.

“The plan was that if we grew the way we thought we were going to grow, [the office] would last full five years. Then after that we would figure it out,” said Mr. Urban. “The place didn’t even last a year.”

Mr. Urban then embarked on an office-leasing tour of New York City, viewing more than 70 different spaces for his 65 employees. When none of those options were viable, he expanded the search to above 33rd Street, previously his northernmost boundary.

All told, Bounce Exchange looked at more than 90 spaces before landing a 31,000-square-foot spread on the 21st floor of The New York Times Building, which it moved into this past February. The space in the iconic, Renzo Piano-designed building features floor-to-ceiling windows that wrap around the space.

“You get an immaculate view of the Hudson River,” said Mr. Urban. “There’s no street noise at all…and you can look right up and down Eighth Avenue.” Automatic blinds regulate the light in the space depending on the location of the sun. Not one person in the company has an office in the open floor plan.

“I stuck my neck out on that one,” said Mr. Urban. “Everyone liked Soho. I had to do some convincing on why this would be great for us. [But] now, everyone is ecstatic.”

The kitchen has a “snack island” and a refrigerator stocked with different waters, wines, beers and bottles of champagne and “every kind of energy drink imaginable.”

“That was the biggest commercial drink fridge we can get,” said Mr. Urban.

There are also electric scooters that people use to ride around the office and nap rooms for those who need a break in the middle of the workday. And the company has invested in a $6,000 full-body massage chair.

“It’s like the one from Brookstone, but better,” said Mr. Urban. “It gets used all the time.”

There’s expected to be an influx of new employees to enjoy Bounce Exchange’s new space.

“Right now, we’re one of the fastest-growing private software companies in the country, and we have 33 openings right now,” said Mr. Urban. “We’re looking for the best talent in New York.”