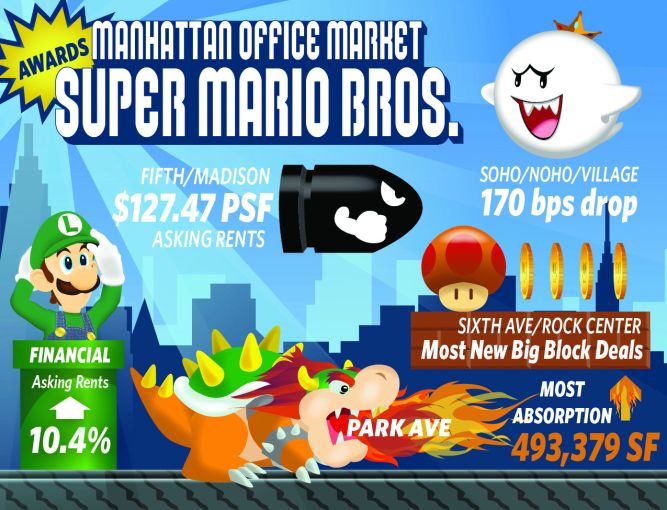 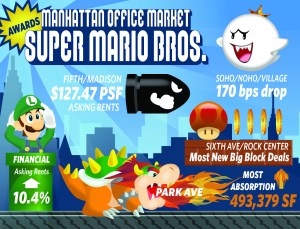 Last week I got an email about the 30th anniversary of Super Mario Bros., and my initial reaction was, “Damn—I was 10 years old when I first played that game on my original Nintendo, and I still play it to this day with my two sons!”

How can I celebrate this momentous occasion in Stat of the Week? The simple answer is this: the first-ever Manhattan Office Market Midyear Super Mario Bros. Awards. There’s no better way to give out awards for real estate submarkets than by basing them on Super Mario Bros. characters and power-ups.

5. The Bullet Bill Award. This bullet-shaped bad guy quickly flies across the screen hoping to knock Mario and Luigi off their jumps—and this leads us to the submarket with average Class A asking rents that is quickly breaking records! Fifth/Madison asking rents have reached $127.47 per square foot in June and are up 2.5 percent this year. This average is also the highest ever achieved for the most expensive submarket in the nation, surpassing the previous high by 11.9 percent.

4. The King Boo Award. King Boo, Luigi’s main antagonist, had his best video game appearance in Luigi’s Mansion (but only a true gamer knows that one). This award goes to the Soho/Noho/Village submarket which surprises everyone with the biggest drop in availability so far this year, a 170-basis-point decline to the market’s lowest rate of 3.4 percent.

3. The Luigi Award. Mario’s slightly younger and taller brother has always been known for his ability to jump high. This award goes to the Financial District submarket with the highest increase in Class A asking rents this year, up 10.4 percent to $53.45 per square foot.

2. The Mushroom Power-Up Award. A tiny Mario becomes a bigger Mario when he eats a mushroom power-up. This award goes to the Sixth Avenue/Rock Center submarket for hosting the most new big deals greater than 100,000 square feet, totaling four so far in 2015.

1. The Bowser Award. This baddy breathes fireballs and captures the Princess in almost every version of the game. This award goes to the Park Avenue submarket for being on fire and having the most positive absorption year-to-date with 493,379 square feet. This submarket is the only one in Manhattan this year to post positive absorption all six months.

Richard Perischetti is vice president of research & marketing at DTZ.