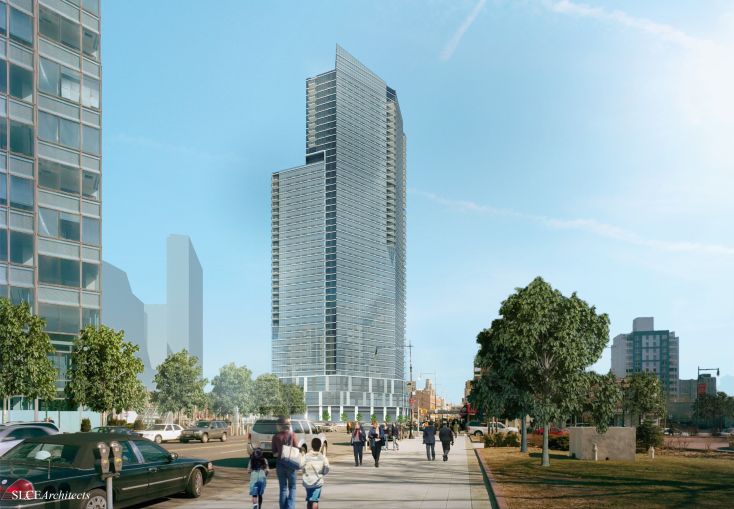 The developer negotiated the financing directly with Wells Fargo, TD Bank and Capital One. Wells Fargo served as the leading lender in the transaction to fund roughly half of the $543 million project, Mr. Elghanayan said.

Under the state’s 421-a tax incentive program, 195 apartments will be set aside as affordable units for a 30-year period for renters earning up to 60 percent of the area median income. The remainder of apartments will be rent-stabilized market-rate units.

The residential towers under construction mark the largest 80/20 project in New York outside of Manhattan, according to the developer.

“Historically, the 80/20 program only really worked in Manhattan, where the rents have been high enough to carry the affordable units,” Mr. Elghanayan said. “But now the rents have risen in the outer boroughs to the point where an 80/20 starts to make sense.”

The apartment complex is due for completion in 2017. Construction on the project is currently up to the 10th floor of the low-rise tower. The complex’s amenities will include a health club, yoga room and yoga deck, three other roof decks, multiple lounges and a pet-washing station.

Rockrose has invested in the Court Square district of LIC for more than two decades. Last August, the development firm fully leased up its 709-unit luxury residential tower Linc LIC, which sits across the street from 43-25 Hunter Street.

The company is in the process of redeveloping the nearby Eagle Lofts complex at 43-22 Queens Street. Rockrose will renovate an existing building there and build a tower around it to create 780 rental loft apartments. The firm is currently deciding whether or not that property will contain an affordable component, Mr. Elghanayan said.

In total, the developer plans to build 2,500 rental units in Court Square and is seeking restaurateurs and independent retailers to create a new shopping destination on Jackson Avenue.

“We’re fortunate that Long Island City has become such a desirable place to live that market-rate rents can support the creation of affordable units,” Mr. Elghanayan said.