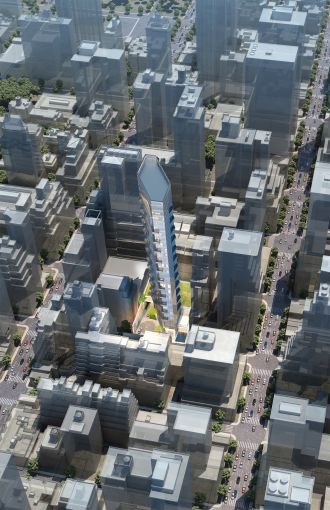 Bank of China provided a 10-year, $254 million construction-to-permanent loan facility for the Midtown East multifamily development, which extends a full block between Second and Third Avenues, according to the brokers and sponsor.

The site will house a 43-story apartment tower with a multilevel parking garage and ground-floor retail space once the building is completed in 2017. The property, which is being financed under the 80/20 Housing Program, will contain 342 residential units at market-rate rent and 87 affordable units for households earning 60 percent of the New York City area median income or under.

The 441,000-square-foot tower will feature various amenities, including concierge and valet services, an indoor swimming pool, and other common areas.

Bank of China was able to provide BLDG with a fully underwritten term, which differs from the typical structure of loans under the 80/20 Housing Program, Greystone Bassuk Executive Vice President Drew Fletcher told CO. Mr. Fletcher worked on the transaction with Director Matthew Klauer and Vice President Evelyn Savino.

The facility, which closed in June, is structured as a four-year deal with a six-year extension option on a nonrecourse basis, according to the brokers.

“Typically banks are providing a construction loan that will cover a two- to three-year period and here we were able to structure a facility that includes construction and a permanent loan all packaged as one,” Mr. Fletcher said.

“The transaction was marketed very aggressively, and we probably went out to 40 different institutions to place debt. With a transaction of this size, it’s almost always going to require a syndicate,” he added. “Most banks are not willing to underwrite and hold a loan facility of $250 million on balance sheet. Through that process we identified Bank of China.”

The facility also features an earn-out feature that allows the sponsor to resize the loan and recoup some of their initial equity once the project stabilizes.

“For this particular owner the loan was ideal because as a multigenerational family firm, they plan on holding the asset,” Mr. Fletcher said. “They have a very long-term horizon and were concerned about where the capital markets might be in three or four years and what the interest rate environment might look like.”

Lloyd Goldman, the nephew of real estate developer Sol Goldman, founded BLDG, the private, multi-generational family real estate investment and development firm. Lloyd Goldman was among a group of investors who purchased the Willis Tower, then the Sears Tower, in Chicago for $840 million in 2004.

“As our first ‘80/20’ project, we knew there would be a learning curve, so it was critical for us to assemble the right team to guide us through the process,” Mr. Goldman said in prepared remarks provided to CO. “Greystone Bassuk provided complete end-to-end coordination and management of the entire HFA bond financing process from inducement to closing.”

A representative for Bank of China declined to comment.