CPEX’s Tim King Is the Maven on All Things Brooklyn 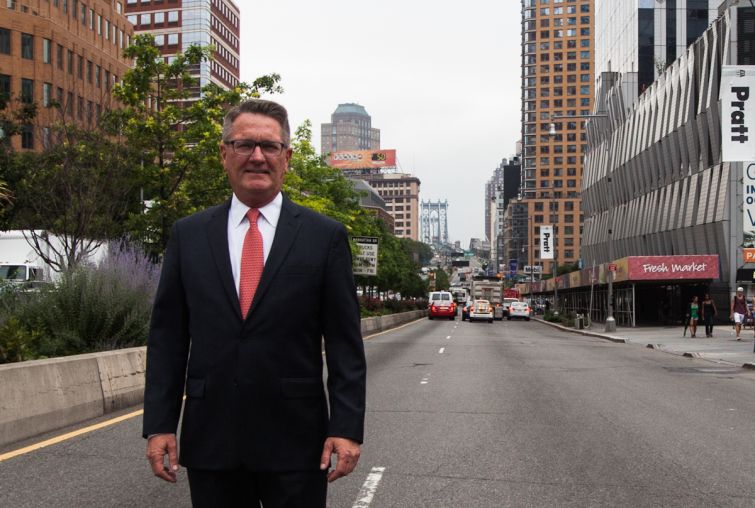 On the second floor of CPEX Real Estate’s offices on Willoughby Street in Downtown Brooklyn, Timothy King pops open a door. Inside, the brokerage’s newest hires eagerly bob their heads up as the industry veteran keeps talking.

Mr. King, the managing partner of CPEX, closes the door. “My future is in the hands of these people,” he said.

What a terrifying thought, he quipped.

Mr. King’s dry sense of humor has something of a Brooklyn edge to it. (It’s the same old-school I-don’t-give-a-damn-attitude that could also be detected when he went out for a cigarette and said he started smoking four years ago at age 60, which he loosely attributed to his Romanian chain-smoking girlfriend.)

But when it comes to business, there’s more excitement than flat-out humor. Walking through the neighborhood after the sit-down interview with Commercial Observer, Mr. King points out all the development going on down Willoughby Street. There’s the Brooklyner at 111 Lawrence Street, once the tallest building in Brooklyn, 100 Willoughby Street is going to take its place, and there’s the project that will eclipse both of them. A few blocks down is City Point, which Acadia Realty Trust and Washington Square Partners are developing and Mr. King called a major impact on the borough. Across the street from City Point is 420-428 Albee Square, currently a vacant site where he represented the seller in the $38.5 million deal.

He’ll keep telling you about Industry City, the innovation and manufacturing district, and the neighborhood Sunset Park, which both seem to be on his mind a lot lately. CPEX represented the landlord of Liberty View Industrial Plaza, right next door to Industry City, in about a 100,000-square-foot lease to bring Bed, Bath & Beyond and other retailers to the area. As CO reported earlier this year, Saks Off Fifth is considering taking 30,000 square feet at Liberty View (Mr. King declined to comment on that). Not to mention the 60,000 square feet of space he and CPEX are marketing at the Kingswood Center in the Midwood Section of Brooklyn.

While other projects such as the Brooklyn Navy Yard along with residential development in Downtown Brooklyn are the biggest things since the Brooklyn Bridge, Mr. King will tell you the real story is Industry City. It was fitting that during the course of Mr. King’s sit-down with CO, Time Inc. announced it would move more than 300 employees in its technology and innovation departments to 55,000 square feet at the sprawling Industry City complex.

Mr. King said Time’s move will be a game-changer for the 6-million-square-foot property.

“That’s a story. That’s not like they’re moving their bookkeeping department there,” he said. “Think about the intellectual capital that’s going to be in that bunch of people. Someone who owns a building on 3rd Avenue that they bought 10 years ago has probably seen overnight a very, very significant increase in value based on what other people do with their buildings.”

Mr. King took the bull by the horns at the start of our one-on-one asking us, “Do you know how we operate?”

Commercial Observer: Why don’t you fill us in?

Mr. King: In a traditional commercial real estate office, to a large extent, every agent is kind of like a jack-of-all-trades. In the morning they’ll meet a guy selling a gas station, and in the afternoon a guy selling an elevator apartment house.
To me those are really different skill sets, different customer bases and different data points to drive how somebody effectively values and markets a property in a distinct asset class.
Our business model revolves around the concept of each asset class. Retail leasing: those guys only rent stores. Retail sales: all they do is sell K-class or taxpayer-style properties. Office leasing: that’s all they do. Industrial sites: that’s all they do. Focus is really critical. The sun shines on this table equally. But if I take off my glasses, I can focus those sunrays and the same sunrays are now going to set that table on fire because of the focus. And that focus is what lets our teams be super-successful. It’s hard for a classic or a traditional agent to grasp that or to deal with it. So we kind of grow our own.
I sometimes compare it to a hospital. If you drive by a hospital there are dozens of doctors in there. But on a day when you walk in with a hatchet sticking out of your head, you don’t want to hear that the world’s best cardiologist is on duty in the ER. You want the neurosurgeon. Just like all doctors are not the same, all agents are not the same.

What do you think of the Navy Yard? WeWork is going to develop there. Wegmans is coming in.

Wegmans is an interesting choice. So Wegmans is part of the Admiral’s Row request for proposals four years ago. That will be a game-changer for that neighborhood.

‘I always call [Sunset Park] the pimple waiting to get squeezed because it’s in between Bay Ridge on one end and Park Slope on the other.’—Tim King

What was the Navy Yard like when you were a kid?

I don’t know [if] as a kid you thought about this stuff. But let’s say when I got my driver’s license and would poke around different parts of the world, that was like a place you never went to. It’s really like the ultimate destination-style operation now. But the same story is playing out now at Industry City, where Andrew Kimball went with Jamestown. We were involved with another manufacturing building adjacent to Industry City last year where we signed the largest lease, retail lease in Brooklyn. It was Bed Bath & Beyond, buybuy BABY, Cost Plus World Market and Harmon Face Values. They’re going to take 120,000 square feet in a former industrial building immediately adjacent to Industry City.
It’s a desolate strip of literally pawn shops and porn shops, with peep shows, muffler guys. It’s really not where you want to stop at 2 in the morning. But that’s going to change between what Jamestown does at Industry City and what’s happening at the building that’s called Liberty View Plaza where Bed Bath is coming in.
That’s just a small part of it. That’s a 1.2-million-square-foot building where about 160,000 or 170,000 square feet will be retail and the rest will be light manufacturing, creative. The city put a fashion innovation center on a floor of the building trying to attract businesses out of the Fashion District in Manhattan and provide almost a WeWork-style operation where on one floor you could have dozens of small fashion-related businesses.
Part of what we’re looking to do is get Bed Bath, for example, to carry some of the products that are being made in the building.

It seems like nobody lives around Industry City. You think that’s going to change?

But is there the housing stock there?

The Sunset Park residential marketplace is already very well-established. I always call it the pimple waiting to get squeezed because it’s in between Bay Ridge on one end and Park Slope on the other. It is going to benefit from the influx of jobs and activities.

What’s happened in Downtown Brooklyn from your point of view?

We went from having the tallest building lose its title to another that lost it to another that’s going to lose it to another. If you go back just a few years ago, people came here for one of a few reasons. People came here to work, or people came to visit whether it was the Department of Motor Vehicles or what have you. Nights and weekends it was a deserted area.
Now with the influx of all these residential towers there are going to be 5,000 to 7,000 families living within five blocks of this office—none of whom lived here say five years ago. Think about what that change does to the retail environment. All those people need a place to shop, to buy everything from groceries to beer. They need all the stuff that people need to run their lives.

You think with Former U.S. Secretary of State and Senator Hillary Clinton’s Brooklyn Heights presidential campaign office in the neighborhood, rents will go up?

A campaign office is a short-lived phenomenon. The rents are being raised for different reasons, not because of Hillary.

Is there low office stock here now because it’s being filled?

The opposite. We’ve lost office buildings that have been converted to residential or torn down for something else. The market here is very, very tight. JEMB Realty is doing a 400,000-square-foot office building, which might be the first new office building built down here since the MetroTech-era.

So it’ll balance itself out.

Yes and no. Real estate is like the ultimate supply and demand business. When demand is strong and supply is limited, prices go up.
In my opinion, the demand for space of all types in Brooklyn—and I’m talking from office to retail to industrial through residential—is at a semi-all-time high. But God made just so much dirt, so the supply is relatively limited. That’s why people are getting more and more creative to try and find ways to meet the demand side of the equation.

What do you think is going to be the next hot neighborhood in Brooklyn?

I suspect you don’t need to be the reincarnation of Harry Helmsley to know that Sunset Park is going to see a big impact, a big increase in value and desirability. I think an area like East New York, where the mayor is discussing a major rezoning initiative and bringing lots of more people. For better or worse, that’s the sort of neighborhood where today prices have not reached the sort of nose-bleed levels that the other more appealing areas have. There’s probably a great deal of opportunity.
If I had to make a sweeping statement regarding the changes in Brooklyn during my career, it is that in this point in time, there’s not a single neighborhood that’s not desirable in some shape or form. There are probably lots of areas that still have a lot of growth left in them—a lot of opportunity for people who can see what today looks like a lump of coal, but know that if they polish it long enough they’re going to find a diamond in there.

What do Brooklynites need, if anything anymore?

What Brooklyn needs, besides getting the Dodgers back, is better lifestyle stuff that ranges from better food and better entertainment to more opportunities for green space and for shopping.
Let’s go back to Wegmans for a minute. I live in suburban Jersey. Within a 10-minute ride of my house I can go to a Whole Foods, Stop & Shop, Shop Rite. Brooklyn doesn’t have that.
We’re severely under-retailed in almost every category [in Brooklyn], but particularly in the supermarket arena. If you were to live in almost any other part of the world, you’ve got a 7-Eleven down the street. It’s interesting that considering the density of [Brooklyn’s] population and the disposable income, how few outlets there are for people to take advantage of their affluence or ability to buy.

You are from Brooklyn, right?

I grew up in Brooklyn. I’ve worked almost my entire career in Brooklyn. I currently live in New Jersey [he declined to say why]. I tell people I sleep in Jersey, but my heart’s in Brooklyn.

Where in Brooklyn did you grow up?

Canarsie, which at that time was a vast wasteland.

Did you ever think Brooklyn would ever see this much development?

Are you still a Dodgers fan?

No. The Dodgers left when I was a kid. That’s an enduring myth that they’re going to come back.

Where could they go now with the scarcity of land? They would have to be very creative.