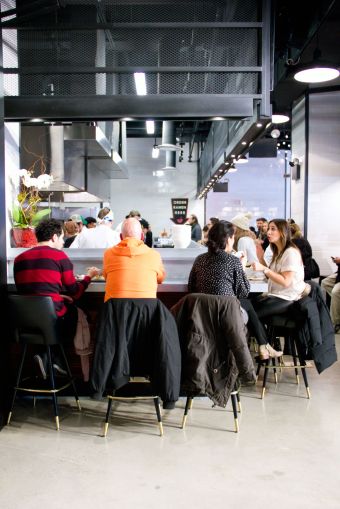 Gone are the food courts of suburbia with Sbarro and Wendy’s. In their place are the urbanized spots that offer fare such as Blue Bottle Coffee and Amy’s Bread.

That was the message at CBRE’s quarterly market report this morning, with a panel of brokers touting the impact of such places as the Gotham West Market at 600 11th Avenue, Eataly at 200 Fifth Avenue along with Le District and Hudson Eats at Brookfield Place.

In total there are 12 food halls either operating, in the works or rumored to be opening, according to a CBRE report. Those range from the established such as Chelsea Market to the higher end like The Plaza Food Hall in the Plaza Hotel. Food celebrity Anthony Bourdain is in talks for a massive 100,000-square-foot site at RXR Realty and YoungWoo Associates’ Pier 57 in the Meatpacking District, as Commercial Observer reported in May. Danny Meyer, the founder of such restaurants as Shake Shack, is eyeing a 40,000-square-foot concept in the base of the Related Companies’ 10 Hudson Yards.

While the open eating areas aren’t necessarily located at the base of commercial buildings (Gotham West is under a residential structure), the panelists said food halls have become an amenity for offices in a neighborhood. The perk, some said, was a slew of authentic food options and a shared eating environment as opposed to co-workers bickering over different appetites.

“It gives you this great opportunity of being able to sample all different types of food and all sit together in a creative, cool, hip environment,” said panelist Amira Yunis of CBRE, who represented UrbanSpace in its lease at 230 Park Avenue. “I think that it’s going to end the occasional debate of where you’re going to eat lunch today. We can all go in a group together. I often find you spend as much time trying to figure out what type of food you would like to eat than sitting in a restaurant eating.”

Impacts have been substantial to areas around food halls such as Eataly, which sits between West 23rd and West 24th Streets and Fifth Avenue. Taking rents have increased by 200 percent in the Madison Square Park area since Eataly opened in 2010, according to the report, and has drawn the likes of Lego, which signed a lease for 7,700 square feet in 2012.

“It created a whole new traffic pattern, which is what happens in retail. When you have a dynamic traffic pattern change, you literally can change the entire market,” said panelist CBRE��s David LaPierre, who represented Eataly in its deal. “The rest of the market around us dramatically grew and increased in terms of people wanting to be there, feeling they could confidently be there and perform.”

Part of that traffic change has also been due to a city effort to install pedestrian plazas particularly in front of the Flatiron Building, which changed the streetscape in the Midtown South neighborhood, as CO reported in June.

Several of the food courts have trended toward the Hudson River, following the swaths of office and residential development running from West 42nd Street all the way down to the Meatpacking District. The panelists dismissed concerns that there might be too many on the Far West Side. Instead, they said, retailers often will cluster together, and food halls were following development and office shifts to the area.

“Most want to be around each other,” Mr. LaPierre said. “I think just like retail, people like to cluster. If you go down to these…they’re packed. It isn’t like one has nobody [inside].”