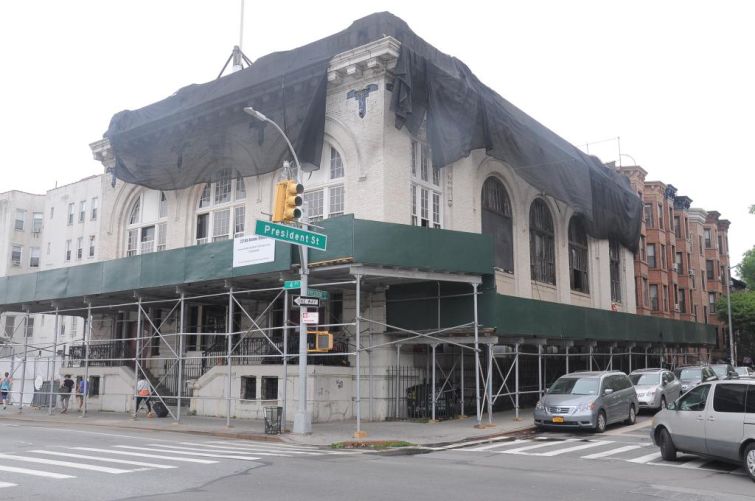 Blink Fitness has inked a deal for the entire 16,700 square feet of the Brooklyn Lyceum, according to the developer renovating the building.

The discount subsidiary of Equinox signed a 15-year lease for the landmarked property with Greystone, which is redeveloping the former public bathhouse at 227 4th Avenue in Park Slope. It marks the fourth Brooklyn location and one of about 10 citywide that Blink is slated to open within the next year and a half.

“It’s a neighborhood we wanted to be in,” Ezra Saff of Retail Zone, who represented Blink in this deal along with a slew of others throughout the city, told Commercial Observer. “They’re aggressive. They want to conquer the boroughs.”

Asking rents were not immediately available. Brandon Berger, Alex Beard and Eddie Mamiye of RKF represented the landlord in the deal. An RKF spokeswoman did not immediately return a request for comment.

Greystone bought the property at a foreclosure auction in January for $7.6 million, according to The Wall Street Journal, which first reported news of the blink deal. The company is committing up to $2 million to restore the 12-story building, after opting not to convert it into residences. Instead, the Journal reported, it transferred 23,000 square feet of air rights over the Brooklyn Lyceum to its residential development next door at 225 4th Avenue.

“Once we changed gears from our initial residential development plan to single-use commercial for the Lyceum, we knew a tenant such as Blink would be ideal for both the interior space and as an added amenity to the neighborhood as a whole,” said Jeffrey Simpson, the head of Greystone Property Development, in prepared remarks. “By restoring and maintaining the exterior beauty of the iconic Lyceum, Park Slope residents can enjoy both the aesthetics of the building and the functional use of the space inside.”

Blink seems to be taking over the city. With spaces ranging from 14,500 to 16,500 square feet, the fitness club has locations slated to open in the Canarsie, Coney Island and Bedford-Stuyvesant sections of Brooklyn; the Riverdale, Tremont and Williamsbridge neighborhoods of the Bronx; in Washington Heights, the Grand Central Terminal district and on East 54th Street in Manhattan; and Ozone Park in Queens.

Bill Miller, the head of real estate for Blink, said the fitness company is focused on finding locations in the city that have density, whether it be close to people’s homes or their employment. Some of the sites Blink has been focused on are tight-knit communities where people might otherwise not join a gym because of price reasons or training style, as well as locations with good mass transportation.

“We want to make it easy for people,” Mr. Miller told CO. “We look for high-dense neighborhoods with access to public transportation.”