Put a Ring on It: SL Green Installs Sarah Morris Painting in Tower 46 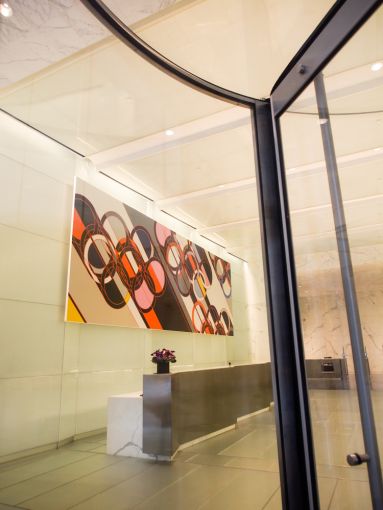 SL Green is making its Tower 46 one of the artsiest places in town (Photo: Celine Haeberly/for Commercial Observer). tcullen2015

Apparently, if you’re a tenant in SL Green Realty Corp.’s Tower 46, there’s no need to schlep to a museum to get your fill of art and culture. Your landlord will bring it to you.

SL Green, New York City’s largest office landlord, is committed to incorporating fine art into its properties. Robert Indiana’s LOVE sculpture—those four letters in big red blocks stacked on top of each other—sits outside of the company’s building at 1350 Avenue of Americas. The artist’s HOPE sculpture (same idea as its more recognizable LOVE counterpart) is adjacent to 810 Seventh Avenue. And the firm has installed photography in the lobby of its 919 Third Avenue property.

Now, Tower 46, the 34-story building at 55 West 46th Street, is getting its own burst of color and canvas. The company has installed a 9-1/2-foot-by-28-1/2-foot painting by British artist Sarah Morris into its Skidmore Owings & Merrill-designed lobby.

The painting—concentric, interlocking rings done in black, gray, orange, blue and white that float along the surface of the painting interspersed with strong diagonal lines—resembles a grand, abstract Olympics logo. The title is 2008 (Rings), a nod to its source of inspiration, the Beijing Olympics.

2008 (Rings)’s new home is in the 300,000-square-foot commercial condo SL Green purchased for $295 million in 2014 after Extell Development completed construction on the property.

“It was a beautiful building but it lacked a little bit of energy in the lobby,” said Stevel Durels, an executive vice president and director of leasing and real property of SL Green. To add vibrancy, SL Green set out to find artwork that would invigorate the space. The firm hired art adviser Lisa Marie Marks, who proposed a handful of artists whose work would enliven the lobby. SL Green landed on Ms. Morris’ piece, which had been previously exhibited in China and Italy.

“It is an important painting by an important painter,” said Ms. Marks, who noted that Ms. Morris’ work incorporates a lot of architectural concepts. “Her work is powerful and dynamic. [The painting] brought the qualities that SL Green wanted to bring to this lobby.”

Ms. Marks also stressed that it was not seamless incorporating art into the glass-walled lobby. The piece was bigger than the doors, and SL Green had to take down the curtain wall to bring it into the building.

“When you have very upscale pieces of art, it communicates to prospective tenants a real commitment by the landlord to operate at a heightened level,” he said.

Peter Turchin, a vice chairman at CBRE and the exclusive leasing agent for the building, said that installing the Morris piece is a sign that SL Green is asking “how can we make this building even better?”

“They’re very into the arts,” said Mr. Turchin. “And they want to make good things even better.”

The building at 55 West 46th Street is one of the newest buildings in Midtown Manhattan. Mr. Turchin said he is courting financial services firms, law firms, hedge funds and consumer product firms that appreciate the benefits of new construction, though as of June 4 no leases have been signed. The property features column-free floors, high ceilings and brand-new systems.

“SL Green has a huge commitment to the assets they own, whether it’s repositioning 280 Park or 919 Third,” said Mr. Turchin. “Now that they’ve taken over this asset… they’re putting their mark on this building.”