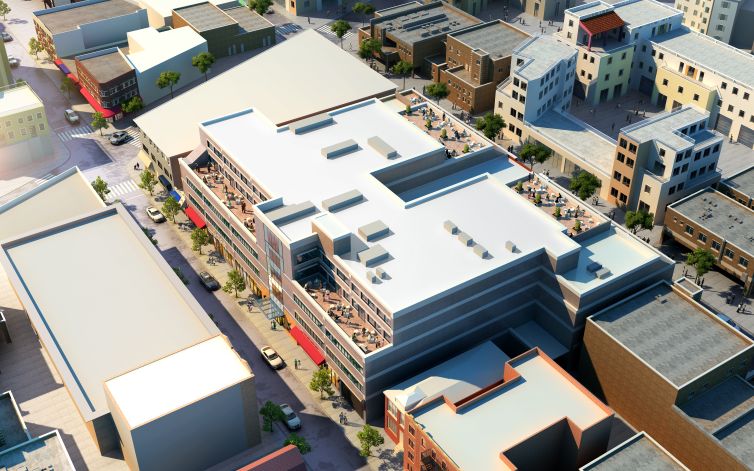 A rendering of 1630 East 15th Street with the additional two floors.

Nearly a year after buying two mixed-use Midwood, Brooklyn, properties for $79.1 million, the owners are hoping to tack on 60,000 square feet at one of the plazas for one or more tenants to occupy, Commercial Observer has learned.

A partnership led by Infinity Real Estate wants to add floors four and five to the 160,000-square-foot building that is 100 percent occupied with tenants including TJ Maxx and NY Sports Club on the ground floor and medical tenants like Visiting Nurse Service of New York and New York Eye and Ear Infirmary of Mount Sinai on the second and third floors. Hundreds of parking spaces are below grade.

“It’s been some time since anyone developed real new legitimate office space in Midwood,” said Timothy King, a managing partner at CPEX Real Estate Services in New York, who is marketing the 60,000 square feet along with colleagues Richard Novak, Rosanna Tapang and Timothy Cahaney. “It speaks to the strength of the marketplace and demand. Once you leave the Downtown Brooklyn central business district there are very few, real, or what I call Class A office spaces, in the outer boroughs.”

Alan V. Rose Realty Company built Kingswood Center at 1630 East 15th Street between Kings Highway and Avenue P in 2007, five years after purchasing the property along with a lot on the south side of Kings Highway between 13th and 14th Streets. As AVR constructed the building on East 15th Street, the area’s zoning changed and it could have added 60,000 square feet on top, said Mr. King, who leased the office space to the current tenants. But, because VNS needed to get into the building by a certain date, AVR didn’t have time to max out the floor area ratio, or FAR.

In anticipation of the addition, however, AVR erected the building in a way that makes it easy to tack on additional square footage. For example, Mr. King said, there is a dummy shaft in the lobby where the new elevator will be. The renovation has been designed by architect Larry Rosenbloom of Zyscovich Architects.

Asking rent for the new space is in the low-$40 per square foot, Mr. King said.