Talking SHoP: Gregg Pasquarelli on His Projects Changing the Fabric of NYC 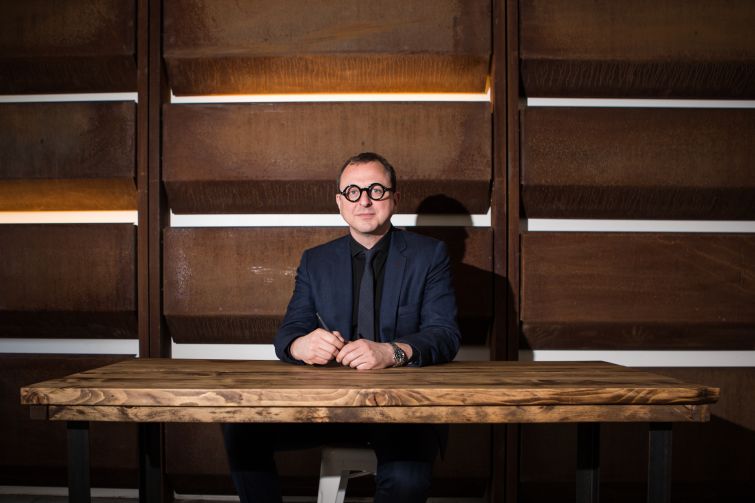 In 2005, Larry Bijou, the managing director of Bijou Properties based in New Jersey, was looking for an architect to redesign the Philippine Desiccated Coconut Building in Hoboken. Mr. Bijou was a young developer at the time, and was searching for an architect who could deliver a product similar to the Tribeca lofts that sat across the Hudson River from the site. Though he interviewed a number of teams for the project, he ultimately landed on SHoP, the New York-based architecture firm led by Gregg Pasquarelli and five other principals. Mr. Pasquarelli took the lead on the development, which called for converting the five-story, 35,400-square-foot former coconut warehouse into luxury condominiums.

But he did it with style—an eye for co-mingling the historic and the contemporary.

“Gregg[’s] insight into saving this relic and melding a zinc facade addition to the existing structure, blending the old and the modern, were the key elements to choosing [him for the project],” Mr. Bijou told Commercial Observer.

Mr. Pasquarelli is always concerned about the impact a project will have on the surrounding area, and converting the Philippine Desiccated Coconut Building was no exception.

“[For us], I think it’s very much about how does a building work and what do you want it to do in the city,” Mr. Pasquarelli said. “It’s using very traditional materials that we see whatever city we’re building in. We look at how that city was made and why they use those local materials. And then we use digital fabrications or the computers making it to make a very contemporary version of that.”

The successful conversion of the warehouse into the 35-unit Garden Street Lofts was completed in 2009. For its sustainable design, SHoP Architects was presented with the “Beyond Green” award by the Sustainable Buildings Industry Council in Washington, D.C. Garden Street Lofts was also the first multifamily high-rise in New Jersey to be awarded the LEED-gold certification.

“Working with Gregg was a terrific experience for Bijou Properties,” said Mr. Bijou. “I was fortunate to have had the opportunity to work with such a talented individual whose innovative style and positive attitude helped make [Garden Street Lofts] a huge success.”

Since Garden Street Lofts finished six years ago, Mr. Pasquarelli and SHoP’s stature in the design world has skyrocketed. He and the firm have embarked on far more prominent, and complicated, projects, including Howard Hughes Corporation’s revival of the South Street Seaport, Forest City Ratner Companies’ Barclays Center and Two Trees Management Company’s master plan for the former Domino Sugar refinery. It designed Essex Crossing on the Lower East Side and the Empire Outlets on Staten Island.

It seems unfathomable that Mr. Pasquarelli was close to forgoing a creative career to work in finance. Despite a proclivity for inventiveness in his youth—as a child “all I did was play with Legos and model trains,” he said—Mr. Pasquarelli, now 50, graduated with a bachelor’s in science from Villanova’s School of Business and embarked on a career in banking at Citicorp. However, Mr. Pasquarelli felt unfulfilled.

“It just was not terribly motivating and I wanted to do something creative,” he said. So Mr. Pasquarelli went back to school to study architecture as part of a three-year program at Columbia University’s Graduate School of Architecture, Planning and Preservation. Columbia proved to be a solid choice for Mr. Pasquarelli; he and five of the six principals of SHoP met at the school. (One of the partners is Mr. Pasquarelli’s wife, Kimberly Holden, and the sixth principal, Vishaan Chakrabarti, is the Marc Holliday Associate Professor of Real Estate Development at GSAAP.)

Mr. Pasquarelli noted that all six principals at SHoP had different careers prior to returning to architecture school, which provides each of them with a unique perspective when approaching design.

“I think that that opened up a way of being willing to freely adapt other modes of problem-solving from other industries and trying to bring them to architecture,” he said.

Mr. Pasquarelli estimates that the firm, which has over 200 employees all based out of the Woolworth Building in Lower Manhattan, is working on 40 projects at the moment. Today, approximately half of SHoP’s projects are in New York; the other half are scattered across the globe. Right now, SHoP projects are ongoing or completed in Mexico, Botswana, Kenya, China, South Korea and Australia.

Unlike many architecture firms that specialize in certain types of design, SHoP has remained a general practitioner “like the old-fashioned town doctor,” Mr. Pasquarelli described.

“We never want to be specialists at any one thing,” he said. “We actually think that architects are good at [taking a broad approach] and when they get too specialized, they become formulaic.”

SHoP’s proposals are not immune to controversy; many of its designs have been put on trial in the court of public opinion and have been assailed by politicians, including its South Street Seaport design (for the height of the New Market building) and the Barclays Center (for the density on the site).

Yet Mr. Pasquarelli remains undeterred from taking on projects that incite passion from detractors.

“I believe that one of the greatest things about New York is the constant reinvention of itself,” he said. “And I believe that it’s a city that’s tough enough to take change and to try out radical ideas and to push boundaries.”

Regarding the redevelopment of the Domino Sugar factory spearheaded by Two Trees, Mr. Pasquarelli said that the design will catapult the development into a 24/7 community equipped to handle the influx of new residents.

And Domino has both. The SHoP design added 60 percent more publicly accessible open space than a city-approved 2010 plan at the 11-acre site and will include a public school, though the architect for the school has yet to be determined.

Yet, of all of the projects he’s worked on, Mr. Pasquarelli said designing the Barclays Center in Downtown Brooklyn has been the most memorable.

“Barclays was amazing,” he said. “It was such an unusual thing to come into such a controversial project so late and then to have to try and solve it so quickly, and then to do a radical building.”

“The brief was challenging and the schedule grueling—essentially one year to deliver a stunning design within a defined budget and aggressive build schedule,” MaryAnne Gilmartin, the president and chief executive officer of Forest City Ratner, said of her company’s demands for SHoP.

Mr. Pasquarelli had been recommended to Forest City by David Childs, the chairman emeritus of Skidmore, Owings & Merrill, after the original Frank Gehry plan was deemed too expensive.

“It took more than one meeting for us to see the creative genius at work. But we saw that within weeks of the first sit-down,” said Ms. Gilmartin.

Mr. Pasquarelli said the stadium was inspired by Brooklyn’s post-industrial moment. Stone, he said, reminded him too much of the Yankees. Stainless steel would be too L.A.

“There there was something for us between a kind of raw, gritty material but then executed in an incredibly sexy snakeskin, Chanel-y kind of way,” he said. “That’s kind of what Brooklyn’s like.”

The Barclays Center is seen as a huge leap in the evolution of Brooklyn, and Mr. Pasquarelli is confident that SHoP will continue its commitment to help cities maximize their potential.

“It’s about believing in the power of cities,” he said. “And realizing that density is both green and inclusive. If you want to build great cities that become great economic engines and great social liberators and ways for us to exchange and be good neighbors, [cities have] got to be beautiful and … have this infrastructure, and that’s what we’re totally committed to.”

This philosophy has won him the admiration of developers with whom he has partnered.

“Gregg is special,” Ms. Gilmartin said. “I believe in the years to come he will be recognized as one of the great architects of our time for his great contributions to our city in terms of solid architecture.”