Slate of Hot Retailers Headed Below Ground at Columbus Circle 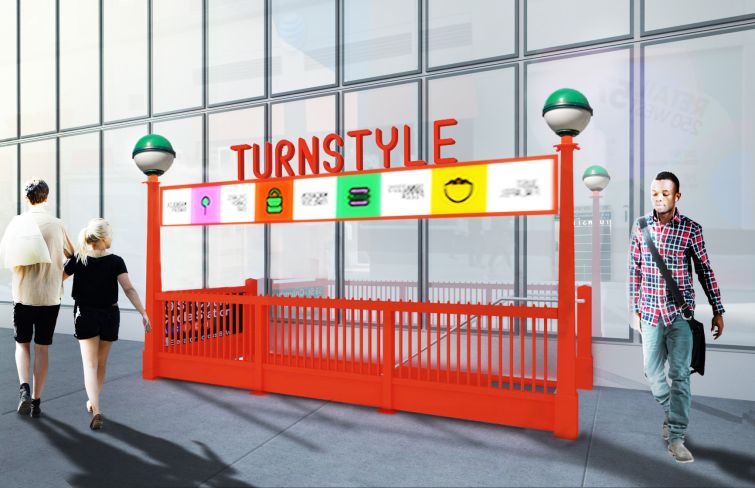 Less than a week after a master lease was signed to allow for development of the underground Turnstyle transit marketplace just outside the Columbus Circle subway station, Commercial Observer obtained a list of tenants who have signed leases in the 14,750-square-foot space.

On the southern end of the 34-shop mezzanine-level shopping center is the food court with the following tenants: Ignazio’s Pizza, Gelato Ti Amo, MeltKraft grilled cheese, Bosie Tea Parlor, Ellary’s Greens organic café. There is a lease still out for a cupcake shop. The food court will be the only area in the shopping center with seating, Susan Fine, the developer of the shopping concourse, told CO, and it will offer live music.

At the north end is the grab ‘n go food section which will include Dylan’s Candy Bar, as CO previously reported, as well as Georgia’s Café and Bakery, The Nut Box, Fika espresso bar, Just Falafel street food and By Suzette crepes. In the works are deals for a bank, a coffee shop and a juice bar. (CO reported in May 2014 that Magnolia Bakery had signed a letter of intent on the north end, but it has since pulled out.)

In the middle is the retail section which will be home to “impulse buy” items and those things you want to grab on your way to and from home, Ms. Fine said. Tenants include Blossom Du Jour vegan fast-food (which is situated where food transitions to dry uses), Spectre & Co. men’s accessories, Studio Manhattan handbags and accessories, Lush handmade bath products, Arth hats, Specs New York eyewear and Kit’s Underground Wine and Spirits. A lease is out for Papyrus card and stationery store, Ms. Fine said, and deals are in process for a craft beer shop, a donut shop and a cell phone accessories store.

“We’re trying to pack a lot of choice into a small market,” she said, noting there are 90,000 people traipsing through the subway station daily. “What I’m trying to do is slow them down, catch their eye.”

All told, the climate-controlled center is 75 percent leased.

“This is not your typical subway concourse, with a shoe repair and newsstand as you go up the stairs,” the property’s retail team from Lansco—Robin Abrams, Lisa Rosenthal and Ryan Bergman—previously emailed CO. (The Lansco team is no longer the exclusive broker/consultant, but continues to work closely with regard to the initial deals and has several more pending.)

Ms. Abrams emailed yesterday: “To her credit, Susan Fine worked closely with Lisa, Ryan and myself at Lansco, as well as other professionals on her team (architects, engineers, contractors, attorneys, etc.), to carefully craft every detail, from the branding to the physical aspects of the spaces to the merchandising and leasing.”

Columbus Development LLC signed a 20-year lease with the Metropolitan Transportation Authority last Friday. Final design plans were submitted to the MTA on May 20, enabling construction to commence 30 days after, upon approval from the agency. Ms. Fine hopes to open Turnstyle by the end of the year.

As The Wall Street Journal reported on Monday, Goldman Sachs Urban Investment Group is providing about $3.5 million in equity investment and about $9 million in debt for construction at the $14.5 million project.

Ms. Fine told CO that she and her friends are providing the remaining funds. The deal with Goldman was contingent upon the project achieving a certain level of pre-leasing based on net operating income, Ms. Fine noted, declining to cite the amount.

This is “the first time the MTA has privatized at all,” Ms. Fine said, and Turnstyle should give the MTA $20 million to $30 million in revenue over a 20-year period.

In November 2013, the MTA selected Ms. Fine to transform the station into an upscale retail destination, as CO previously reported. She made an economic deal with the MTA and then this March that deal was modified to increase the percentage rent breakpoint.

Ms. Fine is proud that she is enabling healthy food to come into the subway system, as are the Lansco brokers.

“We have all of the natural drugs—caffeine and sugar—and we want some more healthy fast-serve food options,” Ms. Abrams previously told CO. “We could’ve done all sugar and coffee we had so much interest.”