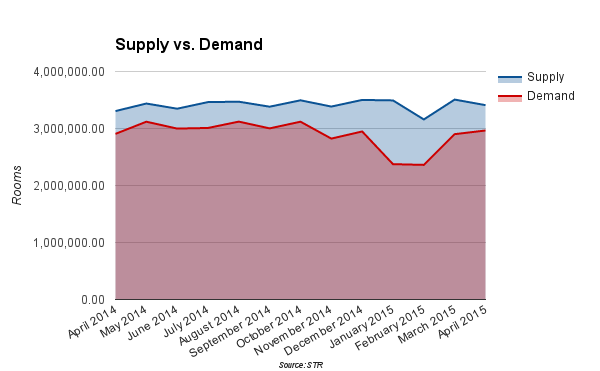 Prices for a hotel room continue to dwindle in the city compared with last year, and the gap between available bed nights and demand for them is still wide, according to April data collected by hotel bench-marking firm STR. Hotel experts blame newer options such as Airbnb, increased hotel construction and a strengthening dollar for the staggering performance.

The Hotel Trades Council, which represented hospitality workers in the city, blamed growing interest in Airbnb, which it has launched a staunch campaign against, for the dwindling desire for traditional hotel rooms.

“Not only do you have all these hotel units coming online, but you also have thousands of illegal rooms coming to market via airbnb and such sites and that increases supply almost exactly the same way,” said Josh Gold, the director of political and strategic affairs for HTC, in an email.

Earlier STR reports estimate 29,000 rooms in 200 hotels are in the construction pipeline in the years to come. If all of them are built, there will be more than 800 hotels with a total 142,000 rooms throughout the five boroughs. As a result, supply will continue to increase until 2016, as Commercial Observer reported last month, with demand dwindling during that time.

While ADR and RevPAR are increasing as prime tourist season approaches, each month this year has posted either loses or mere gains compared with the year earlier, according to STR.

The strain is showing slightly on the industry’s total revenue. STR reported revenue for the year ending in April was $2.31 billion, a 2-percent drop from the $2.35 billion a year earlier.

But the biggest threat could come from the U.S. dollar, which is expected to further strengthen against foreign currency this year. During the Great Recession, when the dollar weakened, demand for hotels in the city increased by roughly 2.5 million between 2009 and 2010, according to STR. While demand is currently at its highest in the city’s history, this summer tourism season is expected to be cooler than years past as the dollar experiences a rebound.

“I’m expecting that the weakness in the hotel fundamentals will continue through the summer,” Sean Hennessy, the chief executive officer of hotel investment advisory Lodging Advisors, told CO. “This year it looks like at best it’s going to be a wash in terms of pricing power for New York.”