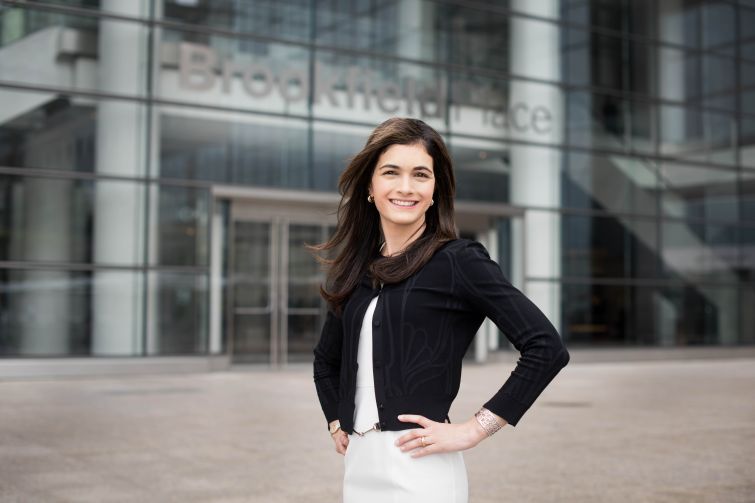 This year’s trip to Las Vegas for the International Council of Shopping Centers’ RECon event will be two-fold for Soozan Baxter.

Yes, there’s the business angle. There will be meetings with retailers, like Trina Turk and Tumi, there will be networking functions, and all the other labor/fun that goes on at ICSC.

But the independent New York City-based contemporary and luxury market retail consultant will also be ringing in her 40th birthday with a group of 10 industry girlfriends at the Vegas outpost of Il Mulino Italian restaurant inside The Forum Shops at Caesars.

“Soozan is fiercely loyal to her friends and her business,” said Ms. Silverman, who also provides comprehensive luxury leasing services to landlord clients.

The duo only first worked together recently on the 300,000-square-foot Brookfield Place in Lower Manhattan, much of which opened in March.

Ms. Baxter helped the in-house Brookfield Place team “fine-tune their pitch materials,” and select a marketing agency, among other things, she said. From a leasing standpoint, Ms. Baxter was instrumental in bringing Aspen, Colo.-based, high-end cosmetics company Cos Bar to Brookfield Place.

“No one had really heard of them and I was excited to bring them in,” Ms. Baxter told Commercial Observer over breakfast at The National. “I introduced them, I called on them, I presented to them. I brought them in.” She was also “a big part of the Gucci deal. That was my baby. [And] I was very involved with the Tory Burch deal.”

Cos Bar’s broker, Brad Mendelson from Cushman & Wakefield, said he wasn’t so sure he would have committed to a lease in what was then a proposed retail development.

“I wasn’t 100 percent sure they were going to pull it off,” Mr. Mendelson said. “She made Cos Bar comfortable that they would be surrounded by luxury brands.”

While she was working on Brookfield Place, she was juggling three other clients.

“Soozan has been very strategic having her individual clients feel like they are her only clients,” Ms. Silverman said.

She will work on up to four projects at a time—right now it’s Hudson Yards for Related Companies and Oxford Properties Group (her client is just Related), Market Street at the Woodlands in Houston, Texas, and High Streets in Aspen, Colo.

As an independent contractor she can be selective.

“I have said ‘no’ to a lot of outlet projects because I think my best relationships are with the luxury and contemporary brands,” the owner of the five-year-old Soozan Baxter Consulting said. “Those deals to begin with are far and few to come by. And it is a hard sell in the outlets. It is not to say that I am afraid of hard work, but not every outlet center is going to be able to be Woodbury Common. So that is where I have said a lot of no’s.”

She only commits to projects that excite her.

“I say ‘yes’ or ‘no’ based on whether I have passion for a project,” Ms. Baxter said. “I have to believe in the project fully. I am not saying that in a flip way.”

When it came to Brookfield Place, Ms. Baxter was familiar with the area. Not only did she live three minutes away from Wall Street for seven years, she had worked at the World Trade Center as an intern while in college. She rollerbladed on the West Side Highway and bought her first suit at the Elie Tahari store in the World Financial Center.

“I knew that neighborhood as a consumer, so it was very easy for me to pitch that,” she said.

It was that knowledge of the neighborhood that made her an obvious pick for Brookfield Office Properties at Brookfield Place.

“She lived downtown for a number of years so she understood the opportunity and the transformation and was effective at conveying that to potential tenants,” said Edward Hogan, the national director of retail leasing for Brookfield Office Properties who recently departed for Vornado Realty Trust. “She is a very positive person who knows how to get people excited about retail projects.”

Ms. Baxter is also known for an attention to detail and an intense familiarity with luxury tenants’ brand, heritage and culture. When she met with Omega, another of Mr. Mendelson’s clients, she wore her late-father’s old Omega watch to the meeting (Omega opened in Brookfield Place). That conscientiousness is something brand executives notice.

“When we were doing the meetings with Gucci, for example, I would always wear something Gucci,” Ms. Baxter said of the time working at Brookfield Place. “I think that it was appreciated.”

Being a free agent gives Ms. Baxter more freedom to speak the truth. While a broker (Ms. Baxter actually has her real estate license though she’s never done a deal) gets a commission based on signing a lease, Ms. Baxter is paid a monthly fee.

“To some extent, does it matter whether it is Old Navy or Foot Locker to a broker?” she said. “They are tasked with filling the space … I am not saying that all brokers are like that, but at the end of the day, if Duane Reade is going to pay more than Foot Locker, the broker is going to make more money doing the Duane Reade deal than the Foot Locker deal. Trust me, some people may think that it is going to make me less incentivized to work. No, I am very incentivized to work. It is just that you are going to get a really honest opinion from me.”

As of May 1, Related hired Ms. Baxter to join the leasing team at the 18-million-square-foot Hudson Yards, a ground-up development anchored by a 200,000-square-foot Neiman Marcus.

The remaining retail space is 400,000 square feet and the food and restaurants will comprise 130,000 square feet. The majority of her time is now invested in this project, and she meets with Related at its offices a few times a week.

“I am beyond excited to collaborate on a history-making project that is being done by a fantastic developer, and [with] the people I have interacted with thus far,” she said.

One of those people she has been working with closely is Webber Hudson, an executive vice president of Related Urban.

“We are thrilled to have Soozan as part of our team,” Mr. Hudson said via a spokeswoman. “Hudson Yards will redefine shopping in New York and her past experience, particularly with luxury and contemporary brands, is a perfect match with ours. She knows us well and shares our vision of Hudson Yards as New York’s next great neighborhood.”

Related and Oxford are building a mini-city at Hudson Yards, a fact that is impressive to Ms. Baxter.

She said: “I mean, it is unbelievable when you think about what is happening at Hudson Yards—the amount of jobs, office, the amount of residential, high-end residential, the transportation infrastructure, the hotels, the cultural component and then, of course, the retail. That goes without saying. [There is] $20 billion of private investment—it is kind of amazing. I mean… where else in the country do you see that happening?”

The appeal of Related as a company dates back to the construction of the Time Warner Center. When she was at Barnard College, she had an internship at 50th Street and Broadway and would walk by Columbus Circle on her way home to Morningside Heights.

“This was when the Coliseum was being rebuilt as the then-AOL Time Warner Center. I saw this happening,” Ms. Baxter said. “Columbus Circle at that time was nothing. If you look at old photos of it, it wasn’t a place that you would go. It just wasn’t. This was the mid-1990s. Now look at it.”

Today, Ms. Baxter spends quite a bit of time at the Time Warner Center, meeting clients at the Mandarin Oriental, New York, and walking her Coton de Tulear, Scout, inside the mall when it’s cold outside. (He doesn’t do his business on the floor, don’t worry!) Ms. Baxter works from her home—“I have a two-bedroom apartment and one bedroom is completely an office”—in the Columbus Circle area.

While Ms. Baxter had hoped to become a journalist (she graduated from Columbia University’s Graduate School of Journalism), working in the retail sphere made sense. Her father was a founding partner at Syracuse, N.Y.-based Pyramid Companies, the largest privately owned developer of shopping malls in the U.S. While her father had been long gone, Ms. Baxter ended up working at the company for two years starting in April 2002 when she was mulling her next career move.

From there, Ms. Baxter, a native of a town outside of Syracuse, worked at Baltimore-based Prime Retail, which had a large outlet mall portfolio before being sold to Simon Property Group (the company where her boyfriend, Mark Silvestri, is the chief operating officer of the Premium Outlets division), most recently as vice president of luxury brands. It was here that she established relationships with luxury brands like Nordstrom, Carolina Herrera, Dior, Dolce & Gabbana, Salvatore Ferragamo and Ermenegildo Zegna. She worked from New York City for the last two years, making a transition to launching her own business in April 2010 a fairly easy transition.

While she is only a one-woman show, Ms. Baxter has established strong relationships with people in the industry.

“I may not have a Rolodex—do people even call them Rolodexes anymore?—with 1,000 people’s names in it, but the people that I know, I know really well.”

While brokerages have approached her to work for them full-time, Ms. Baxter is happy with the direction her career is heading.

“She hasn’t wavered on her position as a consultant even though numerous companies have come to her to hire her,” Ms. Silverman noted.

As for where she sees her career five or 10 years from now, Ms. Baxter hasn’t sorted that out just yet.

“I want to be able to say that I have made a difference on amazing projects,” Ms. Baxter said. “I think I did that at Brookfield Place. I think that when I look at that project, I can say, ‘Hey, I did that!’ I can’t say it enough—it is an amazing gift to New York City, right? When [Hudson Yards] is completely finished, people will walk over there and say, ‘I remember when this was nothing. I remember when this was the rail yards.’ Now it is a mini-city, all with private money. That to me is exciting.”