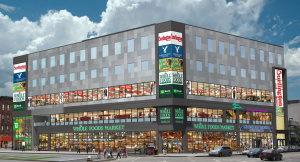 Raymour & Flanigan, the American furniture store that began in 1947 in Syracuse, N.Y., has signed a lease at Jeff Sutton’s Wharton Properties’ six-story retail development on West 125th Street in Harlem.

According to The New York Post, the company has taken 40,000 square feet on the second floor of the 200,000-square-foot building at 100 West 125th Street. Other tenants who have signed leases at the development, set to open in 2016, include Whole Foods, American Eagle Outfitters, Burlington Coat Factory and the Olive Garden.

Commercial Observer previously reported that each lease at the property is for 20 years.

Neither Wharton Properties nor Raymour & Flanigan immediately responded to requests for comment.

In recent decades, Harlem has undergone a retail renaissance which has also impacted the surrounding area. Shopping complex Harlem USA, which opened at 322 West 125th Street in 2000, catalyzed the 125th Street corridor into becoming a shopping destination.