Mark Jaccom Is Bringing a Wholesome, Aboveboard Ethos to the Tenant Rep Business 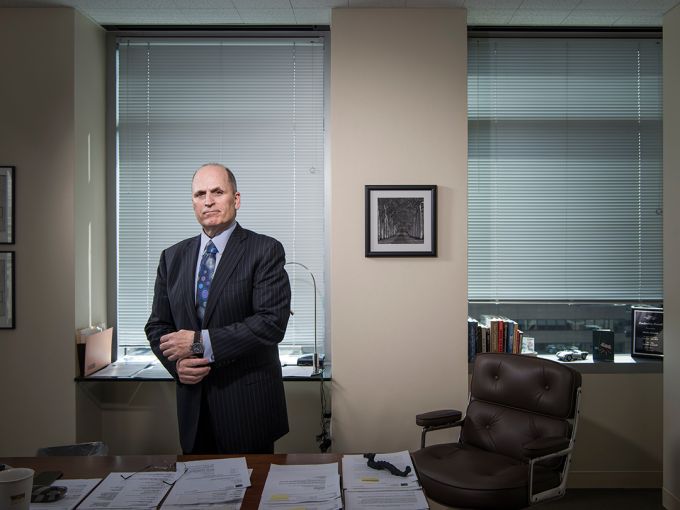 Marc Jaccom is forging his legacy by bringing a wholesome attitude toward tenant representing. (Sasha Maslov for Commercial Observer)

Mark Jaccom says he is in the process of building his legacy. And that legacy is the rise of Cresa New York, the tenant representation firm that he took over in 2012 and has been steadily growing since.

“This is my last show,” Mr. Jaccom, the president and managing principal of Cresa New York, said of the firm, of which he knew little about before becoming its head. Mr. Jaccom, well known in real estate circles, has been in commercial real estate for over 35 years and has come out of retirement twice; he insists this will be his final act.

And under his guidance, Cresa New York is unquestionably evolving. In three years, Mr. Jaccom, 60, has grown the firm to close to 50 people, from 13 when he began (in the past year alone Cresa New York has hired 10 new employees). It went from having two part-time consultants to 14 consultants. Last year, the firm represented tenants in more than 1.2 million square feet of deals across the Metro New York area, with its bread and butter being deals between 10,000 and 75,000 square feet. When Mr. Jaccom started, it was doing close to 150,000 square feet of deals.

“This place has made me rejuvenate myself,” he said. “I will eventually give the keys to someone else to run the show, and then I want to be a mentor.”

Mr. Jaccom himself presents an interesting dichotomy; within minutes, he describes himself as compassionate (“Listen, I have daughters so I’m very sensitive”) and tough as nails, stemming from his hardscrabble childhood in the Bronx.

“I was brought up on Pelham Parkway. Rough area,” said Mr. Jaccom. “I lived in the projects. We came from nothing. I probably grew up with 10 people [in my circle of friends]; seven of them are dead for various reasons. So you never lose that.”

But any trace of melancholy about this backstory quickly melts away when Mr. Jaccom switches gears to talking business. He had trouble containing his excitement about Cresa, today the largest tenant representation firm in the country, and its growth. He noted that there were previously three major tenant representation firms: Roger Staubach, Studley and Cresa. Roger Staubach was bought by Jones Lang LaSalle in 2008 and Studley was bought by London-based Savills in 2014, leaving Cresa as the last man standing. Today, Cresa has 58 offices in North America and is expanding throughout Europe.

“We’re taking the same model, and doing it throughout Europe, Asia and South America,” said Mr. Jaccom. “You’re going to see that model expand rapidly.”
Mr. Jaccom’s long career has taken him to a number of firms, but Cresa is truly his office. He owns 40 percent of Cresa New York and is the largest shareholder in the New York operation.

“I think I’m most proud here, after looking back on my different career paths … that this is mine,” he said. Mr. Jaccom has 12 partners, and has given 60 percent of the firm to others. (He said he still has “a bunch of stock” to give out.)

“We have a common constitution that we all follow, all the offices, but we’re independent,” said Mr. Jaccom. “That makes us more flexible. We have no one to answer to but ourselves.”

Mr. Jaccom spent most of his career at Julien Studley, the firm that merged with London-based Savills in 2014 to create the real estate behemoth Savills Studley.

“Studley is where I cut my teeth and I think Julien [Studley] is one of the smartest men I’ve ever met in my life,” Mr. Jaccom said. “When Julien left, that firm was never the same.”

‘We’re not just going to hire brokers…I had a couple of brokers that I knew from the past, they made millions of dollars. They can change my P&L rapidly. But culturally, they didn’t fit.’—Mark Jaccom

His original plan had been to retire at 50; after leaving Studley in 2006, Mr. Jaccom took a few months off to think about his next move before joining GVA Williams, which was sold to First Service and later to Colliers International. Mr. Jaccom then served as chief executive officer of Colliers, but said he “never fit in” at the firm.

“I was a tenant rep and when you represent landlords and you’re looking for landlord business, I believe it’s hard to really advocate or represent a tenant because you’re under
contractual obligation to fill the landlord’s buildings,” he said. “I felt my hands were tied.”

“Even though I was making a lot of money in that sense, but money’s not everything,” he said.

However, a call in the summer of 2011 from Cresa changed his course. Mr. Jaccom was relatively unfamiliar with the firm, but then compared it to Studley in various competitive markets. Cresa was larger than Studley in California and Boston, comparable in Washington, D.C. and had more offices than its competitor nationwide.

“They were purists,” Mr. Jaccom said. “They’ll have nothing to do with a connection to a landlord,” which intrigued him.

Mr. Jaccom describes Cresa New York under his leadership as a unique hybrid influenced by the culture of the firm nationally, his years spent at Studley and his own managerial style.

“We’re not just going to hire brokers. [People] go through a pretty rigorous process before they get hired here,” said Mr. Jaccom. “I had a couple of brokers that I knew from the past, they made millions of dollars. They can change my P&L rapidly. But culturally, they didn’t fit.”

Howard Cross, a principal at Cresa New York who joined the firm with Mr. Jaccom, said, “the reason why I’m still in the business is Mark.”

“I didn’t think it was a really wholesome-type industry,” said Mr. Cross. “And Mark’s a really good person. Aboveboard, fair, kind, gives everyone a chance.”

Mr. Jaccom has also been impressed by Cresa’s “culture of kindness,” built on values that are adhered to nationally.

But that doesn’t mean he thinks Cresa is too soft to compete. In 2014, it secured a 20-year, 95,954-square-foot lease for Affinity Health Plan at 1776 Eastchester Road in the Bronx. And this year, the firm helped Year Up sign a 15-year, 38,407-square-foot lease at 85 Broad Street. It has represented recognizable TAMI tenants, including Zillow and Amazon. But the New York branch of North America’s largest tenant representation firm has to grow leaps and bounds before it becomes a leasing titan.

But Mr. Jaccom sees Cresa as having joined the same league as what he calls “the big boys”: CBRE, JLL, Cushman & Wakefield and Savills-Studley.

And at Cresa, there is indisputably room for growth of its stature in the industry.