Equinox Checks Into the Hotel Business at Hudson Yards 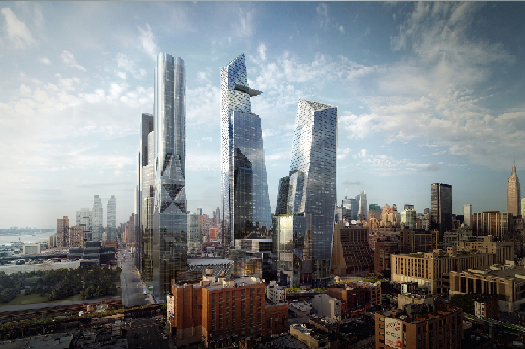 A rendering of the Hudson Yards project. (Photo: Related Companies).

The popular, high-end fitness gym Equinox Fitness is venturing into the hotel business with its first location slated for the Hudson Yards.

Featured an amenity in several buildings for Related Companies, its parent company, the gym is gearing the Far West Side hotel toward exercise-hungry travelers and will feature indoor and outdoor swimming pools, according to the Wall Street Journal. The hotel’s gym, free to guests, will be 60,000 square feet, making it the largest Equinox facility.

The roughly 200-room hotel is expected to open in 2018 at 35 Hudson Yards between West 30th and West 33rd Streets—the anchor of a planned nationwide expansion with a Los Angeles hotel slated for the following year.

There are also plans for hotels in London and Miami, and Equinox wants to carry over its gym principles, including nutrition and movement, into the hotel world.

“Expanding our club business to hotels allows us to create and support offerings for a larger audience, as an always on lifestyle partner,” said Harvey Spevak, the chief executive officer of Equinox, in prepared remarks. “We are experts in the art of life maximization, creating bespoke experiences, offering unparalleled services and always seeking to inspire through considered design.”

The hotel will also feature a SoulCycle—another Related subsidiary—as well as a world-class spa, according to Mr. Cross. It’s being designed by international architect Yabu Pushelberg, which also did upscale hotels such as the Waldorf Astoria Beijing and London Edition.

Equinox and SoulCycle have been two key subsidiaries for Related. Jeff T. Blau, the CEO of Related, told Commercial Observer last month that the goal has been to provide exposure for the fitness clubs while providing a much-desired amenity for its buildings.

Construction at the developer’s portion of Hudson Yards—built on a platform over an Metropolitan Transportation Authority staging area—is well underway. Coach is expected to begin its buildout at 10 Hudson Yards soon, with a move-in of March 2016, Mr. Blau told CO. Its neighbors in the building will include SAP and L’Oreal. The five-tower complex has also drawn the attention of Texas-based luxury retailer Neiman Marcus, which inked a deal to become the anchor tenant in the area’s retail portion.

One of the two residential towers Related is constructing, 35 Hudson Yards, where the hotel is will based, will be one of the highest residential towers in New York at 1,000 feet. That’s not too far under the city’s tallest, 432 Park Avenue, which stands at 1,396 feet tall.

“We are thrilled to partner with Equinox at Hudson Yards,” said Related Hudson Yards President Jay Cross in prepared remarks. “The new luxury lifestyle hotel concept is a natural extension of the Equinox brand and will bring an entirely new experience that caters to the needs of the sophisticated  traveler.”