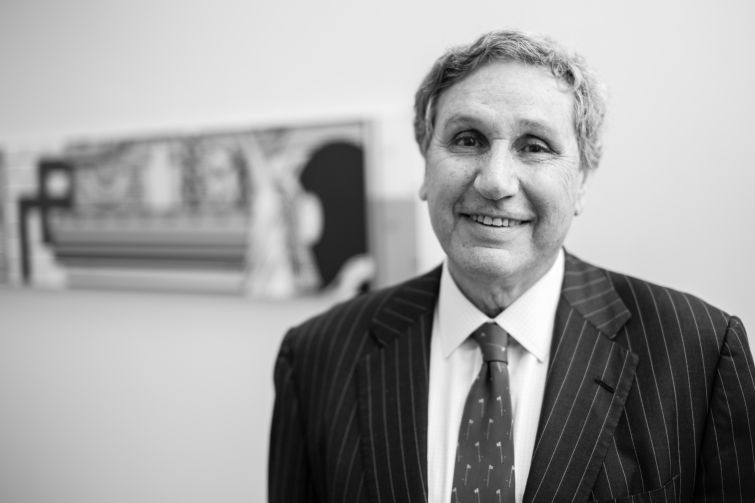 A year-and-a-half ago, City Planning Commission Chairman Carl Weisbrod was a partner at the real estate consulting firm HR&A Advisors, enjoying a comfortable life in the private sector after spending years in and out of government.

Then, in early 2014, the newly sworn-in mayor, Bill de Blasio, asked Mr. Weisbrod, who had just co-chaired his transition team, to return to the public sector and become the chairman of the planning commission. Mr. Weisbrod was “not at all” considering returning to city government, but said Mr. de Blasio was “extremely persuasive” in his argument, making his request all but impossible to turn down.

“He just … came back repeatedly and asked me to do it repeatedly and repeatedly. And my wife added the coup de grâce and said, ‘You have to do this!’ ” said Mr. Weisbrod. “So I did it.”

That’s how Mr. Weisbrod found himself as a key player in the de Blasio administration and at the helm of the City Planning Commission, spearheading some of the mayor’s most prominent initiatives, including the rezoning of East Midtown and the plan for securing affordable housing. Many of Mr. de Blasio’s skeptics who had expressed concern about the mayor’s lack of executive experience lauded his decision to tap Mr. Weisbrod, a veteran of city government who held various positions during the Lindsay, Koch, Dinkins and Bloomberg administrations. Mr. Weisbrod also spent considerable time in the private sector, having been the president of the real estate division of Trinity Church, one of the city’s largest commercial property owners.

“Carl sees past the day-to-day, and takes the long view of neighborhoods with an eye towards promoting the diversity that is our city’s hallmark,” said Deputy Mayor Alicia Glen. “He can see what a zoning change will mean not just for tomorrow, but 20 years from now.”

Steven Spinola, the outgoing president of the Real Estate Board of New York, said that when Mr. Weisbrod was considering whether to take the job with the administration, he told Mr. Weisbrod that he couldn’t think of anyone who has been better groomed to be the chairman of the City Planning Commission.

“Everything that [Carl] has done has had some element of planning, and because he comes out of the private sector as well, he’s got an understanding of what it takes to go through the process from the outside,” said Mr. Spinola, who has known Mr. Weisbrod since their days in the Koch administration some 35 years ago. “Everyone in my industry has a great deal of confidence in dealing with Carl and his entire department.”

Last week, Mr. Weisbrod enjoyed what is likely his largest victory at his current post to date when the City Planning Commission approved 1 Vanderbilt, SL Green Realty’s $1 billion, 67-story tower that is proposed to sit adjacent to Grand Central Terminal. The Class A property would be the first skyscraper in the East Midtown area in at least a decade. Mr. Weisbrod said looking at East Midtown and assessing how it could maintain its viability as the city’s premiere central business district was high on the mayor’s priority list.

“The mayor said to me, ‘The first thing that I really want you to do is let’s get East Midtown going again,’” said Mr. Weisbrod. “East Midtown is one of the key engines, if not the number one engine, that drives our city’s economy. And it is really outmoded in some ways.”

Mr. Spinola said that this success demonstrates that the administration and Mr. Weisbrod prioritized East Midtown.

“Even though it didn’t happen in the Bloomberg administration, [the de Blasio administration was] prepared to immediately begin working on it and that’s exactly what they did,” said Mr. Spinola. “They moved ahead in a terrific time frame to provide the kind of zoning changes that’s going to bring new office space to Midtown Manhattan.”

Mr. Weisbrod said he is optimistic that the rezoning of the Vanderbilt Corridor and greater East Midtown will come to fruition and that 1 Vanderbilt is a great example of the private sector paying for public infrastructure and amenities.

“These improvements will not only improve the experience for Metro North riders and subway riders who utilize Grand Central Station specifically or ultimately East Side Access riders, but also it is going to be a tremendous boon to Downtown,” said Mr. Weisbrod, citing the commuting struggles of those having trouble transferring at the station.

But what Messrs. Weisbrod and de Blasio are hoping will be this administration’s lasting legacy is making headway on securing more affordable housing, a crisis which the mayor has unabashedly declared to be his priority while in office in the spirit of ending “the tale of two cities.”

There is little debate that New York residents are being financially squeezed by the dearth of affordable housing. In his 2015 State of the City address, Mr. de Blasio cited statistics saying that “In 2014, 56 percent of rental households in New York were spending more than 30 percent of their income on housing—up 10 points in a little more than a decade.” In May, the city released its $41 billion “Housing New York” plan outlining its strategy for tackling the issue, which the mayor declared as “literally the largest and most ambitious affordable housing program initiated by any city in this country in the history of the United States of America.”

“We are very, very focused on the housing agenda … this is the issue of our time,” said Mr. Weisbrod.

Commissioner Vicki Been of the city’s Department of Housing Preservation and Development told Commercial Observer that Mr. Weisbrod’s insight and expertise were integral in shaping the affordable housing plan.

“Affordable housing is a catalyst for jobs, retail, parks, schools, streetscapes—all the features that make a neighborhood thrive,” said Ms. Been. “Our relationship with City Planning is essential to ensure that we are looking at neighborhoods and community development in a holistic way, and I cannot imagine a better partner than Carl.”

Though this administration has invested enormous amounts of time and resources into affordable housing, many in the greater real estate community have emphasized that there is no quick fix to this quandary.

“There is a lot of work to do on affordable housing. Some of it isn’t in the city’s control. Land is really expensive and it’s hard for affordable housing to compete,” said Lisa Gomez, the chief executive officer of L+M Development Partners and the chair of the New York State Association for Affordable Housing. “Construction is booming, which makes everything more expensive. Land use is an important piece but capital resources are another important aspect.”

One strategy deployed by the administration has been identifying neighborhoods throughout the five boroughs where affordable housing can feasibly take root. Rezoning is coming to East New York, Long Island City, Flushing West, East Harlem, the Bay Street Landing Corridor and Jerome Avenue to make room for more units.

“We are focused on them to help those neighborhoods grow, but also make sure that they grow in a responsible way and in a way that limits, if not eliminates, the need for the displacement for people that are living there now,” said Mr. Weisbrod.

Mr. Weisbrod says the mayor is committed not just to residents’ affordable housing needs, but to overall growth and development. And despite reluctance at the start of his term, many in the real estate community have begun to see the mayor as a partner. Mr. Weisbrod emphasized he does not see this change of heart as a result of his appointment.

“The mayor has made it very, very clear that he is pro-development. He wants to see the city grow,” said Mr. Weisbrod.

The chairman also cited the reality of the industry being intimately tied to the well-being of the city.

“[This is the] only industry that can’t pick up stakes and leave. Virtually any other industry, at least in theory, can leave New York if it wants to,” said Mr. Weisbrod. “There are very few industries where the self-interest of the industry and the fundamental interests of the citizens of the city are so deeply intertwined as the real estate industry.”