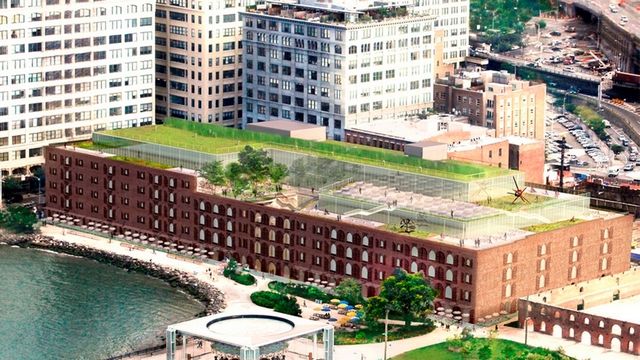 A rendering of the Empire Stores project (Photo: Studio V).

A Motor City-based watchmaker is expanding its presence in the Big Apple with a new location near Brooklyn Bridge Park, Crain’s New York Business reported.

Shinola, based in Detroit with a store in Tribeca, inked a deal for 5,000 square feet at Empire Stores, according to the paper. The specialty goods maker joins eateries East Pizza and Vinegar Hill House, which both have leases at the site, according to Eater New York. The building straddles the Dumbo waterfront.

Midtown Equities won the bid to redevelop and lease the 150-year-old waterfront commercial space in 2013. The developer has since been converting the 327,000-square-foot building into retail and office space.

Midtown Equities’ David Beare represented his firm in the 10-year deal, according to Crain’s, and JLL’s Michael Hirschfeld represented the tenant. Neither immediately responded to requests for comment.

Mr. Bear told Crain’s that all but about 7,000 square feet of the 75,000-square-foot retail space have been leased out. The expanded building will now have 380,000 square feet of office space above the retail area, according to the paper, which a JLL team is marketing.

Shinola opened its first New York location in July 2013 at 177 Franklin Street, according to New York Magazine. In addition to watches, the company also sells handmade bicycles, leather bags and goods along with pet collars and leashes, according to Shinola’s website.