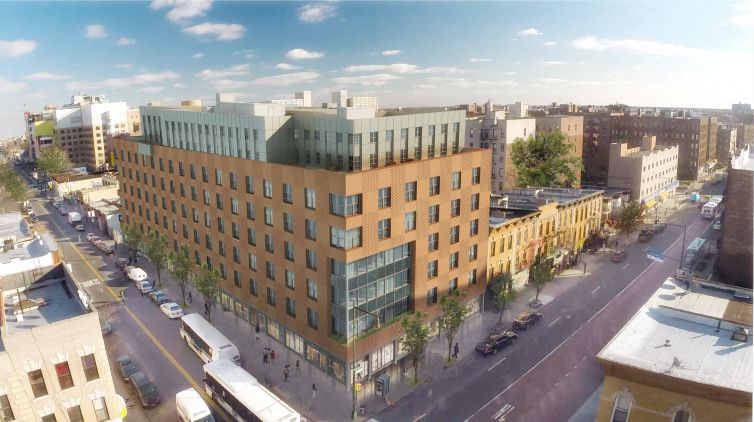 Private real estate development company Hudson Companies has picked up four parcels in Prospect Lefferts Gardens, Brooklyn, and will combine them with other adjacent properties to erect a roughly 350,000-square-foot residential development on the southeast corner of Nostrand and Clarkson Avenues, Commercial Observer has learned.

In the most recent transaction, Hudson Companies bought 318-350 Clarkson Avenue, which is comprised of four parcels with four existing buildings and a 50,000-square-foot footprint, for $13.1 million. The purchase from Health Science Center at Brooklyn Foundation, a not-for-profit organization affiliated with SUNY Downstate Medical Center, closed on March 16, property records indicate. The site offers 200,000 buildable square feet.

And on Sept. 10, 2014, Hudson Companies acquired 1295-1299 Nostrand Avenue and 306-310 Clarkson Avenue from ESP Group for $10 million, finance records indicate. The five-parcel site has a footprint of 36,430 square feet and offers approximately 145,720 buildable square feet. The site was previously operated as an indoor/outdoor parking lot, according to CPEX, which handled the sales.

“Hudson is very happy with the purchase and thrilled to continue developing in Prospect Lefferts Gardens, a neighborhood we love,” said Joseph Kohl-Riggs, the director of acquisitions at Hudson, in prepared remarks. “Transit access is excellent, with the 2 and 5 trains two blocks away and the new Select Bus on Nostrand Avenue. We’re also excited about the corner retail here—Nostrand Avenue is the new Franklin Avenue, after all.”

Phase 1 of the new residential development will include 170 apartments and Phase 2 will have 250, according to CPEX.

“We have been advising the family for more than 10 years and the timing for this transaction worked out perfectly,” said Mr. Leary in a statement. “Our clients were able to capitalize on the demand for new housing in Brooklyn. Prospect Lefferts Gardens has some of the best housing stock in terms of pre-war buildings in all of Brooklyn, but there has been little new stock added to the market. We have watched values and demand in this neighborhood consistently rise year over year.”