Downtown Developers Are Keeping an Eye On the Water 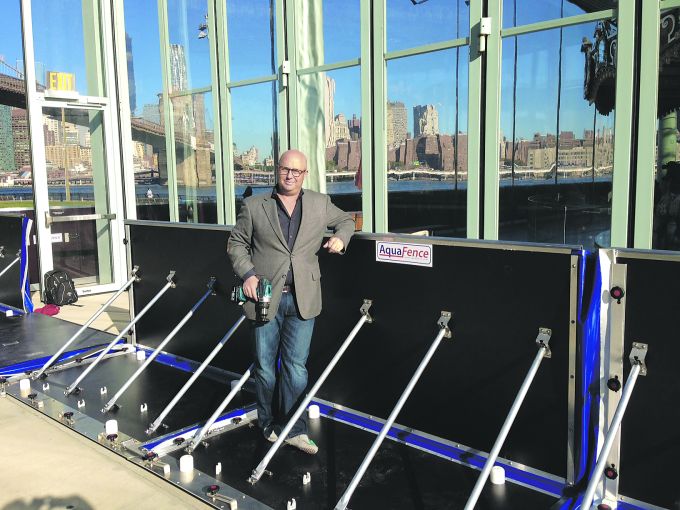 A few days after Superstorm Sandy in 2012 Jonathan Resnick was at 199 Water Street, assessing. “It was the Wild West down there,” he recalled. Eight-million gallons of water; disaster recovery experts randomly handing out cards; building owners and tenants trying to make sense of it all. “There was a real feeling of helplessness. There was nothing to do but stand, arms crossed, watching the water flow.”

After hours of watching, the president of Jack Resnick & Sons began to walk. He walked down South Street to 55 Old Slip to 125 Broad Street, where he encountered John Santora. The CEO of Cushman & Wakefield was doing what everyone else was doing: watching the water.

“You can’t fight the water. You have to adapt,” said Mr. Resnick. “In the Netherlands they live with it. If it’s going to come, it will come. We do know water levels are rising.”

New federal flood maps, expected to take effect in 2016, will place some 71,500 New York City buildings—532 million square feet of interior space—in the 1 percent annual chance floodplain, the majority of which are in Zone A, where waves above three feet are not expected.

But Sandy shook everyone. After the storm, Jack Resnick & Sons, like its peers, reinforced and reconfigured its properties. At 199 Water Street, switchgear was moved to the third floor; telecommunications and generators went to the fourth; flood barriers were purchased to protect the loading dock and the rear lobby, which faces the East River. “Short of putting a moat around the building, we’ve done a lot.”

That may sound silly or ancient, but exterior-surrounding barricades are now part of most everyone’s plan. They’re not digging trenches, of course, but they are acquiring fences. Namely: AquaFence, the storable, easily deployable and removable, FM Approved, ground-level perimeter protection that’s now part of more than 25 buildings below 14th Street. There was no market traction for AquaFence before Sandy. (See video at the bottom to hear MHP’s Norman Sturner exulting the AquaFence installed at 180 Maiden Lane.)

“Flooding has been the one thing people haven’t taken seriously, yet floods exceed fire in annual damage costs,” said Adam Goldberg, director of New York operations for AquaFence, the New Jersey-based company established in Norway in 1999. “Every other day you see a story about rising sea levels and storms getting stronger. This is a relatively cheap way to protect a building. No retrofitting. No reconstruction.”

It takes four people one hour to set up 100 linear feet of four-foot-high fence, all of which fits in the back of a pick-up truck. Compare that to the four hours it takes the same four people to set up 12 feet of sand bags, which need an 18-wheeler to be transported. Also, noted Mr. Goldberg, they’re not as effective. Here’s the science: the weight of water is two times the pressure of horizontal force. “You know how a baby pool full of just a few inches of water is impossible to pick up?” explained Mr. Goldberg. The higher and stronger the water, the harder the fences are to knock over.

Flood elevation levels determine necessary fence height (2 Water Street and 180 Maiden Lane, for example, have seven-footers). AquaFence panels come in sizes that are 4-by-7 feet or 7-by-4 feet, which fit into the largest crates that can ride a flatbed into the city (en route to a building’s basement). Connected by PVC canvas, the approximately 200-pound panels are made of marine-grade laminate (waterproof plywood), aluminum and stainless steel.

“This is part of the solution. AquaFences stop water from entering at street level. The key to flood mitigation is to be able to pump out faster than water gets in.”

The barricading of Lower Manhattan is bigger than individual buildings.

Last year the Department of Housing and Urban Development gave the city $355 million to implement an integrated flood protection system from East 23rd Street to Montgomery Street on the Lower East Side. The system, influenced by an award-winning design concept of a 10-mile, U-shaped barrier of panels disguised as parks and art, is the project of the mayor’s year-old Office of Recovery and Resiliency.

Construction is in the early stages and is expected to be complete by 2017. The ORR is seeking money to fund other sections, which will run down to the Battery and up as far as West 42nd Street.

Last week the city announced they received $8 million to design and build flood protection for Battery Park and another $6.75 million to create a system complementing the one in progress on the Lower East Side. This is just one of the city’s efforts towards a comprehensive, citywide resiliency plan that includes a number of short-, medium- and long-term coastal protection measures, said Amy Spitalnick, a spokeswoman for the city.

And it’s not just buildings in the lowest lying areas bulking up their water programs.

“We found out that the intersection [of Fulton Street and Broadway] is the highest in Lower Manhattan: 38 feet above sea level,” said David Berkey of L&L Holding Co., owners of 222 and 195 Broadway, both of which were “bone dry” to their lowest level after Sandy (and 222 Broadway even had power thanks to its generator). “But security procedures have been beefed up, and tenants will know if buildings are opened are closed.”

The storm’s effects also adjusted the company’s acquisition strategy. “Water concerns are now on the checklist. They might not deter a purchase but they’re considered. Could machine rooms be moved to a higher floor?”

That question was asked by many owners, if not every, in the days following the storm. (At Pier 17, for example, all base buildings systems have been raised above the ground levels.)

It’s an about-face for some who had been told the opposite a decade earlier.

“After 9/11 it was recommended to move all equipment, things that had been spread out across other floors, to the basement,” said Edgar Westerhof of Arcadis’ Water Management Group, specifically talking about the Verizon buildings at 140 West and 104 Broad Streets. Arcadis employs best practices from the Netherlands, where the company’s headquarters are located, to its work around the world. The 125-year-old company was hired by a number of New York businesses to help buildings clean up, recover and implement flood protection solutions.

“It was like entering a war zone the week after Sandy when water was pumped out of basements,” said Mr. Westerhof. “Sea water really eats its way through equipment. The damage after the water is gone is very impressive.” He biked Manhattan the day before and the day after the storm, taking photographs of many sites that later became projects, like those in the New York City Health and Hospitals Corporation.

Each building within the site is considered as a separate entity to ensure complete flood proofing, not just quick fixes.

“In general all of Downtown is much better prepared to deal with water. The vast majority of buildings in the at-risk elevations has purchased systems to reduce the risk of water infiltration while also moving and/or sealing critical equipment,” said Erik Horvat of Fosun Property Holdings. The company’s 28 Liberty (then still known as Chase Manhattan Plaza) did not take on water due to its location and elevation. The building has tremendous generator capacity, added Mr. Horvat.

Further, he said, office tenants face a much lower risk of extended disruption in the event of another weather-related event of this nature due to telecommunications upgrades. He referenced Verizon’s equipment location move and the replacing of 70 percent copper network (rendered useless once the storm waters penetrated the conduits below street level) with 100 percent fiber.

“Lower Manhattan now has the fastest, most advanced network in the country, an attractive by-product of the required upgrades,” said Mr. Horvat.

This testimonial is an inadvertent “thank you” to Arcadis as well—a sentiment shared by Mr. Horvat’s peers.

“Tenants are O.K.,” said Mr. Resnick. “There isn’t an exodus by any stretch of the imagination. There have been a lot of deals.”

And there are more to come.