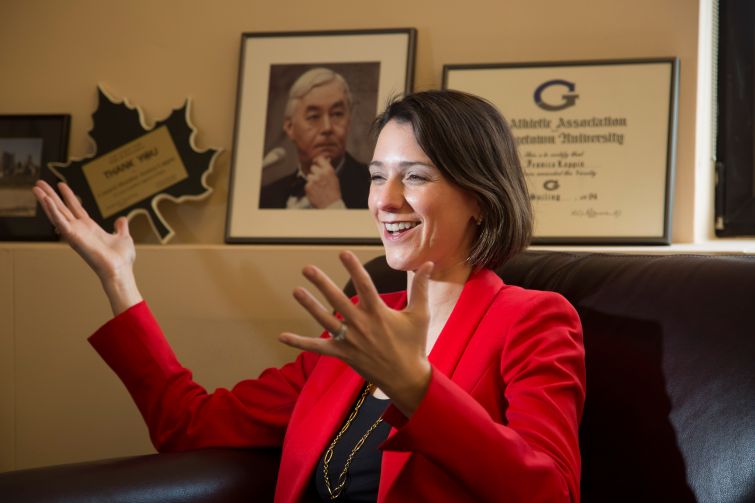 Jessica Lappin on the wave of new offices and retail hitting Downtown. mgross170

If you check out Jessica Lappin’s Twitter profile, the words “wife” and “mom” share space with “Prez of the Alliance for Downtown NY”—and her feed alternates between tweets about baking cupcakes for her son’s class along with development deals and interjections about income inequality.

Having a mother’s perspective might be just the thing an area like Downtown Manhattan needs to truly evolve from a parking lot of glass and steel skyscrapers to a real neighborhood with real people living and working in it.

Last month marked the Alliance’s 20th anniversary, as well as Ms. Lappin’s first full year as president. As she defines it, the role of the Alliance, which is the largest business improvement district in the city, is to provide service above and beyond what the city does. It ensures the neighborhood is clean and safe and provides economic development initiatives for the whole neighborhood, which starts south of City Hall and spans from river to river (excluding Battery Park City—although BPC sometimes winds up on her Twitter feed, too).

“We are at that nexus of public and private,” Ms. Lappin said. “We connect people and try to create relationships [that] can be helpful.”

And looking at last year and the year ahead, Ms. Lappin won’t be out of a job any time soon. The Downtown area is seeing $30 billion of public and private investment—the bulk of which is centered on retail and transportation. (“The so-called Berlin Wall [of Downtown] has been removed,” touted CBRE’s Steven Siegel at a breakfast panel hosted by Commercial Observer last month which Lappin also spoke at. See video below.)

Brookfield Place, which was formerly the World Financial Center, is an 8.5-million-square-foot complex with 375,000 square feet of restaurants, retail and lifestyle spots like an Equinox. (And programs for professionals, too, like the Institute of Culinary Education).

“We are going to have 200 more shops and restaurants open between now and the end of the year, compared to the 74 that opened last year,” Ms. Lappin said. “That’s a massive revolution in terms of retail and food.”

While upscale tenants like Nobu (which is moving to 195 Broadway) and Mario Batali’s Eataly set to open in the area, Ms. Lappin impressed that there are retailers and eateries opening Downtown that fit every price point—meaning there’s a diversity of businesses that can cater to every income level. On March 26 a grand opening ceremony for Le District (a French version of Eataly) will mark the first wave of openings, which will continue through the summer.

Looking ahead, “We’ve been focusing some of our efforts on Water Street, working with the city on a change to the zoning that would hopefully create more retail,” Ms. Lappin said.

She started her career in earnest as an assistant (and later chief of staff) to then-City Council member and Speaker Gifford Miller, a position that she held for seven years.

Ms. Lappin used her experience in government to strike out on her own, running successfully for New York City Council as a representative of Manhattan’s Fifth District, which covers East Midtown, the Upper East Side and Roosevelt Island.

While on City Council, she secured the financing for the Cornell Tech campus on 15 acres of Roosevelt Island and advocated strongly for the East Side’s parks.

“She has built a strong reputation as one of the harder working people in our city,” said Ben Kallos, who succeeded Ms. Lappin as the council member for district five.

“The job of a council member requires attending a lot of events…and I worked incredibly long hours…and I’d often have to bring my children [along],” Ms. Lappin recounted. “When my male counterparts [did] that, everybody thought it was ‘So sweet’, saying ‘How nice that he would bring his children!’ And when I brought mine, it was much more, ‘Oh, you couldn’t find anybody to watch your kids?’”

After having her first child, Ms. Lappin realized that the City Council office lacked a designated place for breast-feeding (something now required by law in all workplaces). She established a lactation room, and the State Assembly soon followed suit.

“She’s hardworking, but she loves her family,” said Mickey Edwards, vice president of The Aspen Institute, who has been a mentor to Ms. Lappin since she was selected as a Rodel Fellow in public leadership in 2011. “She’s one of those people who’d say, ‘You can care for your family and be a good mother, and also be a dedicated, conscientious public official. If men can have it all, women can have it all.’”

“I’m always looking, talking to people in different places and asking, ‘Who are the stars here? Who has a chance to become even more influential? And I kept hearing Jess’ name. [People would say] ‘This one is really sharp,’ and I started…talking to people about her, people who knew her and had worked with her, as I do with every [candidate],” Mr. Edwards said.

Shortly after completing the fellowship program and two terms in office, she made (and lost) a bid to become Manhattan Borough President. This was recently after Elizabeth Berger, the previous president of the Downtown Alliance, had succumbed to pancreatic cancer and the organization soon tapped Ms. Lappin to be her successor. (Ms. Lappin also serves as the president of the Alliance’s sister organization, the Downtown Lower Manhattan Association.)

It was new territory for her—not just in that she was no longer advocating for the East Side (she still lives in the East 50s), now she was entering into the male-dominated sphere of real estate. “It’s not a secret that there are not a lot of women in the real estate world,” adding, “I’m used to being the only woman in a room.” (Perhaps she was inspired by her mother, Joan Lappin, who is the chairwoman and chief investment officer of Gramercy Capital Management Corporation.)

Since taking over, Ms. Lappin has championed the completion of the World Trade Center site, which opened last year after notorious delays thanks to infighting—much of which was centered around the Lower Manhattan Development Corporation, an organization for which former State Assembly Speaker Sheldon Silver (who is now under indictment for corruption charges) publicly rallied.

The New York Post’s recently published an article claiming the LMDC had no more funds and may soon shutter.

“I worked with LMDC last summer, and at least for now they have control over Site Five,” she said, referring to the still-vacant lot marked for commercial use that could be worth as much as $500 million. “After the memorial stopped using it to line people up, a fence went up. My thought was, ‘Why would we fence off this land instead of give it to the public? Why would we want to look at a barbed wire fence?’”

She reached out to LMDC, which agreed to open the space until a decision was reached as to how it could best be used.

“There is now some discussion as to what [the space] should be, and if [commercial] is still the best use [for it].” She added that residential would realistically be the only other alternative.

Ms. Lappin said the future of LMDC is less about how much money it has and more about which loose ends must be tied up.

With the rebuilding and opening of the $1.4 billion Fulton transit hub, designed by Santiago Calatrava, Ms. Lappin says getting to and from Downtown will be a better experience.

“Every single subway line converges here,” she said. “You can come by train, by ferry—and if there’s an expansion of ferry service, that’s going to be a good thing for us.”

The flashy transit hub is a major step up for the area; Ms. Lappin said the biggest challenge facing Downtown real estate is getting people to the neighborhood, as there are “misperceptions” about how difficult it is to get there.

As a prime example she points to GroupM, the largest media investment company in the world, which secured over half a million square feet at 3 World Trade Center with a 20-year lease they signed in 2013—but not before seeing how their employees would feel about working Downtown. Originally, the majority of people in the firm were against it, but after they came down for a “field trip,” the majority of employees moved into the yes camp.

Ms. Lappin hears that kind of anecdote from brokers often. “They say, ‘It was hard to get this client Downtown, but once we did, they fell in love.’”

Advertising firm Droga5, which moved to 120 Wall Street last year, “loves being here,” she said. “Over 70 percent of their employees live in Brooklyn. Their commute is much shorter.”

Office vacancy in the Downtown area hovers at 9.7 percent, down from 2013’s highest vacancy rate of 12.2 percent.

In a bid to further attract companies from the technology, advertising, media and information (TAMI) industries, the alliance established the Lower Manhattan HQ, a full floor of 12,500 square feet of meeting and event space located at 150 Broadway that will act as a community space for TAMI employees who are working Downtown.

A few years ago, Mr. Silver secured the $2.5 million in state capital grant money to build out 150 Broadway, which can hold about 140 people.

Construction started last week, with plans to open the space by July 1.

Ms. Lappin conceded that many areas are trying to lure tech companies, “but we’re succeeding,” and added that last year was Downtown’s best leasing year since 2006. According to the alliance’s Year in Review report, 42 percent of all companies that committed to relocating to Lower Manhattan were in the TAMI sectors—the biggest deal being Time, Inc.’s 670,000-square-foot lease at 225 Liberty Street in Brookfield Place.

“At this point, we’re starting to get to critical mass in different sectors,” Ms. Lappin said.
Ms. Lappin says this is in part because of Downtown’s proximity to the waterfront, the unrivaled views (like seeing the Statue of Liberty from your desk) and the open space, which is also what is drawing new residents.

“Plus it’s still more affordable, and that’s a big draw for companies of all sizes,” Ms. Lappin said.

But Downtown is already succumbing to the New York City cycle: once an area becomes popular, rents don’t stay low for long. Ms. Lappin acknowledged that this is already happening.

“Just in our lease negotiations for 150 Broadway, [we saw that] rents are going up. Retail rents, especially along certain corridors on Broadway, are pretty high—over $560 a square foot. Certainly for ground floor retail, the numbers have been rising very quickly,” Ms. Lappin said.

And in the residential market, more than 1,300 units in six buildings will open in 2015. Last year, major projects included 1 Wall Street, which was purchased by Macklowe Properties for $585 million and is set to be converted into luxury residential and retail space. 70 Pine Street, which sold to Rose Associates for a rumored $205 million in 2011, is set to open its 644 luxury rental units this summer.

The hotel construction binge is also happening Downtown, as demonstrated by the 6,000 hotel rooms set to open by the end of the year—a 33 percent growth over 2014. In the pipeline is the Beekman Hotel in the historic Temple Court building, a boutique hotel at the Battery Maritime Building and extended stay hotel Q&C, operated by Furnished Quarters.

When asked to name the accomplishment of which the alliance is most proud since she’s taken the reigns, Ms. Lappin had trouble deciding; she was pleased to bring back Dine Around Downtown, a community tasting event, but also felt that 150 Broadway was a big win for area workers.

When asked if she ever plans to run for office again in the future, she smiled and replied as any smart politician would: “I am very, very happy here.”