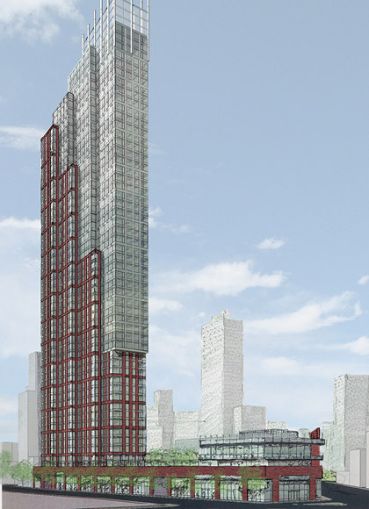 The tower once slated to be Brooklyn’s tallest is one step closer to completion—Douglas Steiner nabbed a $390 million construction loan for The Hub at 333 Schermerhorn Street, Mortgage Observer has learned.

The residential rental tower was first announced in 2012, a time when, somehow, the site at Schermerhorn and Flatbush Avenue was still described as “gritty” by The Wall Street Journal, despite its straddling the tony Fort Greene and Boerum Hill neighborhoods.

Nowadays, that locale feels positively luxe, and the cool $390 million Mr. Steiner just sourced ought to help it become even more so.

Those funds should enable the 54-story tower to grow, although by the time it’s done it will be beaten to the height record by Avalon Willoughby and 388 Bridge Street, according to a report from Curbed.

Mr. Steiner, the movie studio mogul behind Steiner Studios, bought the parcel for $30 million in 2011.

“BofA has done deals in our submarket, so they really understand our location and product, and share our enthusiasm for what we both expect to be one of the best buildings in New York City,” he told MO via email. A Bank of America representative did not respond to requests for comment before press time and a call to Apollo was not returned.

The website Yimby projects a completion date in 2017 for The Hub as of last month.