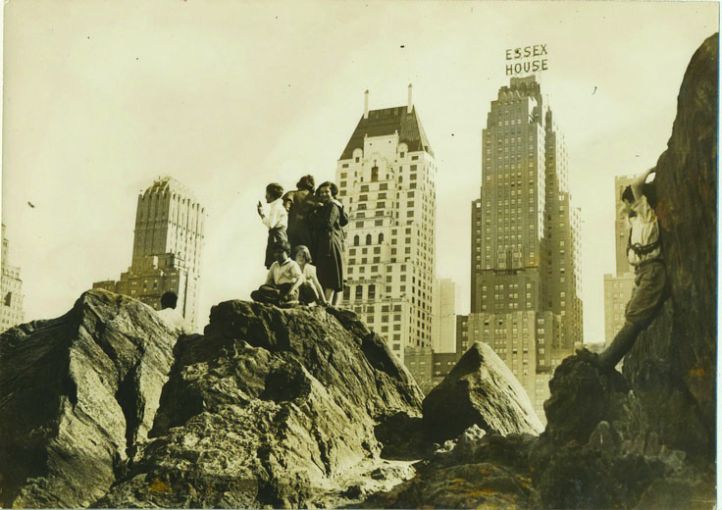 Construction on a 44-story hotel at 160 Central Park South, to be named the Park Tower and later Sevilla Tower, begins on Oct. 30, 1929, one day after the stock market crashes. The Great Depression slows construction down and the hotel opens in October 1931 as the Essex House. The following year, the hotel’s owners erect a six-story sign on the roof bearing the property’s name. The Essex House is then seized from its bankrupt owners by the U.S. Government’s Reconstruction Finance Corporation.

Samuel Golding, chairman of Sterling National Bank and Trust Company, purchases the 509-key Art Deco hotel from the government agency in 1946. American comedian Milton Berle’s mother, Sandra Glantz Berlinger, dies in her apartment at the Essex House on May 30, 1954. Broadway and Hollywood star Mary Boland dies in her sleep inside of her apartment there on June 23, 1965.

Marriott Hotels acquires the Essex House from Sterling National Bank in 1969 and operates it as Marriott’s Essex House. The renowned Russian composer Igor Stravinsky moves into the hotel that autumn and stays until his death on April 6, 1971. American jazz musician Donny Hathaway is found dead on the sidewalk in front of the Essex House on January 13, 1979, after an apparent suicide leap from the 15th floor.

Marriott sells the hotel to Japan Airlines. The Tokyo-based company runs the property under its Nikko Hotels International division as Essex House Hotel Nikko New York. JAL spends more than $75 million on renovations in the early 1990s and later sells the Essex House to Strategic Hotels & Resorts, in 1999. The new owner brings in Starwood Hotels to manage the property under their Westin Hotels division as Essex House – A Westin Hotel.

The Dubai Investment Group acquires the Essex House from Strategic Hotels in 2005 for $424 Million. The new owner places the hotel under their Jumeirah Group and rebrands it Jumeirah Essex House. Dubai Group undertakes a $91 million renovation, overseen by the Atlanta-based design firm Hirsch Bedner Associates, and converts 150 of the hotel’s rooms into condominiums.

Dubai Group defaults on $303 million in debt and Strategic Hotels reacquires the Essex House in September 2012 for $325 million—$50 million less than it had sold the property for six years earlier. The hotel is renamed JW Marriott Essex House New York as soon as the sale closes. MetLife provides $225 million to refinance the Essex House in December 2014. The three-year loan replaces a $185.8 million mortgage that Bank of America had provided two years prior.