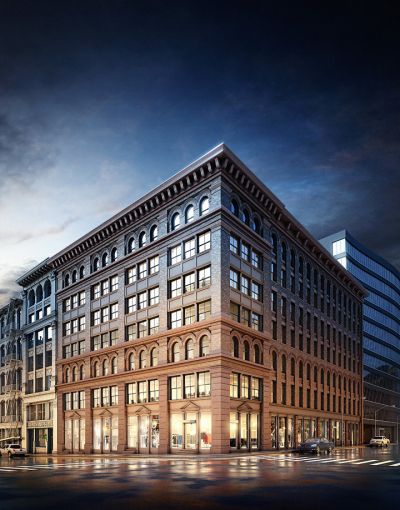 Chobani, which is headquartered in upstate New York, is moving to larger digs in Soho, the New York Post reported, although the size of the space for the Chobani corporate offices will remain the same, a Chobani spokesman told Commercial Observer.

The popular yogurt company has leased 33,560 square feet on the sixth and seventh floors at General Growth Properties‘ 200 Lafayette Street between Broome and Spring Streets. Chobani will be assuming space—the top two floors—that JCPenney had occupied. In May 2012, the department store had leased the entire office portion of the building in a 15-year deal, the Post previously reported.

“We are consolidating some other offices,” the Chobani spokesman said, including moving some offices from Charlotte, N.C., to New York City. And much of the new space will be dedicated to Chobani’s food incubator program and a test kitchen.

Mr. Owles told the Post Chobani will have the same light and air as it does in its current 11,500-square-foot space at 72 Spring Street, but can now have a dream test kitchen.

“The company wasn’t able to expand within its current building—which is substantially occupied by Marc Jacobs—and didn’t want to continue to maintain offices in multiple locations so they had to look elsewhere in order to consolidate and grow,” Mr. Owles told Commercial Observer. “They committed for 10 years and are planning an internal staircase.”

The asking rent was $85 per square foot, Mr. Amrich said.

Chobani’s current 12th-floor space is on the market for sublease with Mr. Owles and Sinvin’s James Costello. Chobani will occupy its new space at 200 Lafayette Street by this summer, Mr. Owles said.

JCPenney is on floors three, four and five, Mr. Amrich said. Another retailer occupier the first and second floors.

Update: This story was edited to include remarks from a Chobani spokesman.