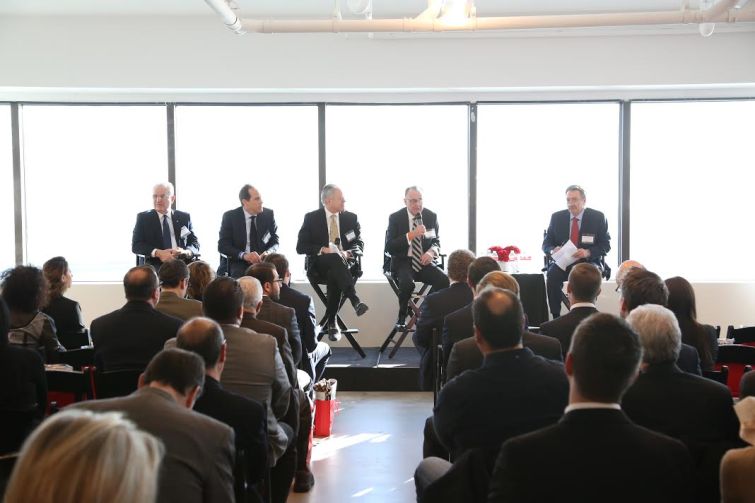 It was a who’s who of the commercial real estate industry this morning at Commercial Observer’s Downtown East Breakfast Panel, featuring Christopher Curry of the Howard Hughes Corporation, Jonathan Resnick of Jack Resnick & Sons, Stephen Siegel of CBRE and Norman Sturner of MHP Real Estate Services, and the assembled real estate pros reached a consensus: Lower Manhattan has enormous potential and demand in the area will only increase for years to come.

The theme of the panel, which was hosted at MHP Real Estate Services and Clarion Partners’ 180 Maiden Lane with expansive views of the Brooklyn Bridge and the frozen East River, was the demand for Lower Manhattan real estate and capitalizing on some of the still-untapped potential in the area. All of these New York real estate luminaries agreed: this is not your grandfather’s Lower Manhattan.

One of the central tenets of today’s breakfast was making the East Side of Lower Manhattan mirror the West Side, replete with the amenities that make the area adjacent to the Hudson so attractive.

“There is no East Side and no West Side,” said Mr. Siegel. “There is only Downtown.” Mr. Siegel emphasized that he shows prospective tenants the full spectrum of the Downtown market.

Mr. Siegel said that the “so-called Berlin Wall of Downtown has been removed,” opening up the fourth largest office market in the U.S. in an unprecedented way. Mr. Siegel cited the change of the name of the World Financial Center to Brookfield Place as embodying how various tenants with diverse needs are now making Lower Manhattan their home.

“It demonstrates the type of diversity we now have here,” he said. “I could name probably fifty tenants that have moved down here that are not finance related.”

Mr. Sturner succinctly listed all the reasons why Downtown has the edge over Midtown.

“There is more room down here. It’s less congested. Our office stock is younger than that of Midtown,” he said. “We have eight or nine methods of transportation here.”

Mr. Curry, whose company is working to revitalize South Street Seaport, stressed that Howard Hughes’ plan for the area will include creating a gathering hub where there now is none.

“We’re creating a town center that doesn’t exist,” said Mr. Curry. “We’re focusing on food, fashion and entertainment” he added, underscoring that the design specifically has New Yorkers and the growing Downtown population in mind.

This change has largely been well-received in the real estate community, which has long tried to open the Financial Center into a thriving 24-hour community. As residents continue to move Downtown, there is need for more amenities.

“The 24-hour community that is already here will continue to grow,” said Mr. Resnick. “We need more support and more services for the residential community.”