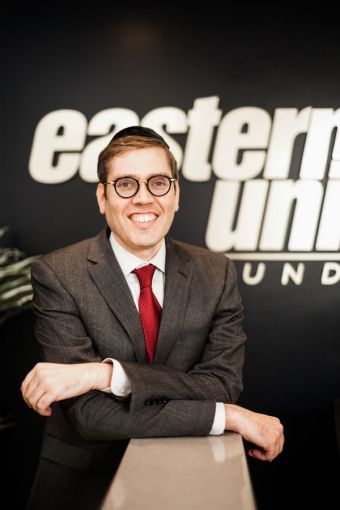 Mortgage Observer first met Ira Zlotowitz, the frenetic leader of Eastern Union Funding, last spring at the International Council of Shopping Centers conference in Las Vegas. He gave us, as he generally does any new contact, his business card: a $2 bill.

Later that evening when we needed to tip after a generous glass of wine had been provided us, we gave the $2 bill to a suitably impressed bartender. A memory of Ira was emblazoned in our brain. The shtick—literally handing out money, so that he can later source more for you—works.

Of course Mr. Zlotowitz is more than a gimmick. The 39-year-old, 17-year veteran of the industry helms a mortgage brokerage that was this year named one of New York City’s fastest growing businesses by Crain’s.

The 13-year old firm also grew even as it shed excess weight. Mr. Zlotowitz said staff dwindled from around 90 to about 45 brokers even as revenues climbed significantly in 2014—up 253 percent in the last three years, according to Crain’s. And heading into 2015, Mr. Zlotowitz is straightforward: Eastern Union could shrink its staff again.

“When people ask me if they should go into this business, I’m telling them now is not a great time,” he said in a recent interview at Eastern Union’s Howell, N.J. office. “I’m not down on those already in the business, but if it goes down, everyone is going to have to pick up a bigger market share. I am moving to [a focus on having] a quality shop.”

That type of candor is rare in real estate, and it could be part of what is pushing Eastern Union’s swift ascent.

In fact, Mr. Zlotowitz has a stern message for this industry, a field that classically takes a bullish tone in any but the most obviously slumping market.

“I think the market as a whole … there’s gonna be a lot less financing in the next 12 months,” he told us on a recent morning while juggling conference calls with his new Jerusalem office and internal meetings. “I am willing to hole up and wait for 2017,” when 10-year mortgages that were originated at the peak of the market will be coming due. “This is the first time when I am not making a projection next year to increase production.”

It’s just one way he is “less like a broker and more like an advisor”—an line he says characterizes his and his firm’s approach to deals. Of course, that’s a cliché that plenty of brokers will invoke. But when Mr. Zlotowitz instructs his brokers he takes on an almost shamanic quality.

“I tell them, ‘Talk to [clients] as though you cannot make money off them, like if you were talking to your father.’”

Of course, profit does come into the equation.

“I want to help brokers become successful, help clients solve their problems and at the same time, make some money. What could be better?”

Mr. Zlotowitz—who wears striped socks, talks with his hands and peppers his speech with random Yiddish—grew up in Brooklyn, the son of a famous rabbi who founded one of the nation’s largest publishers of Jewish texts. He began his career as a mortgage broker with Meridian Capital Group, the prolific New York-based brokerage, where he said he was a top producer until he left in 2001.

He split off that year, ready to start his own brokerage because Meridian sold a 35 percent interest to Independence Community Bank (which became Sovereign Bank, which then became Santander Bank).

“The desire was never to own my own company,” Mr. Zlotowitz said. “I wanted to be in a situation where I represent the borrower and they pay me the fee,” and there was no entanglement with a bank or other lending institution. Mr. Zlotowitz says the split from Meridian resulted in a civil suit, where Meridian asserted that he had a verbal non-compete. Mr. Zlotowitz prevailed, he said, and the two settled out of court (he also said the matter went to rabbinical court). A Meridian representative declined to comment on the settlement.

But Mr. Zlotowitz has no bad blood at all. “It is not important; all business comes from God,” he said.

Since 2001 he has steadily built a business, starting off with Flatbush, Brooklyn and Bethesda, Md. offices. Three more offices—in Monsey, N.Y., Howell and Jerusalem—sprung up along the way. In September 2014, Mr. Zlotowitz decided the business was in good enough shape that he could return to the daily grind of doing deals and relinquish control of some of the management duties.

“I felt like at this time there was enough infrastructure put together that I could hand it over to an experienced CEO and say, ‘Here is a business to run,’” Mr. Zlotowitz said. He tapped Avrom Forman, formerly the head of a telecom called Vivaro Corporation, for that role in February of 2014.

Mr. Forman and Mr. Zlotowitz agree that the new division of labor allows everyone to use their talents. “It’s very hard to sit all day and make cold calls,” Mr. Forman said. “There are some people who are very good at it,” he added, a nod of the head indicating Mr. Zlotowitz.

The road to “the quality shop,” is paved with technology, in Mr. Zlotowitz’s mind. As information is more widely available, his approach, wherein a broker provides all of the information available to the borrower and tries to customize the product that fits best, is looking like the future of mortgage brokerage.

“A lot of people have a handful of clients, but Ira uses a bunch of database sources to know when the mortgages are coming due,” said Joe Orefice, head of commercial real estate lending at Investors Bank, which has had a steady relationship with Eastern Union, closing about 100 deals per year by Mr. Orefice’s estimate. “It’s a comprehensive canvassing effort. He’s quite a visionary.”

It’s an approach other brokerages have also taken. “Marrying technology and people resources—that’s the new approach,” Mr. Orefice said. “Ira has taken that and mashed it up a little bit. He’s leveraged it.”

And while Eastern Union has surely completed some larger deals, blockbuster deals are not a focus. Eastern Union this year closed a $50 million acquisition loan for a 14-building Bronx portfolio and a number of construction loans to New York developers in the $10 million to $20 million range. But Mr. Zlotowitz would rather not dwell on size.

“I’d rather shy away from those larger deals,” he said. “We focus on the below $50 million market.”

Instead, what is important to him is developing a pedagogy wherein brokers learn how to use tools like his proprietary database that tracks comps and maturities, which he says he spent more than $1 million to develop, and to augment the tools themselves.

The support the database provides is more than research. “Really, it’s full fledged underwriting,” which brokers can even access from the road, he said. Having a researcher run the numbers on a deal while they are out in the field makes brokers more responsive, and keeps them from promising they can deliver on a deal that won’t work. “Deals that should not happen—we aren’t doing them,” Mr. Zlotowitz said.

And when he does hire people, they’ve been vetted by his five-person executive team, a rotating cast of execs who need to agree on any personnel addition.

Many brokers Eastern Union hires are straight from religious high schools or college, or come from a different field. Only one current employee, to Mr. Zlotowitz’s knowledge, was a mortgage broker before coming to his firm.

When he talks about hiring, Mr. Zlotowitz is animated, delving into an involved analogy based on a Jewish parable, that, honestly, Mortgage Observer couldn’t follow. But one thruline is apparent: he believes that with the right training and mutual respect, brokers and management can get through lean times and capitalize on the good times.

The analogy is just one of many instances when the intersection of business and religion came up during our interview. Many times when discussing his success, Mr. Zlotowitz was sure to mention, first and foremost, that success in business “comes from God,” and he cannot take primary credit. Many of the brokers at Eastern Union observe Orthodox Jewish traditions, and while women are employed at Eastern Union, female visitors are advised that not everyone shakes hands with the opposite sex.

The firm boasts seven female brokers in its New Jersey office and three in Israel. For many social events—like the company’s 12th anniversary celebration, for which Mortgage Observer was present—separate meals for the women are served in an ancillary room.

“Religion is a private matter, but we will respect anybody’s observance,” Mr. Zlotowitz said.

Despite his perhaps bearish forecast, there are sections of commercial real estate finance that are growing, according to Mr. Zlotowitz.

“Construction is creeping up; it’s the fastest growing,” he said. The portion of their business in construction finance has grown from the single digits to about 10 percent of total volume in 2014, he said.

At the beginning of the year, in an interview with The New York Times, Mr. Zlotowitz said he thought his firm would do $3 billion in business in 2014. As of this printing, that hasn’t quite come to pass, but he said total volume would hit “$2.9 [billion] and change” for the year.

“Purchases have been moving up, but I think … when interest rates move up a drop, purchases are going to come to a halt,” he said. “It’s going to be an interesting year.”