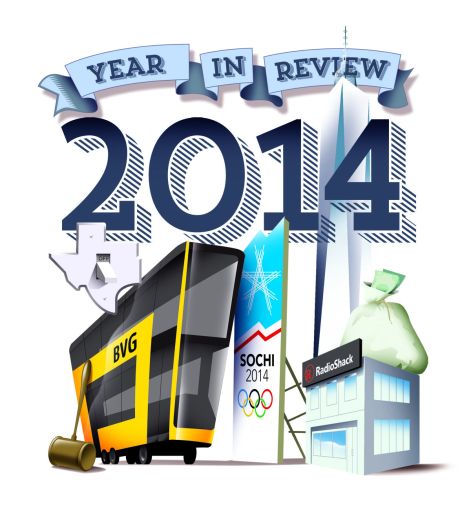 It was another year of highs, lows and mammoth deals.

While concerns about the Ebola epidemic and increasing violence abroad rattled markets in 2014, the year nonetheless brought jobs growth, rising stocks and an improved real estate market to the U.S. And while uncertainty about rising interest rates, rising construction costs and ever-higher land prices in New York City mar the outlook for 2015, each year we inch towards recovery brings greater stability.

Of course, the specter of China’s ascendance, a double-edged sword for the American economy, is a wild card. China overtook the U.S. as the world’s largest economy in 2014, and at the same time Chinese investments in U.S. real estate reached an all-time high.

Mortgage Observer took a look back at the twists and turns of 2014. Here’s our breakdown.

J.P. Morgan Chase & Co. sues Berlin’s public transportation provider, Berliner Verkehrsbetriebe, in a London court to recover $204 million plus interest that the investment bank claims it is owed over a derivatives contract taken out before the financial crisis.

Deutsche Bank originates a $350 million loan for the former Helmsley Carlton House hotel at 680 Madison Avenue. Gary Barnett’s Extell Development Company and Angelo, Gordon & Co. bought the building in 2010 for $164 million and are in the process of converting its upper floors to luxury co-op apartments.

The $50 billion Sochi Winter Olympics come and go, and high hopes among local developers for an ensuing real estate boom are quickly deflated. Just a few weeks after the games, local shops, restaurants and hotels see a sharp decline in business. A local photographer later describes the Russian resort as a “ghost town.”

RadioShack announces a plan to shutter up to 1,100 of its 4,000 stores to cut costs. An agreement between the electronics store chain and its lenders, which include Salus Capital Partners and GE Capital, later limits the closures to just 200 stores.

The Senate Banking Committee announces bipartisan legislation to phase out Fannie Mae and Freddie Mac. Under the bill, private capital would have to take the first 10 percent of all mortgage losses, effectively wiping out a large portion of the federal backing for repackaged loans.

It’s lights out for one energy company. The Texas power giant Energy Future Holdings Corp. falls victim to plummeting natural gas prices—with its debt topping more than $40 billion at one point—and files for one of the country’s largest bankruptcies. Several investment firms, including Apollo Global Management and GSO Capital Partners, the credit arm of Blackstone Group, buy up the struggling company’s discounted debt.

TIAA–CREF agrees to buy the Chicago-based investment management firm Nuveen Investments for about $6.25 billion, which includes the assumption of debt. The deal gives TIAA–CREF an additional $221 billion in assets under management, making it one of the country’s largest money managers.

Target announces the resignation of its chairman and chief executive officer, Gregg Steinhafel, following a difficult year for the big-box retailer. In 2013, Target became the victim of a data breach that punctured company profits. Mr. Steinhafel’s resignation is followed by a string of store closures.

Office Depot announces plans to close at least 400 U.S. stores over the next two years in an effort to consolidate operations after acquiring competitor OfficeMax in 2013.

ISIS militants seize the northern Iraqi city of Mosul, including its airports, television stations and governor’s office, and free an estimated 1,000 prisoners there. In the following days, ISIS takes control of the city of Tikrit, the town of Al-Qaim, which borders Syria, and three other Iraqi towns. With energy prices spiking as a result of the sectarian violence, economists begin to fear an interruption in the supply of oil from Iraq in the near future, which could negatively impact the U.S. housing market.

Bank of China wraps up negotiations for nearly $550 million in HFA financing, with credit enhancement, to fund construction of the Moinian Group’s 80/20 development at 605 West 42nd Street, sources familiar with the transaction tell Mortgage Observer.

The U.S. Justice Department imposes a record $9 billion fine on the French bank BNP Paribas for helping its clients bypass sanctions against Cuba, Iran and Sudan. The federal regulators also ban BNP from conducting “certain U.S. dollar transactions” for one year, restricting a vital part of the bank’s global business.

Bank of America agrees to pay $16.65 billion to end federal and state probes into its mortgage bond sales, U.S. Attorney General Eric Holder announces. The fine, which takes the form of penalties as well as consumer relief, marks the largest civil settlement with a single entity in American history.

Texas mega-developer Hines closes on the purchase of air rights for its slender Jean Nouvel-designed tower planned for 53 West 53rd Street as well as an $860 million loan to fund the development. The financing is led by Singapore’s United Overseas Bank with participation from fellow Singaporean institutions OCBC Bank and DBS Bank and Kuala Lumpur-based Maybank.

Rising Ebola fears roil Wall Street. A study by the World Bank suggests a potential economic drain of as much as $32.6 billion by the end of 2015, if the epidemic spreads into neighboring countries, beyond Liberia, Guinea and Sierra Leone, The New York Times reports.

The Zeckendorf brothers receive a $450 million construction loan to build their 31-unit condominium tower at 520 Park Avenue, a source close to the deal tells Mortgage Observer. The lender is a London-based philanthropic organization called the Children’s Investment Fund.

Six banks— Citigroup, J.P. Morgan Chase, Royal Bank of Scotland, HSBC, UBS and Bank of America—agree to pay $4.3 billion to four national regulators, including the U.S. Commodity Futures Trading Commission and the U.K. Financial Conduct Authority, as part of a settlement tied to allegations of foreign-exchange benchmark rigging. The U.S. Justice Department begins an investigation into criminal misconduct by the banks and their employees.

An ongoing dispute between the owners of the shuttered Revel Casino Hotel in Atlantic City and the bondholders behind a custom-built power plant serving the hotel kills a $110 million deal to sell the property to the Canadian private-equity firm Brookfield Capital Partners. Bloomberg News later reports that $119 million of municipal debt on the power plant may be nearing default after Brookfield drops its plan to buy the defunct resort. The hotel’s owners then move to block Atlantic City from collecting $32 million in unpaid property taxes.

One World Trade Center, the tallest building in the Western Hemisphere, opens for business after years of political disputes, delays and difficulty finding tenants.

China, again, overtakes the U.S. as the world’s largest economy by gross domestic product, according to the International Monetary Fund. The IMF says China will produce $17.6 trillion in goods and services in 2014, outpacing the $17.4 trillion produced by the U.S. (China had previously surpassed the U.S. in economic output in the mid-1800s.) Chinese investments in U.S. real estate acquisitions likewise reach a record high, exceeding $5 billion for the first time, according to data from Real Capital Analytics.

Mirach Capital Group—a motley crew of investors including Pras Michel of the Fugees and sports agent David Sugarman—agrees to lend $1.55 billion to the Sahara Group to refinance existing debt on the landmark Plaza Hotel and two other hotel properties, The Wall Street Journal reports. The investor group seeks to gain control of the assets by doing so.

The U.S. and Cuba begin talks to normalize relations after a 56-year standoff.

The final version of the annual spending bill approved by the House of Representatives removes the “push out” provision, a part of the 2010 Dodd-Frank Act that prohibited banks from trading some of their more risky products in accounts covered by the Federal Deposit Insurance Corporation or the Federal Reserve. The provision had aimed to keep some products, like credit default swaps, which helped spur the 2008 financial crisis, from being insured by the American taxpayer. Banks had pushed back against the rule for years.