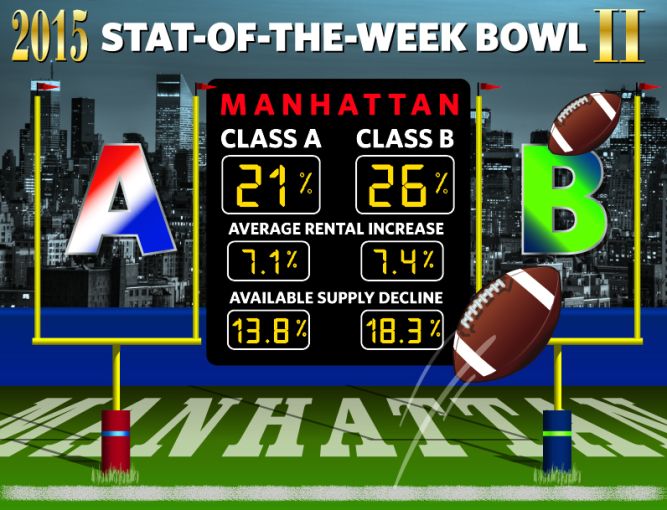 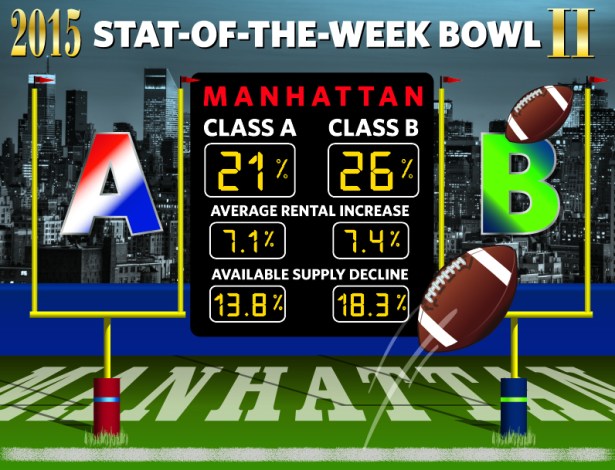 As the weather gets colder and the footballs get deflated, we know it’s once again time for the second biggest eating day of the year, Super Bowl Sunday. And what better way to prepare for the big game then by hosting the second annual Super Bowl Stat of the Week. Just as the Seattle Seahawks are trying to repeat as NFL champions, so is Class B office space trying to repeat as Stat of the Week Super Bowl Champion. So let’s see whether Class A or B had higher asking rental increases and larger decreases in the available supply in 2014.

The first half of our comparison equation is based on average asking rental increases for 2014. Manhattan Class A asking rents jumped out to an early lead with a 7.1 percent increase last year to $77.25 per square foot—a six-year high. But Class B asking rents came ready to play, posting a 7.4 percent year-over-year increase to $59.24 per square foot, ending the first half winning again by the slimmest of margins.

So Class B defeats Class A for the second year in a row by a score of 26 to 21 (percent). This outcome is in-line with my Super Bowl prediction of Seattle beating the New England Patriots and repeating as champions.

Richard Persichetti is vice president of research, marketing and consulting at DTZ.