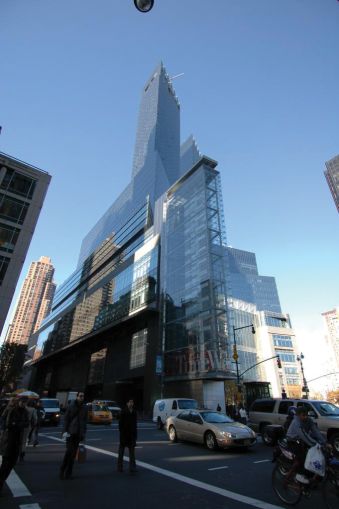 Time Warner's leaseback at the Time Warner Center was the year's biggest deal.

Whether it’s in your finances, love life, or weight, the New Year is a time to look back and take stock. So why not with the city’s commercial leases, too?

This year’s top 10 office leases together comprise roughly 6 million square feet of space—less than last year’s by 1.2 million square feet, according to Commercial Observer’s own research as well as data provided by Cassidy Turley and JLL. But last year’s deals were skewed by Citigroup’s decision to remain at its 2.7-million-square-foot offices at SL Green’s 388-390 Greenwich Street.

Last year, the top 10 list was squarely split between new leases and renewals, while this year’s has one more new lease and includes two law firms, even as law firms have been cutting back on the amount of commercial space they occupy.

Considering just new leases, there was a greater number of bigger leases—as in deals signed at 100,000 square feet or greater—than in any year over the last decade, according to Cynthia Wasserberger, a managing director at JLL. She put this year’s figure at 28 such transactions. Last year there were 19. (To give you an idea of how big some of these leases and some of the players were: in July, Savanna leased a 214,765-square-foot space in Chelsea to Twitter—but that still wasn’t one of the year’s 10 biggest.)

In 2014, there were two leases that exceeded 1 million square feet, both of which were renewals.

“When negotiating the new Time Warner lease in conjunction with the sale of the Time Warner Center we were not only helping to keep the status quo for Time Warner, but we also were providing an additional catalyst for the inevitable strong pricing,” said Douglas L. Harmon, a Senior Managing Director at Eastdil Secured, who represented Time Warner in the sale.

The second million-plus-square-foot transaction was for Credit Suisse Group, which renewed its 1.07-million-square-foot lease at 11 Madison Avenue in a 20-year deal. The banking and asset management firm occupies the first through 13th floors in the building that overlooks Madison Square Park.

But there were monster deals below 1 million square feet, too. Time Inc. will relocate its headquarters to 225 Liberty Street at Brookfield Place in Lower Manhattan. The media conglomerate signed a 15-year lease for 691,382 square feet across six floors at the property and will move to the Brookfield Office Properties’ development from the Time & Life Building in late 2015.

Sony Corporation of America signed a 15-year, 547,996-square-foot lease at 11 Madison Avenue. The U.S. branch of the Japanese conglomerate will occupy the top 10 floors of the building, as well as the rooftop overlooking Madison Square Park. Sony will relocate from its U.S. headquarters space at 550 Madison Avenue in early 2016.

Through an eight-year renewal, the Blackstone Group decided to remain at Rudin Management’s 345 Park Avenue, and tack on an additional 38,846 square feet, or the entire 27th floor. That brought the investment and advisory firm’s space to 489,495 square feet on various floors.

Online retail behemoth Amazon.com will open its first brick-and-mortar store after signing a deal for all of the office space, or 470,000 square feet, at 7 West 34th Street. Amazon’s 17-year deal gives them the ground through 12th floors in the Vornado Realty Trust edifice.

“This agreement is a first step that allows us to consolidate several key departments, including finance, human resources, information technology, legal and other corporate services into modern, state-of-the-art offices,” the hospital’s chief financial officer, Donald Scanlon, said earlier this year in a prepared statement.

Global law firm White & Case signed a 440,000-square-foot roughly 21-year new lease for its New York offices at the Rockefeller Group at 1221 Avenue of the Americas. The lease covers floors 41 and 43 through 50. One of New York’s oldest law firms, with operations in 26 countries, will expand from more than 300,000 square feet at the Durst Organization’s 1155 Avenue of the Americas into its new space in 2017.

Hudson’s Bay Company, parent company of Saks Fifth Avenue, plans to consolidate its New York City offices and relocate to 410,000 square feet at Brookfield Place through a 15-year lease, said Stephen Siegel of CBRE who was one of the brokers representing Hudson’s Bay Company in the fall deal. The transaction includes space at 225 Liberty Street and 250 Vesey Street.

Finally, Weil Gotshal & Manges signed a 15-year renewal in Boston Properties’ General Motors Building at 767 Fifth Avenue. The tony law firm will hold onto its 388,492 square feet on part of the sixth floor and floors 23 through 32. This remains the firm’s worldwide headquarters and largest office.