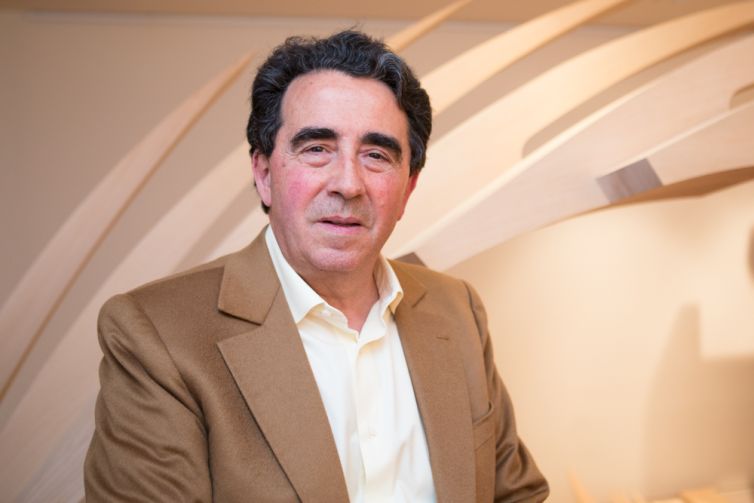 Like most of us, the visionary Spanish architect and structural engineer Santiago Calatrava remembers exactly what he was doing on Sept. 11, 2001. Mr. Calatrava was in Greece, working on a project for the 2004 Summer Olympic Games.

“I was in Athens speaking with the culture minister [the day after the attack], and the first thing he told me was that the world today is not the same as it was yesterday,” Mr. Calatrava recalled. He then visited the Parthenon, the ancient structure destroyed by the Persians in 480 B.C. and rebuilt under the order of Pericles. The restored edifice serves as a physical testament to Athens’ resilience and power.

The symbolism is profound. Years later, Mr. Calatrava, 63, would play a critical role in the reconstruction of Lower Manhattan, having designed the striking World Trade Center Transportation Hub and the St. Nicholas National Shrine on the site.

“I think our [transportation hub] particularly has an important dimension because it’s a public project. The towers are also enormously important for the skyline of the city [and what they represent], but indeed, our project is … linking important parts of the city together,” he said. “When you go [through] such an exercise you do not think small.”

Indeed, there is nothing small about the World Trade Center Transportation Hub. Today, the winged-structure, set to open in 2015 as the third largest transportation center in the city, encompasses roughly 800,000 square feet, including 225,000 square feet of retail space along the station’s concourses. According to the Port Authority of New York & New Jersey, the main transit hall of the hub eclipses in size that of Grand Central Terminal’s, which serves as a benchmark of iconic civic design. The station has the capacity to serve over 200,000 commuters. (It also cost roughly double its initial price, took a decade to complete and earned more than a few detractors.)

Elected officials and city planners have likened the new PATH Station to Grand Central, expecting it to serve a similar function to the Midtown landmark and further Lower Manhattan’s post-9/11 renaissance. Mr. Calatrava appreciates the parallel.

“I like the comparison. I like the challenge,” he said, adding, “it will be the gate and the [catalyst] for development of the whole area, as Grand Central has been, as Penn Station also has been.” He sees the transportation hub as a vital node, an intersection serving the rebuilt Trade Center, the World Financial Center and the revitalized neighborhood.

When Commercial Observer visited Mr. Calatrava’s sprawling Park Avenue townhouse, once owned by the Mellon family which he now uses as both a home and office, he was in his garden-level studio painting. His son, Gabriel, showed us to the grand salon on the second floor where Mr. Calatrava sat for over an hour, expounding on artists (Cezanne and Picasso), his belief that architecture is the most relevant art form, and his family. (His wife Robertina, sons Rafael, Gabriel and Micael, daughter Sofia and golden retriever Tiberius).

Having built seven of the major rail stations in Europe, “I came with experience …[and know] how fundamental [a transit hub] can be for a place,” Mr. Calatrava said.

But symbolically, it is the grand presentation of the transportation hub that elicits a sense of awe. The oculus design is meant to be transcendent, the aesthetic groundbreaking. Perhaps this is unsurprising coming from an architect who doubles as a sculptor and painter. But his melding of elegant design and utilitarian function has been a notable contribution of Mr. Calatrava’s to the field of architecture.

“Basically, what [Mr. Calatrava] did is he broke new ground in restoring to engineering a type of drama to its design,” said Mark Jarzombek, the interim dean of MIT’s School of Architecture and Planning who has known Mr. Calatrava since they were students at the ETH, the engineering, architecture and mathematics university in Zürich. “Back in the 1970s, engineering came out of a handbook. No one really designed a bridge, you put it together from a set of parts.” Mr. Jarzombek believes Mr. Calatrava changed that culture.

Rafi Segal, an architect and associate professor of architecture and urbanism at MIT, agreed with his colleague Mr. Jarzombek.

“[Mr.] Calatrava combines complex engineering solutions with new architectural expression. His work continues a long tradition of buildings and infrastructure elements that express the uniqueness and specificity of their structure,” said Mr. Segal. “When done successfully, the structure itself … becomes a new urban symbol, an icon of the city.”

Of course, highbrow art and design comes at a cost, and there has been no shortage of hubbub about the hub and its titanic cost. Though Mr. Calatrava said, “the collaboration with the city was very positive,” some politicians have been quick to point out the exorbitant price tag on the Lower Manhattan station. When proposed in 2003, the World Trade Center Transportation Hub was estimated to cost $2 billion; the final toll will be in the ballpark of $4 billion (the Port Authority, the agency that owns and manages the 16-acre World Trade Center site, repeatedly declined to comment for this story; however, in October the Port Authority’s Executive Director, Patrick J. Foye, sniped to The New York Times: “We would not today prioritize spending $3.7 billion on the transit hub over other significant infrastructure needs.”)

But when asked about this stark shift in price, Mr. Calatrava maintained he is not culpable.

“I have had nothing to do with the cost estimation nor the cost consult,” Mr. Calatrava explained. “You see the project is the same as we conceived in the beginning. [There have been] some changes, but [they have been minor] and are not as important as they may appear.”

Mr. Calatrava did say that some necessary security-related changes to the design were made following the rail attacks in Madrid and London in the mid-2000s. These incidents brought upon conversations with the police department, a series of consultations and appropriate shifts to maximize safety.

He also stressed that in any 10-plus-year project, inflation in construction prices takes its toll. Importing steel and every cubic foot of concrete from abroad is costly. And construction at a site with arriving trains and functioning subways presents its own set of challenges.

Mr. Calatrava contrasted the construction of the World Trade Center Transportation Hub with his work on Florida Polytechnic University’s new campus, where he designed the Innovation, Science and Technology building; this was the first building to begin construction as part of the school’s master plan. He recently completed the $60 million, 162,000-square-foot building, situated in the middle of this sparsely populated expanse of Florida (the local town has a population of 1,600), which finished $100,000 under budget.

And Father Alexander Karloutsos, the director of public affairs for the archbishop of the Greek Orthodox Archdiocese of America, said that Mr. Calatrava’s lesser-known project near Ground Zero, the St. Nicholas National Shrine, is on budget at $32.5 million.
“There have been discussions of overruns [with Mr. Calatrava’s work], but he’s stayed with us and the numbers are exactly what he said they would be,” said Mr. Karloutsos.

Mr. Karloutsos added: “It wasn’t just about the money. It was about the vision that our church wanted.” That vision included a building that was not only a sacred space for Orthodox Christians, but also one that memorialized and honored the victims lost at the World Trade Center.

Mr. Calatrava called it a miracle that the 114-year-old structure, named for the patron saint of seafarers and initially used to receive Greek immigrants from Ellis Island, was being rebuilt at all, after being decimated following the collapse of the south tower (for years, the Port Authority and the Archdiocese had been at odds over where and how the church would be reconstructed; a 2010 Wall Street Journal article called the relationship “frayed”).

Mr. Calatrava designed the space after the hallowed Hagia Sophia, which he called “the Parthenon of the [Eastern] Orthodox,” and the Church of Chora, another exemplar of Byzantine architecture.

“He took the best of the architectural design of the Hagia Sophia, which was the greatest church of Christendom, it was called the Church of the Holy Wisdom [and the Church of Chora] and took us into the 21st century,” said Father Karloutsos. “Based on those two buildings, [Mr. Calatrava] came up with what we feel is exactly the right kind of [church] that we wanted for the World Trade Center.”

Yet although the St. Nicholas National Shrine is dwarfed in size by the colossal World Trade Center Transportation Hub, Mr. Calatrava views both projects as foremost in his mind.

“I am not thinking [the Transportation Hub] is big and the church is small,” he said. “Both are very important projects to me.”

Mr. Calatrava, who has undertaken ventures in Athens and Buenos Aires, Valencia, his native city, and Zurich, called working on the reconstruction of Ground Zero “professionally an enormous honor.” He suspects he is not the only architect to feel sentimentally about the responsibility.

“Not only for every architect, but [also] every worker, [this project is] something special in your life,” said Mr. Calatrava. “Even more than 10 years after Sept. 11, we feel enormous[ly]…motivated and committed to deliver something special, because it’s such a special place.”

When retelling his own Sept. 11 narrative, Mr. Calatrava noted that following the rebuilding of the Parthenon, the Greeks experienced what is known as the Age of Pericles, a golden age in art, literature, philosophy and democracy for the metropolis. Similarly, he believes New York is embarking on a new era rooted in the reawakening of Lower Manhattan.

“It is our duty to show young people of tomorrow, you see, that we were courageous and we not only rebuilt, but we rebuilt even better,” he said. “We are rebuilding something that will transcend … for generations to come.”