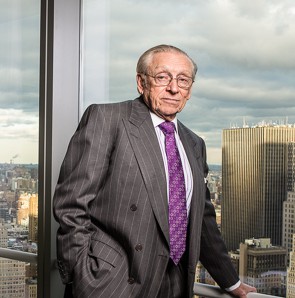 Few people can sit in their office, crane their head slightly, and point out the window to the nearby skyscrapers they own. Larry Silverstein can.

The 83-year-old chairman of Silverstein Properties and master leaseholder and developer of the World Trade Center site invited Commercial Observer into his office on the 38th floor of 7 World Trade Center, motioning both in the direction of the existing and rising towers on the Trade Center site and the almost-topped out condo and Four Seasons hotel by Robert A.M. Stern at 30 Park Place. “It’s exciting as hell,” Mr. Silverstein said with his signature enthusiasm.

SEE ALSO: Proptech to Keep the Talent Happy — and Coming to the Office

As the late afternoon sun streamed in, Mr. Silverstein fiddled with a remote control to bring down the blinds.

A few days before, he had been in China for a ground-breaking event at Silverstein’s 5-million-square-foot project in the Qianhai special economic zone. The company, with $10 billion of development underway and 10 million square feet of office, residential and retail properties in Midtown and Downtown Manhattan, recently opened the 445-key Four Seasons Resort in Orlando. That’s the largest Four Seasons in the world, Mr. Silverstein said, adding that his “hunch” is that his company will build “a couple more” Four Seasons.

But CO asked Mr. Silverstein to recap the year at the Trade Center and share his views on the many parties involved there, including the elected officials who have also left their mark. Mr. Silverstein often takes the bulk of the attention at WTC, however, and he’s not slowing down from his frenetic pace.

Commercial Observer: Can you summarize the year’s progress at the Trade Center?

Mr. Silverstein: There were amazing accomplishments in 2014. Probably the most notable from my standpoint is the fact that we were striving to arrange the construction loan financing for Tower 3. It was a massive effort. We had employed the combination of Goldman Sachs and JPMorgan Chase to do a bond issue and to try to accomplish the financing for us. And it was tough, tough, tough, tough—impossible, impossible, impossible. Until, suddenly, the market opened up. They let us know that they thought the timing was now becoming perfect to accomplish this and that they would like to go to market as quickly as possible.

So we went out for the financing and by golly, they oversold it totally. We raised $1.6 billion of triple tax-exempt bonds. To people who can use triple tax-exempt money—not everybody can—it’s a glorious opportunity. So the public that buys this sort of thing came in and bought $1.6 billion fast, very fast. So this is a construction loan followed by permanent financing for a 30-year term and the all-in interest rate was 5.3 percent—which is remarkable, absolutely incredible. Truth to the matter is, we now have $1.6 billion in the bank with which to build the building. If you look out the window you can see a lot of people working over there building it.

What do you think were some of the highlight leases at the Trade Center this year?

We’ve got some hugely important leases in Tower 4. MediaMath is one. Morningstar’s another. IEX [Group]. There are now a whole series of high-tech companies who are now looking at the space in these buildings as being ideal for their purposes. Of course, one begets another, begets another. And so, earlier in the year, we signed a lease for half a million square feet in Tower 3 with GroupM. They’re a major advertising-type firm. They are as high-tech a company in the advertising branding field as you could look for.

[They’re] all young people; young, smart, very competent people. Very knowledgeable. And typical of the people who live in this part of the city. This neighborhood down here blossomed, so you’ve got 60,000 people living down here now, which you didn’t have before—and they just keep coming in. A lot of these people are young, high-tech people who want to be in the middle of all this activity and be surrounded by all the stuff that’s going on. It’s happening. And it certainly makes us feel pretty damn good, I’ll tell you that.

It was fairly critical.

He tends to be critical, I don’t know why. I will tell you that I like the building, and there’s no way I could not like it, because we designed it. We chose Skidmore [Owings & Merrill] and we worked together to get the building designed. We negotiated the construction contracts. We negotiated the deal with Tishman Construction [Corporation]. We negotiated everything and put the whole thing to bed, and then handed it to the Port Authority as part of our transaction. And so, why Kimmelman? I don’t agree with all of his positions, but I like the building, I think it’s a beauty. And I think it shows beautifully.

Are you pleased with how the Durst Organization has handled the leasing and development after buying a $100 million joint stake?

I think they’re doing a commendable job for the Port [Authority]. The Port needed professional real estate operators and the Dursts brought that. Of course you look to Condé Nast, and you realize it’s a major step in the right direction.

Do you see any barriers toward completing the whole complex, including the buildings you’re developing and all the others slated for the site?

Well we’ve got one more building to go after [Tower] 3 and that’s Tower 2. The thing I would suggest to you is: stay tuned as to what might happen in connection with Tower 2. I think 2015 will be an interesting year in the life of Tower 2.

I also think that 2015 will be a very interesting year in terms of completion of the PATH Terminal. That’s supposed to finish toward the end of next year. It will be a magnificent building when it’s done. Costly, yes. Complex, yes. Difficult building to complete, yes. But spectacular—unbelievably so. I think it’ll be a gem in this city’s arsenal of gems. We’ll just be thrilled to have it be part of this.

You are the one most identified with this site, despite the involvement of many other stakeholders. Does the press give you a fair shake?

I don’t think about it anymore. I used to think about that years ago, but, after awhile, it sort of left me. It didn’t become important anymore.

How do you define your relationship to the Port Authority at this site?

They are our landowners. And we pay them a ground rent every year [Silverstein Properties has paid $3 billion to the Port Authority since 2001 and forwards around $100 million per year in rent for the 99-year ground lease of the site, a Silverstein spokesman said]. We also have gotten to the point where we work very well and closely together. There were many strains in the earlier years. Those issues are behind us, fully. I think that the collaboration is strong, solid. And I think what we’re both really, highly focused on is doing our damnedest to make this the best possible place we can. And that’s with respect to our buildings, their buildings, whatever it is, to do the best we can by this site.

We’ve been at this for so many years. So, for us, it’s been a particularly long haul, an important haul. I told Gov. [George] Pataki a number of years back that I’d give the rest of my working life to get the damn thing finished. I never knew it was going to take this long, but here we are, still working on it.

What elected officials do you think are doing a good job? How do you decide which ones you support?

Today you’ve got Gov. [Andrew] Cuomo working as the governor of the state of New York, Gov. Chris Christie in New Jersey. They certainly are interested in seeing this completed well, solidly, as quickly as possible, certainly—to the extent that it’s public money—within budget. They’re not concerned about [our money]. We watch our budget very closely because it’s our money and, unfortunately, public money is not focused to the same extent as private money … But we certainly have an interest in our public officials and our public leadership in doing the best they possibly can with what’s going on down here. And so do I support them? Sure. I think they’re commendable. All I say is, “God bless them, they’ve got lots to do.”

What about Mayor Bill de Blasio? Do you think he is doing a good job working with the real estate industry?

They’re certainly trying to augment the supply of subsidized housing, that’s the de Blasio effort with respect to the real estate community. And so he’s doing his damnedest here. The extent to which he succeeds will become a function of what happens tomorrow. Are the things he’s looking for reasonable? Are they rational? Are they accomplishable? There are some out there who would say they’re not, because the costs just don’t make any sense. But there are others who say, “We need to try, we need to endeavor to accomplish it.” At the end of the day, will it work? It’s difficult to see at this moment in time. But time will tell. The next six months of the year will be very indicative of what’s accomplishable here, in terms of housing.

One more question: Are we going to see any sequels of “Larry and Bob” like the promo for the 30 Park Place development?

At the moment, this is it. What’s going to happen for tomorrow? There could be others. Exactly where, I can’t tell you, yet. But there’ll be others, without a doubt, without a doubt in my mind.