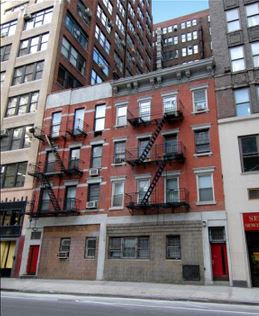 Jaz Patel, a principal with Long Island City-based hotel investment group LeTap Group, has purchased the four-story walkup residential condominium building at 319-321 West 38th Street for $23.5 million, Commercial Observer has learned, and he is likely to erect a hotel in its place.

“This transaction was very complicated given the nature of the assets that were sold and the slew of parties involved,” said Robert Knakal, chairman of Massey Knakal Realty Services. “Selling a cooperative would have been much easier. Given escalating land values, we expect to see several more of these transactions in the coming months.”

Mr. Knakal represented the 16 sellers, the owners of the 16 residential condo units (primarily one-bedrooms), in the deal last week along with colleagues David Kalish and Jonathan Hageman. There were no other brokers involved in the deal. Eleven of the units are operated as rentals with a gross residential revenue of $282,900 per year and all of the leases expire before the end of 2015, marketing materials indicate.

“The land was worth much more than the sum of all of the individual units so the owners decided to sell,” a source with knowledge of the deal said. “Unlike a co-op, in which a super-majority can force unwilling shareholders to sell, the condo structure means that if there is one hold-out, the transaction cannot proceed.”

The site, between Eighth and Ninth Avenues, allows for 54,504 mixed-use buildable square feet, according to the marketing materials. The property was on the market for $24 million.