Highbrow in Harlem: Upscale Retail, Restaurants and Rents in the Neighborhood 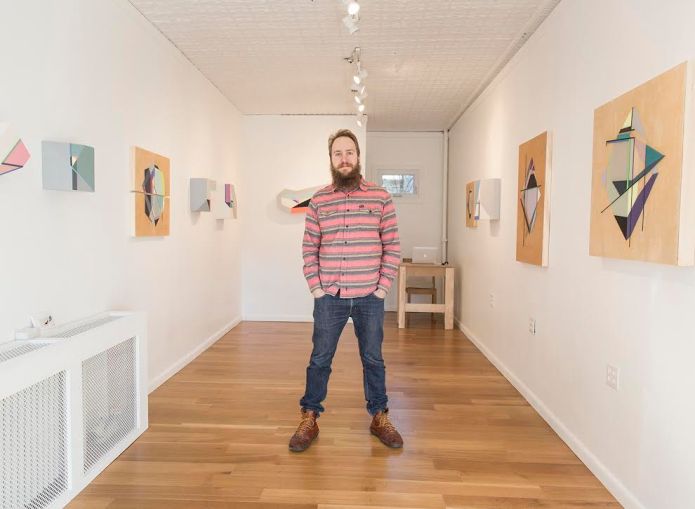 Avi Gitler, the founder and owner of Gitler & ___, in his Harlem gallery. dschlangerobserver

This past October, Esquire magazine held a star-studded soiree for its selection for America’s best new restaurant.

The crowd included heavyweights from the media, PR and culinary universes who traveled from the city’s farthest corners. The room was crammed. Libations were free-flowing. Trays of hors d’oeuvres inched slowly through the crowd when they weren’t devoured as they left the kitchen.

Esquire’s party was held at The Cecil, a new eatery and jazz club, which it bestowed with the highest honor. The restaurant is situated in a budding neighborhood where glistening condos are being constructed steps away, and a Whole Foods is rising nearby. In Harlem.

Harlem, the historic, broad stretch of northern Manhattan once riddled with crime, has steadily welcomed a host of new retailers into the neighborhood, including coffee shops, art galleries, bistros and brasseries. Many of the newer establishments (Whole Foods, slated to move into a space at 100 West 125th Street near Lenox Avenue, among them) are catering to a well-heeled clientele with an expendable income reflecting the success of a number of private-public initiatives to revitalize the area. And more stores are looking to come.

Jacob Morris, the director of the Harlem Historical Society, noted: “The retail scene in Harlem has really been transformed and will continue to become more closely aligned with mainstream retail in the United States. Landlords are looking for more triple-A retail tenants … if you’re a landlord and you sign a triple-A tenant, you’re going to get your rent.”

As a result, old standbys have been grappling with astronomical rent increases. When Fanta Pathe Gamby, originally from Mali, first opened Fanta Hair Braiding on Adam Clayton Powell Jr. Boulevard in 1995, the rent on her storefront was $700 a month. Now, it’s $5,000.

Mr. Morris said the demarcation point in the transformation of Harlem retail was the precipitous drop in crime under the Giuliani administration. During his tenure, former Mayor Rudy Giuliani also began removing street vendors from 125th Street (a New York Times article from the period noted that there were more than 1,000 vendors over five blocks), which was certainly controversial but ultimately laid the foundation for the mainstreaming of retail in this long underserved neighborhood.

In 2000, Harlem USA, a 285,000-square-foot, four-story retail and entertainment complex, opened on 125th Street and Frederick Douglass Boulevard, paving the way for significant investment along the corridor.

“Harlem USA gave a big-box opportunity that allowed for some of the larger retailers … to come in where there was not a sufficient footprint prior to [that development],” said Lloyd Williams, a fifth-generation Harlem resident and the president and chief executive officer of The Greater Harlem Chamber of Commerce. The organization’s scope spans from 96th to 168th Streets, from the Hudson River to the Harlem River. “Prior to that,” he said, “there was no modernized commercial space that had been upgraded in the previous 60 years.”

There was an acute need for more retail in Harlem then, and there remains a great demand now. According to Mr. Williams, the last census showed that there were approximately 683,000 people living in Harlem (in what was almost surely a low-ball estimate), greater than the population of San Antonio, Texas. If Harlem was its own city, Mr. Williams said, it would be the nation’s 26th largest. There are 17 institutions of higher learning located between 96th and 168th Streets, river to river. Of the 48 museums and historical sites in New York City, 14 of them are in this area.

Since Harlem USA opened its doors at the turn of the millennium, Harlem’s main artery has begun to resemble an outdoor shopping mall, with national and multinational brands including the Gap, American Apparel, Old Navy and Starbucks dotting the landscape. The Burlington Coat Factory has plans to move into a 70,000-square-foot space on the strip. Today, rents are often well north of $150 per square foot. The National Urban League will relocate its headquarters to a complex on the street that will cost an estimated $225 million to build, a project that will also include New York State’s first museum dedicated to the Civil Rights movement.

“I’ve often said that retailers travel in packs,” Ms. Consolo said. “You just need one willing to pioneer a neighborhood or market, and then the others will follow. Demand already is high in Harlem, and Whole Foods will attract even more and better retailers.”

Not surprisingly, this sea change has coincided with a drop in crime in the greater area. Off of 125th Street, the Tropical Grill at 2145 Adam Clayton Powell Jr. Blvd. has been serving Dominican food for the past decade. Maritza Mendoza, who has worked at the eatery for the past 10 years, says the neighborhood “has changed a lot” and is “much better” than in years prior.

While 125th Street still serves as the symbolic heart of Harlem, South Harlem (124th to 110th Streets, from Morningside Avenue to Adam Clayton Powell Jr. Blvd.) has undergone its own renaissance, evolving into a dining hub with an eclectic mix of restaurants. The blossoming of restaurants could be attributed to changing demographics and the wealth of local residents; according to the U.S. Census Bureau, the median household income for one of South Harlem’s zip codes, 10026, was $42,058 in current dollars from 2008 to 2012, up from $22,491 in 1999.

“We have more [and] better restaurants, which have attracted more and more affluent buyers,” said Ms. Consolo. “That is drawing more services and eventually [will draw more] retail.”

In its first few years, getting a table at Red Rooster Harlem at 310 Lenox Avenue, where President Barack Obama headlined a DNC fundraiser in 2011, was a contact sport. Lido, an Italian bistro on Frederick Douglass Boulevard, brought quality cavatappi and spinach tortellini to the neighborhood; down the block, Zoma set the bar for upscale Ethiopian food in a city where the cuisine has struggled to find its footing (when it comes to Ethiopian food, Washington, D.C. this is not). And The Cecil, located at West 118th Street and St. Nicholas Avenue in South Harlem, has received heaps of praise not just from Esquire but from food writers citywide.

All this and more, on a stretch that in memory had been blighted by abandoned and foreclosed properties and populated by prostitutes.

According to Jeremy Salzberg, a partner at Sugar Hill Capital Partners, which has worked extensively in Northern Manhattan, a corner property on the rezoned Frederick Douglass Boulevard south of 125th Street would likely rent for $90 per square foot, while a mid-block space would likely rent for closer to $70 per square foot. The 2003 rezoning led to 800 new housing units in the area. It also propelled the Aloft Hotel to open at the end of 2010, Harlem’s first new hotel in over 50 years.

Further north and west in Hamilton Heights, which spans from 125th to 153rd Streets and eastward from the Hudson River to St. Nicholas Park, rent is roughly between $55 and $65 per square foot, according to Mr. Salzberg. With City College (at 160 Convent Avenue) and Columbia University in the greater vicinity and large housing stock, Hamilton Heights has the bones that are ripe for retail, Mr. Salzberg said.

This sub-Harlem district is now a patchwork of old neighborhood storefronts and pioneering establishments, including the coffee shop The Chipped Cup at 3610 Broadway, watering hole Harlem Public at 3612 Broadway and physical and spiritual haven Asali Yoga at 601 West 149th Street.

“This neighborhood, especially near Riverside Drive, was lacking a good quality vinyasa yoga studio,” said Erica Robinson, director of Asali Yoga. “We hope we can fill that void.”

And in keeping with Harlem’s long history as a center for African-American artists, a surge of galleries have also recently joined the community—even if the artists and gallery owners are not exclusively African-American.

In September, Avi Gitler opened his permanent exhibition space, Gitler &_____, at 3629 Broadway between West 149th and West 150th Streets in what was formerly a beauty supply shop. Mr. Gitler resisted joining Bushwick’s arts scene in favor of a storefront in Harlem.

“There was a lot of pressure on me, I felt, to open in Bushwick given what’s happening [with the arts scene there] … and the artists I show,” said Mr. Gitler, who when he spoke with Commercial Observer was planning a gallery opening for later that evening. “Definitely Bushwick felt like the logical move.”

However, Mr. Gitler said that you “can’t compare the architecture and I would say, the sense of community you have here in Harlem, to Bushwick.” He described his gallery as “more Manhattan and less Brooklyn.”

Gitler &_____ is not the only gallery in town. Mr. Gitler said he knows of two other spaces that have opened in the greater neighborhood in the past month, including the Butcher’s Daughter at 318 West 142nd Street, which relocated from Detroit. He expects more to move in given the number of artists that call the community home.

For some, the changes that have transpired are too drastic, directly impacting longtime residents who helped cultivate the neighborhood’s identity.

“[The rising cost of rent] is a problem that will transform Harlem and make it so that African-Americans, African immigrants and Latinos won’t be able to afford having businesses on 125th Street,” said Michael Henry Adams, a historian and author of Harlem: Lost and Found.

For Ms. Gamby of Fanta Hair Braiding whose rent went up to more than seven times what it was in 1995, business used to be consistent, “but now, [there is] a lot of competition—and it’s not good.”

Mr. Adams noted that on 125th Street, commercial rents are comparable to those on Broadway between 72nd and 96th Streets in a community where, according to the last census, the median household income was only $36,000.

“I love Bed Bath & Beyond,” Mr. Adams said. “I love Whole Foods. No one doesn’t want to have nice facilities and services in their community. But the reality is, finally Harlem is becoming the place that we’ve always dreamed it could be, but the nightmare is that we’re being pushed out in order to make that happen.”

Not every property in Harlem has become unattainable for more moderate retailers. On Adam Clayton Powell Jr. Boulevard in Central Harlem, retail rents are decidedly more reasonable, hovering between $35 and $40 dollars per square foot. Mr. Salzberg said that while the trend is that retailers and businesses are moving further north, “we see it happening faster closer to Broadway than we do in Central Harlem.”

But Ms. Consolo thinks the time to invest in this historic neighborhood, with culture, green space, top academic institutions, theaters and accessible transportation, is now.

“Get in now, or literally pay the price later,” she said. “Prices are rising and quickly. A deal not made today will cost more in just a few months.”