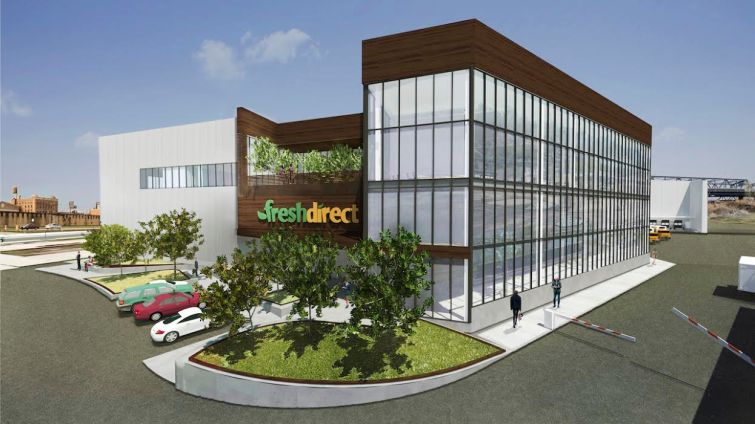 A rendering of the new FreshDirect facility in the Bronx, set to open in 2016.

FreshDirect broke ground today on its 500,000-square-foot property in the South Bronx, according to a press release from the online grocer.

The massive warehouse in the Mott Haven section was designed by Cybul, Cybul & Wilhelm and A + I and constructed by Schimenti Construction; it will serve as the new headquarters for the 12-year old company, which currently operates out of Long Island City in a facility the company says it has outgrown. The property is set to be open for business in late 2016 and will serve as FreshDirect’s corporate headquarters and food manufacturing and distribution facility.

According to the release, the new building has a number of green features, surpassing energy code requirements and using energy-efficient lighting, air conditioning and refrigeration.

The groundbreaking is a culmination of years of negotiations. Towards the end of his tenure, former New York City Mayor Michael Bloomberg bestowed more than $100 million in tax breaks to ensure FreshDirect remained in New York City after the company threatened to relocate across the river to New Jersey.

“New York is in our DNA and we are excited about our future in the Bronx,” said Jason Ackerman, FreshDirect’s chief executive officer and co-founder, in prepared remarks. “I am grateful for the widespread support we have received for our relocation and am looking forward to continuing our record of creating local jobs and strengthening our local community.

Not everyone has been supportive of FreshDirect’s relocation to this impoverished section of the Bronx (a 2013 AMNY article reported that 49 percent of children in Mott Haven live below the poverty line). Some local residents have fought to convert this property into green space and many have expressed concern that the diesel trucks traveling to and from the site will contribute to the area’s already acute air pollution crisis, according to the Riverdale Press.

Crain’s New York Business was first to report news of the groundbreaking.