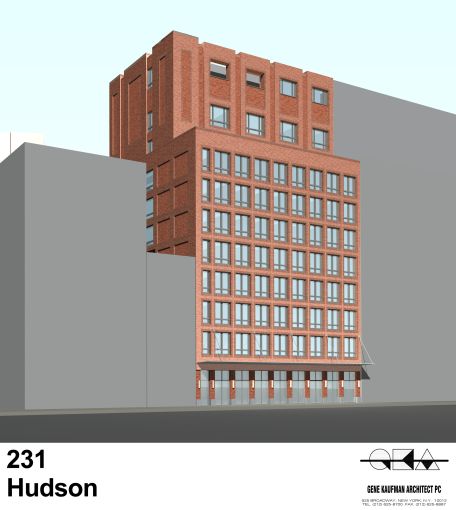 Commune Hotels + Resorts’ two planned tommie hotels appear to be shaping up in Manhattan as planned.

Architect Gene Kaufman has designed the two new value-conscious hotels which will have what he called “very compact rooms, like pod-sized rooms.”

The tommie brand is “an urban, micro-lifestyle hotel,” as a spokeswoman for Commune said. There will be a self check-in system, for example, and no mini-bar nor room service.

For tommie Hudson Square at 503 Canal Street, which is under construction, Mr. Kaufman has designed an 11-story, 97,000-square-foot hotel on a three-lot parcel. It will have 325 rooms all less than 200 square feet compared with the typical New York room of 200 to 240 square feet, Mr. Kaufman said. The hotel entrance will be at 231 Hudson Street and it will open in the summer of 2015. The owners of this project are Quadrum Global and Eagle Point Hotel Partners.

The exterior of tommie Hudson Square is “more of a contextual brick building, warehouse style,” the architect said.

At the tommie at 11 East 31st Street between Madison and Fifth Avenues, there will be 184 rooms over 36 floors in a 70,000-square-foot metal and glass building, Mr. Kaufman said. The foundation is complete, he said, and the hotel will open in 18 months. This hotel is owned by Quadrum Global, Eagle Point Hotel Partners, KSNY and Simon Baron Development.

Keith Schwebel from KSNY said there will be 250 rooms spread over 31 stories at 11 East 31st Street. Mr. Kaufman designed this hotel and Mancini Duffy is handling construction administration.

New York isn’t the only market in which Commune hopes to open tommie hotels.

“We plan to roll tommie out in key U.S. markets and eventually in Asia and Europe,” according to the Commune spokeswoman.

Tommie is the first brand conceived by Commune since the company was formed in October 2011, following the merger of Thompson Hotels and Joie de Vivre Hotels.

Update: This story was edited to include some details from one of the developers at the tommie hotel on East 31st Street as well as the name of the architect handling construction administration at the site.