The Plan: Now What at 155 Avenue of the Americas 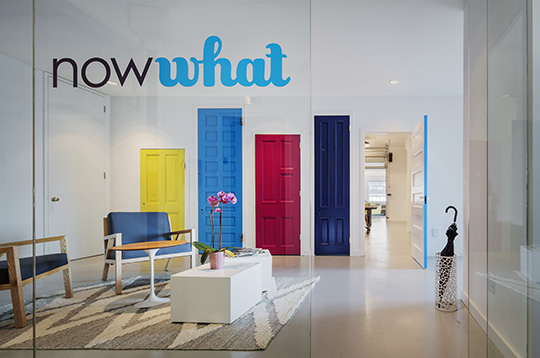 When Paul Barnett founded branding and marketing company Now What in 2004, he was the sole employee, making working out of his apartment on the Lower East Side economical and feasible. Since then, the company has ballooned to 30 people and has worked with high-profile clients including Google, ESPN, NBC, General Motors and Novartis. Yet Mr. Barnett remained adamant that his office still retained the warmth of a home.

Having already enjoyed the feeling of being in a residential space (Now What’s former office on Mercer Street was Mr. Barnett’s apartment), Mr. Barnett wanted to bring that quality to his new office at 155 Avenue of the Americas, between Spring Street and Sixth Avenue.

So Mr. Barnett, along with Now What Senior Strategist Allie Davis who specializes in innovation and design at the firm and architect Robert Finger, collaborated to convert 8,000 square feet in Soho into a home-away-from-home for employees (and many of their dogs who roam the office).

According to Mr. Finger, whose company Fogarty Finger has also worked with Vox Media and The Wonderfactory, a very small percentage of the overall layout is dedicated to traditional work space. Instead, Now What had opted for a communal area designed to be informal, which includes sofas and a communal table. Mr. Finger also found the “co-creation room,” a space that can be divided by a retractable garage door, unique.

“[In the co-creation room, employees] sit with clients and develop their marketing and growth strategies,” he explained. This is also where strategists conduct focus groups, a critical component of developing marketing strategies. Up to 30 people can fit into this large conference room.

The office’s desks are Steelcase furniture. “We like them because they’re easily personalized, have storage for personal items, racks for skateboards and planters that bring nature into the workspace,” said Mr. Finger.

The colors of the space are also meant to evoke creativity. The floor is a warm gray, with the majority of the walls a clean white. Strong accent colors, including citron, bold blue, fuschia and cyan blue, pop up throughout the space. There are also floor-to-ceiling white board walls.

In a nod to teamwork, Mr. Barnett sung the praises of Ms. Davis, whose father is an architect.

“[Allie’s] thumbprint is over everything,” said Mr. Barnett. “One thing Allie thought was very important was flow, [so the space is] designed so there can be lots of transitions.” Employees can often be found leaving their desks for a few hours for the standing desk or one of sofas.

Mr. Barnett also wanted a space where his dog, Cooper, and the other canines could roam.

“It’s really important to us [to have our dogs],” said Mr. Barnett. “Dogs are family, so of course we have our dogs with us. It’s not even like a question.”

155 Avenue of the Americas, Now What
Sales  ·  Development
Los Angeles