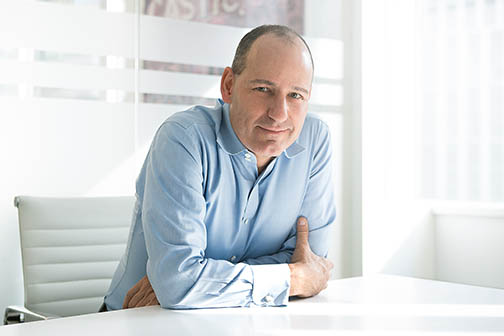 In a city where Class A properties consistently make headlines, Christopher Schlank, founder and managing partner of Savanna, has an eye for less-conspicuous Class B buildings. Throughout his career, Mr. Schlank has led the acquisition and redevelopment of more than 65 real estate assets totaling more than 19 million square feet, primarily within the five boroughs.

Just last week, Mr. Schlank’s firm, in conjunction with The Feil Organization, sold the 378,547-square-foot 21 Penn Plaza on southeast corner of West 31st Street and Ninth Avenue to TIAA-CREF. Mr. Schlank sat down with Commercial Observer to talk about this sale, his favorite job and the future of office buildings in Midtown East in a city that seems to be shifting westward.

CS: Savanna is a very focused, New York City-based real estate development and investment company; we buy value-add and we create core-plus. We buy real estate that’s not working, whether it’s debt, equity. We buy from banks or brokers or partnerships or from anybody else, and we fix it.

We love real estate. Every building has a personality; it has a good day, a bad day. It smells, eats, breathes, poops. And you have to understand every different building. When we renovate lobbies, each building’s different. They appeal to different people for different markets and sub-markets. And I think that the difference at Savanna is we look at real estate organically and we love buildings. We don’t like private equity. We don’t like financial wizardry. We love real estate, and that’s what differentiates us.

We’re in a private equity structure, but we’re not a P.E. firm. There’s a big difference. We are owners and operators of real estate.

How did you get started in real estate?

I started Savanna in 1992. I grew up in New York, went to [Collegiate School], went to U. Penn and majored in urban studies and French. I studied abroad in Paris. When I came back to New York after Penn, I got a job working for a single room-occupancy hotel on the Upper West Side called the Euclid Hotel. I worked there for two years doing construction. I went to Columbia [University] and did my master’s and met my partner, Jonathan [Bienstock]. As I tell the story, Jonathan had a lot of money and didn’t want to work. I had no money and wanted to work, so we were great partners. And in 92, we started buying distressed debt in Downtown New York City.

New York City in 92 was actually pretty good. We kind of got into the East Village when it was halfway there. New York had rebounded. I grew up on 71st Street and West End Avenue and back then Columbus Avenue [was] dangerous as hell. I used to get mugged going to school. It was a joke in the ’80s, if you went biking in Central Park, you got your bike stolen. So 92 was sort of the end of the recession of the late ’80s. But it was a great time to buy. I wish I bought a lot more.

21 Penn Plaza was a great deal. Jeffrey Feil tied the building up about two and a half years ago and he invited us to be his partner. We split equity with [him] and it’s a great location. [When Feil bought it] it was a location that was sort of on the edge. It was this great building on West 31st Street and Ninth Avenue; we renovated it, fixed it up, did some leasing and it just worked out great. 21 Penn is probably one of the buildings that you hate to sell because I think in the next two years, it’s only going to get better.

What are some of your other big successes of late?

[Twitter headquarters at 245-249 West] 17th Street. This was a labor of love. We put Twitter in here in most of the building. We bought this vacant and renovated it. This is what I love to do. I love design. [There are] wood floors from Vermont on the ceiling. But we [designed] it not with [Twitter] in mind [but rather TAMI tenants in general]. This is totally different than anything else we’ve done. I think out of anything, if anybody asks ‘What’s your favorite job?’ I think this is it. [It’s] 280,000 square feet. We bought it vacant. It was a big, big capital improvement [at] 29 million bucks. It was good because it was 100 percent vacant. This was just one of those things where you took a blank canvas and we made it amazing. And we sold it for a lot of money.

What designers do you work with?

We work with a variety of architects including Fogarty Finger, Studios Architecture, Environetics and Morris Adjmi. We are building a ground-up spec office building on 26th Street between 10th and 11th [Avenues] off the High Line with Morris.

So you believe in the Far West Side?

Unlike a lot of other high-profile firms, you are working with the B to B+ buildings. Why is this your strategy?

Because we can’t compete against Vornado, Brookfield, SL Green. We’ve never done the A.

No, I don’t want to. I want to buy the mid-block or unloved corners and love them. You have to find a niche. In our history, we were New York-focused from 92 to 98, and then we started expanding outside New York into Boston and Washington. We did that for 10 years—there were some great deals; there were some not so great deals. As you grow, you figure out what you really do. So over the past four years, we’ve actually contracted—now we’re just in New York City and the boroughs.

Why did you decide to contract?

We have 25 guys here—we know exactly what to do here in New York. We get the first call or the second call here. Washington? No. Boston? No. Why would we get the first call there? We’re here. We’ve been doing business here for 22 years. I think we’ve been good partners across the board. You have to understand, where do you fish? What do you do well? We know everybody here. And there are people who are rifle shot and then there are people who are shot gun. We’re rifle shot.

You own an industrial site in Newburgh, [N.Y.], which seemed out of context with the rest of your properties.

Kingston, Newburgh, Fishkill. Why? Because at certain points, you decide that you want to expand and you get seduced by cheap bricks. Newburgh is a great deal. It’s an industrial facility at Stewart Airport. Again, if you think about when you buy things, you want to be near transportation hubs. [It’s] the fourth largest airport. The Port Authority [of New York and New Jersey] bought it. They own it. They’re thinking about expanding cargo and passenger traffic. So we have a big, big facility. FedEx is a tenant and we have a wire company there. But again, that was 2003 or 2004.

Are you going to hold onto it?

Yeah. But that’s not what we’re focused on now.

You’ve worked extensively in Manhattan, but much of the industry’s focus is on Brooklyn’s renaissance. What do you think about Brooklyn’s potential as a central business district?

You know, it’s so funny. [In] Brooklyn, there’s so little office stock. I think Downtown Brooklyn is amazing because they rezoned in 2004 [under former Mayor Michael Bloomberg], so now all this residential is moving in on Flatbush, on Willoughby. You have MetroTech that was built by [Bruce] Ratner in 1990. This big, ugly [complex with] large floor plates. But there’s no cool office space down there.

So why not go in there and create some?

We’re trying. But there’s very little stock. When you think about it, in Williamsburg, Bushwick, it used to be Brooklyn was the overflow. If you couldn’t afford New York, you went to Brooklyn. You go to Brooklyn now because you want to live in Brooklyn. People that live in Brooklyn, they stay in Brooklyn. People who live in Williamsburg, they want to have an office in Bushwick, right? They get on the L. So Brooklyn is its own entity and it’s surprising that there’s no really good office stock. The problem is the residential market is so hot, that when you look at a piece of dirt, and you ask, ‘Am I going to build office or residential?’ You build residential. And it’s a problem. Right now, we’re in front of City Planning for an upzoning on our site [in Downtown Brooklyn] and their problem is there are way too many people living there. There are no schools. Transportation is becoming a problem.

How do you think [Director of the New York City Department of City Planning] Carl Weisbrod is doing?

I’ll let you know as soon as he approves my upzoning. Listen, whatever you think about [Mayor Bill] de Blasio—although there’s a shitstorm out there right now—I think he hired some pretty good people. Landmarks. City Planning. Housing. Carl’s a pragmatic guy who knows how to get shit done.

What do you think commercial real estate is going to look like in five, 10 years?

I don’t know. What interests me the most, there are two things: The Plaza District and Park Avenue and then Hudson Yards—there’s a tidal shift going west. So I want to know in five years, what is Park Avenue going to look like?

It’s not very cool to be on Park Avenue these days.

No. No one wants to be here. We rented this space in December for 70 bucks a foot. We rented to Twitter [in Chelsea] mid-block for $72. We’re getting more on West 17th Street mid-block than Park Avenue’s getting. And all the big companies want to go to Hudson Yards. New, efficient, great floor plates, blah, blah, blah. The biggest question is, “What’s going to happen?”

Do you think it’s the time to invest in Midtown East?

The problem with buyers in Midtown is that Midtown is controlled by large, well-capitalized owners. They don’t sell. They’re not going to sell for distressed. That’s the beauty of buying in Chelsea [and] Midtown South. You have smaller owners who are not as well-capitalized and who own their real estate for very little and see the upside.