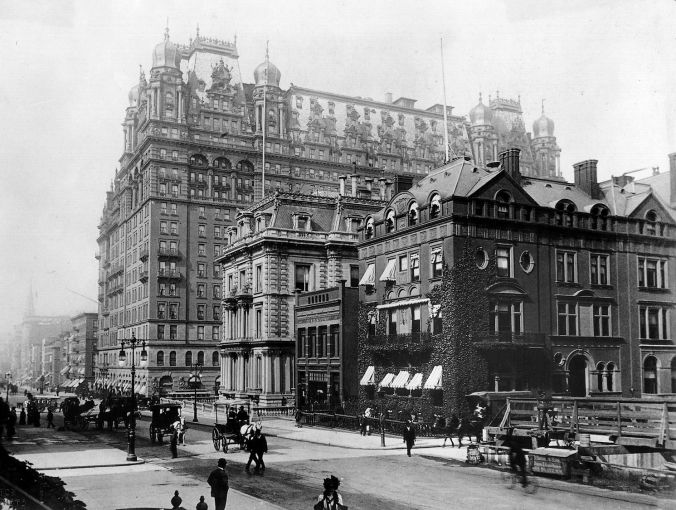 Millionaire attorney, politician and newspaper publisher, William Waldorf Astor, opens the first of two hotels to later become part of The Waldorf Astoria New York—motivated in part by a dispute with his aunt, Caroline Webster Schermerhorn Astor. The 13-story Waldorf Hotel opens on the site of Mr. Astor’s mansion at the corner of Fifth Avenue and 33rd Street, next door to his aunt’s house, on March 13, 1893. Mr. Astor’s cousin, John Jacob Astor IV, opens the 17-story Astoria Hotel on an adjacent site on Nov. 1, 1897.

The site of the Waldorf Astoria is sold to the developers of what will later become the Empire State Building and the two hotels the Astors built are torn down in May 1929. The second Waldorf Astoria hotel, designed by architects Schultze and Weaver, opens at 301 Park Avenue on Oct. 1, 1931, becoming the tallest hotel in the world. President Herbert Hoover, in a radio broadcast from The White House, cheers the new Art Deco hotel. “The opening of the new Waldorf Astoria is an event in the advancement of hotels, even in New York City,” President Hoover announces.

Weekend at The Waldorf, filmed at the Waldorf Astoria and featuring the actress Ginger Rogers, becomes the first major motion picture filmed entirely in a hotel in 1945. The film grosses $4.4 million and ranks No. 7 at the box office. Millionaire hotel owner Conrad Hilton inks a deal to acquire ownership and management rights to the Waldorf Astoria on Oct. 12, 1949.

Marilyn Monroe stays in the Waldorf Astoria’s $1,000-per-week suite for half a year in 1955, after leaving Hollywood for New York City. Ms. Monroe is photographed with playwright Arthur Miller, her then-husband, in the hotel’s Grand Ballroom for the “April in Paris” ball in 1957.

Mr. Hilton’s great-granddaughter, Paris Hilton, lives in the hotel with her family throughout the 1980s and 1990s. President Richard Nixon and Bob Hope meet at the Silver Anniversary of the National Football Foundation Annual Awards Dinner at the Waldorf Astoria in 1983.

The private equity giant Blackstone Group buys Hilton Hotels, including the Waldorf Astoria, for $26 billion in cash in the fall of 2007. A consortium of lenders, including HSBC and Wells Fargo, refinances $525 million in senior debt on the New York hotel in September 2013, city records show, as Blackstone preps to take Hilton public again. The hotel company returns to the stock market as Hilton Worldwide in December 2013.

In early October, Hilton Worldwide agrees to sell the Waldorf Astoria to Anbang Insurance Group, a Chinese insurance company, for $1.95 billion, which amounts to $1.4 million per room. Hilton will continue to run the landmarked hotel for another 100 years, according to the agreement. The deal is scheduled to close between Dec. 31, 2014 and March 31, 2015. Due to concerns about potential security risks, the U.S. government begins an investigation into the details of the sale and the buyer’s long-term plans for the Waldorf Astoria.