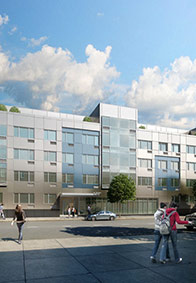 Colony 1209, an 127-unit Bushwick rental apartment building that opened earlier this year at 1209 Dekalb Avenue, has hit the market for $81.5 million, according to marketing materials from Massey Knakal Realty Services.

The five-story building, which is between Bushwick and Evergreen Avenues and was bought by Spruce Capital Partners for $58 million in April, has been dubbed the “most controversial building in Bushwick,” according to Bushwick Daily.

“Not only does the name of the building lend itself to the comparison of gentrification with colonization but also the building is marketed by the real estate brokers aptsandlofts.com as ‘Modern residences in a vibrant industrial setting…re-imagined through artful eyes in NYC’s new ‘IT’ neighborhood Bohemian Bushwick, Brooklyn,” the blog said.

The property is in the third year of its 15-year 421-a tax abatement.

Spruce Capital didn’t immediately respond to a request for comment and nor did the Massey Knakal brokers.