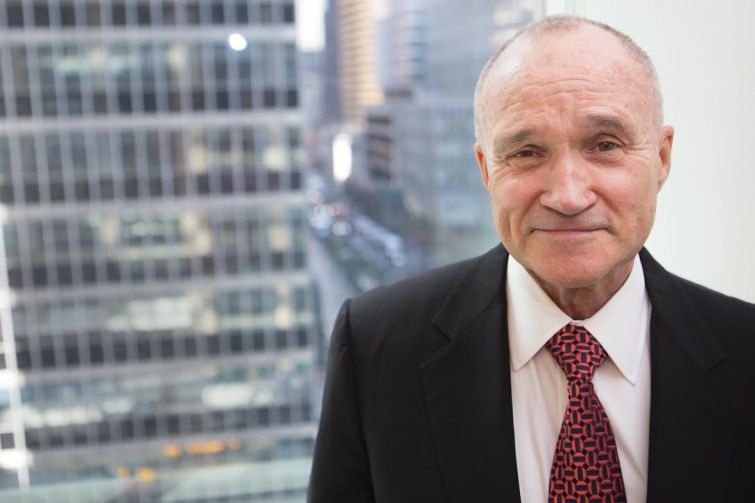 After nearly five decades of public service, former New York City Police Commissioner Raymond Kelly has moved to the private sector. Mr. Kelly stepped down as the city’s top cop in December 2013 and since March, has been working as the president of Cushman & Wakefield’s Risk Management Services, the first comprehensive service of its kind in the real estate industry.

Mr. Kelly, the city’s longest-serving police commissioner, sat down with Commercial Observer at Cushman & Wakefield’s headquarters in Midtown to discuss security concerns in post-9/11 Lower Manhattan, the role of the risk management group at the firm and his lasting contributions to policing.

Commercial Observer: As New York City’s police commissioner immediately following 9/11, you were in charge of ensuring that the city was secure. How would you compare security in Lower Manhattan today to before 9/11?

There were two successful attacks, of course, in the Lower Manhattan area, both of the attacks on the World Trade Center. And we knew that a robust security program, or regimen, had to be in place to make certain that people came back to Lower Manhattan and felt a level of comfort in working and residing there. So, the Lower Manhattan Security Initiative [or LMSI] was started in 2005, and its goal was to make the 1.7-square-mile area south of Canal Street the safest business district anywhere. The plan called for cameras in large numbers, technology such as license plate readers and detection devices, and additional police officers to be assigned as the World Trade Center site began to be re-populated and come back. And that’s indeed what has happened.

The plan, of course, covers more than just the 16 acres of the World Trade Center site. It’s all of Lower Manhattan. Its core is a coordination center that has both public sector employees, mostly New York City police officers, and representatives of the private sector. It includes some of the major occupiers of real estate in Lower Manhattan. Goldman Sachs, Stock Exchange, World Financial Center, Brookfield, companies like that. And they monitor, to a large extent, their own properties, but also work as a team to monitor all of Lower Manhattan.

Do you think that the Lower Manhattan Security Initiative is the single most effective tool that’s been implemented?

I would probably say that it is the single most effective tool. [As I said], there is a plan to increase the number of police officers assigned to that area as the World Trade Center continues to be built out.

If I’m not mistaken, there’s a similar security ring that exists in Midtown as well.

What we did is take the LMSI concept and migrated it to Midtown Manhattan.

You are now the president of Risk Management Services at Cushman & Wakefield. What does [your department] do?

We do three basic services. We do risk assessment [of] a whole panoply of potential risks to people, facilities and information. And we build common-sense, affordable mitigation plans based on those assessments. We also develop viable business continuity plans to make certain that businesses do everything they can, that in the event of an untoward act, a natural disaster, what have you, that they’re able to continue doing business. And if not, then they’re able to get back to operations as quickly as possible.

How does the Risk Management Services department differ from traditional security organizations, like Kroll, companies that have been doing this for a long time?

We look at the world through a real estate prism because Cushman & Wakefield is the third-largest commercial real estate company in the world. We’re in 60 countries. Our focus is primarily in areas that involve [the firm’s] properties.

Why does Cushman & Wakefield need someone with your experience spearheading this?

Ed Forst, the new CEO here, sees risk management services as a differentiator among the major real estate firms. This service is not provided by [any other firm] and he sees it as being a value-add to enhance real estate transactions.

Are you enjoying it so far?

Do you think that other firms will follow Cushman & Wakefield’s lead?

I think that it will depend on how things develop here, if it makes a difference as far as the overall business is concerned.

Part of what you do in your new role is crisis management. What do you think the biggest risks are to buildings and tenants in Lower Manhattan?

There’s a whole array of risks, certainly more than financial risks. As I mentioned before, risk falls into three categories: people, facilities and information. As far as people, it runs a whole panoply of risk and areas of concern, not just for areas of Lower Manhattan. It can go anywhere from pandemic—don’t forget this is an international firm—to an active shooter situation.

The F.B.I. came out with a report [a few weeks ago] that said there has been an increase in active shooter incidents, and about half of them are in businesses. For facilities, obviously you have to be concerned about natural disasters and terrorist attacks. And you have to be concerned not only about your own facilities, but other facilities that are near you that you may not own or control that may impact your own facilities. They can be targeted. Since we’re so interconnected these days, you have to take a look at your supply chains, your information chains. [They] could be impacted by an event in another city or another country.

You could have had a number of very interesting positions following your time as NYPD commissioner. What made you choose Cushman & Wakefield?

Well, Ed Forst, the CEO, is a dynamic leader and it’s great to work with him. This has a bit of a start-up element, and I like the challenge.

What do you think your legacy at the NYPD will be?

I don’t know. We’ll have to see. History will tell us.

What do you think your lasting contributions to policing are?

You know, I really don’t think about that. And maybe I should. Right now, I’m too engaged in current projects to really think about that. But maybe in the book [I am writing about my decades spent in public service], it will be developed.

Is there a release date [for the book]?

[It’s] too early for that. Ideally, next fall.

What are your reflections on Superstorm Sandy as we approach the two-year anniversary?

I think the city was as prepared as it could be. Sandy was such an aberration. You talk about the perfect storm. Everything that could have possibly happened that would have an adverse effect on the city and the area happened.

Was that your biggest challenge as police commissioner?

It was certainly one of them. We, ourselves, were impacted by it as far as the workforce. Police officers lost their houses. We had to focus on our internal well-being and providing basics of life to police officers and their families while continuing the service for people of the city. It was a big challenge. I was up in a helicopter that morning very early touring the devastation, and it looked like a bombing.

In Rockaway, there were fires burning, obviously in Breezy Point there were fires. It’s incongruous to see flames during a flood. It was really quite jolting. When I was flying over, I saw a police helicopter taking people off the roofs in Staten Island.

You live in Battery Park City. Did you have to evacuate?

I was out for a week. Other buildings down there were not affected. My building was right on the water, so we were out. I lived at police headquarters. Some people said I lived there anyway.

What do you think Battery Park City will look like in 20 years?

Everything that’s gone forward down there has been extremely well done. I think the Battery Park City Authority has done a very good job. I think things down there will continue to be first-rate. I have no reason to believe that’s not going to be the case in other areas of Lower Manhattan.

The World Trade Center site, you can see it now, no commercial building has been built to the standards that Tower One has been built [in terms of structure]. The first 20 floors are all mechanical [with all of the mechanics for the building and not occupied by tenants]. The building was moved back from the corner of Vesey and West Streets from where it was initially planned, back to 65 feet away [after the NYPD said the space was not sufficient to protect the building from a large car bomb]. It was 25 feet before. We were able to make our feelings known.

So you have no qualms about any tenants moving into 1 World Trade Center?

No. Not now. As I said, it’s probably the strongest commercial building ever built.