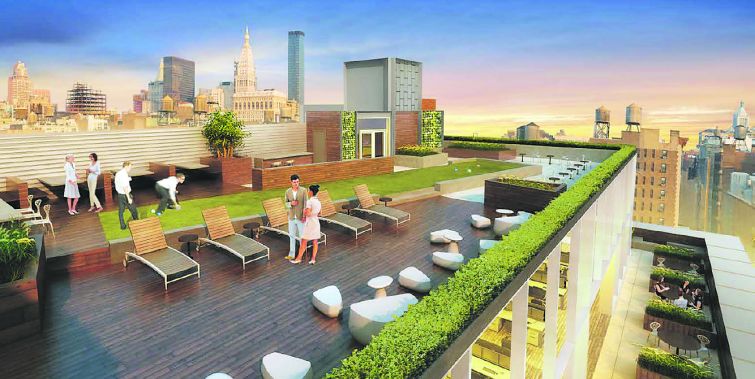 SL Green Realty Corp. is nearing completion of its 12-month, $15 million renovation and recombining of what used to be two separate buildings at 635-641 Avenue of the Americas between West 19th and West 20th Streets, Steven Durels, the company’s director of leasing and real property, told Commercial Observer. The company owns two of the three buildings that used to comprise one department store in the Ladies Mile Historic District after architect William Hume completed it in 1902. And shortly after purchasing the two buildings for $173 million in 2012, SL Green set about turning the building at 635 Avenue of the Americas, which had become an auto mechanic instruction school, into the second half of a repositioned office property. “When we bought the building, it was apparent to us that there was the opportunity to create something special,” Mr. Durels said. The building at 641 was already a complete office building.

> The auto mechanic school building needed extensive repairs and upgrades after the trade school had used it for hands-on auto work lessons, but that didn’t stop the building’s anchor tenant, business application software company Infor, from inking a lease for over 49,000 square feet in the gutted building for a total of 92,000 square feet in November 2013. Subsequent tenants followed suit in the building that used to have car entrances on the outside. “A lot of the work was to remove all that, to demo out the car ramps; because of its use, it had no infrastructure,” Mr. Durels said. “The net result was that we leased all of the office space before the work was done.”

> Four blocks south of Madison Square Park, the building offers a rooftop with Midtown South skyline views that should prove popular. “That’s a roof deck with an outdoor bocce court and an entertainment space,” Mr. Durels said. “The tenants can use it during the day or they can reserve it privately.”

> SL Green also installed a new 10,000-square-foot glass penthouse on the top floor of the eight-story building with a terrace that has a novel entrance from the office indoors. “It’s not just a door going out onto the terrace,” Mr. Durels said. “It’s a 21-foot wall that lifts up. I think it’s the only one like it in the city.”